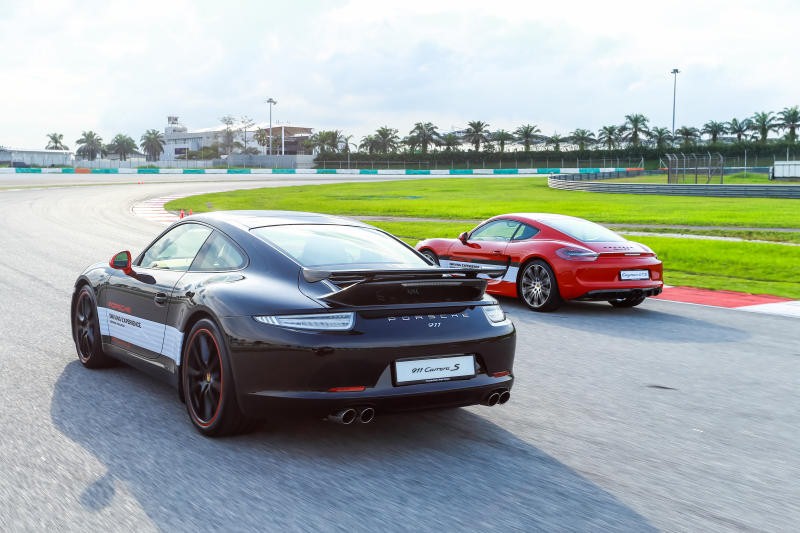 There's no better reason to get up early in the morning and head out to Sepang to sample all kinds of Porsche cars.

It was a day of surprises during the recent Porsche Driving Experience which was held at the Sepang International Circuit.

The first was the announcement made by Sime Darby Auto Performance chief executive officer, Arnt Bayer, that we, the members of the media, would get to drive the all-new Cayman GTS. 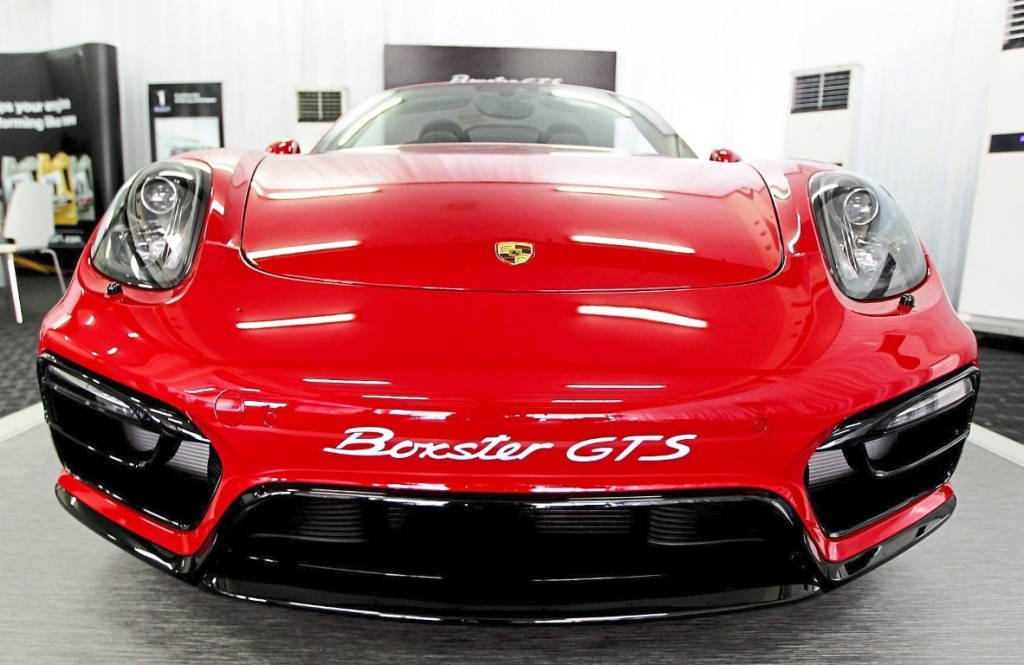 There was also the new Boxster GTS but that was purely for display purposes only.

The next surprise was the rain.

It wasn’t just a drizzle but a heavy downpour in the early morning. And it happened while we were involved with the various driving exercises prepared for us all around the Sepang track.

We would be mentored by a host of Porsche Carrera Cup drivers and Porsche instructors during the event which was organised by Sime Darby Auto Performance, the official importer of Porsche in Malaysia. 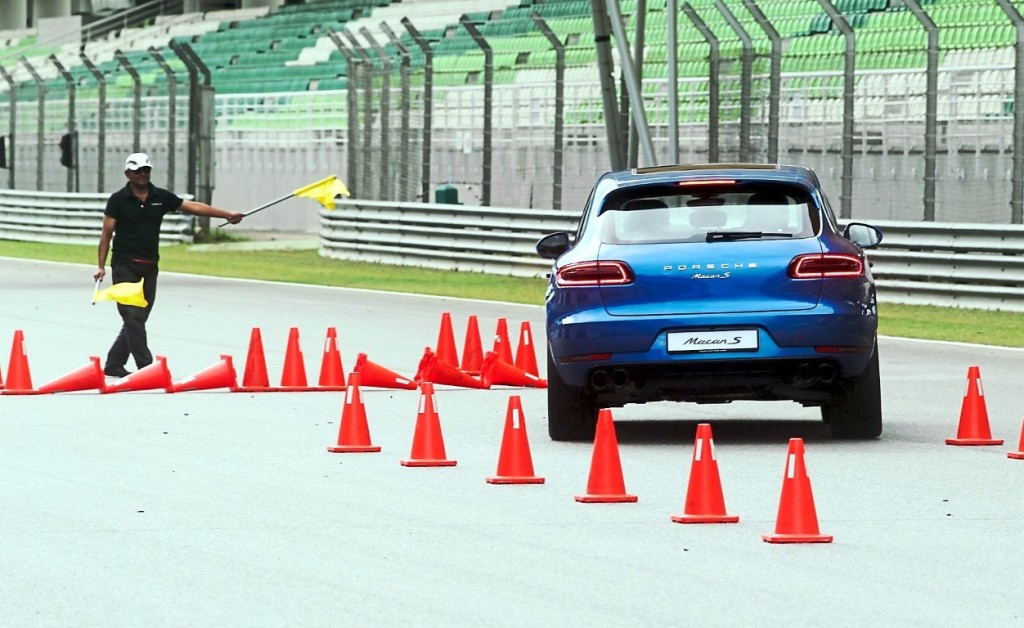 It gave all of us the chance not just to try out the cars in the track but the exercises would help us understand the capabilities of the Porsche vehicles and its safety systems as well as learn how to react during emergency situations.

A whole slew of vehicles from the Porsche stable had been brought out for this programme.

The first course was the slalom and we drove the four-door Panamera through a rather tight course.

Now the Panamera is quite long with the overall length measuring 5,015mm yet the car turned in and out of the slalom course at speed without the body rolling uncontrollably.

This is due to the Porsche Active Management System (PASM) which emphasises full control of the car in such situations.

Then we got to drift the Cayman GTS slightly during the skid pad test. 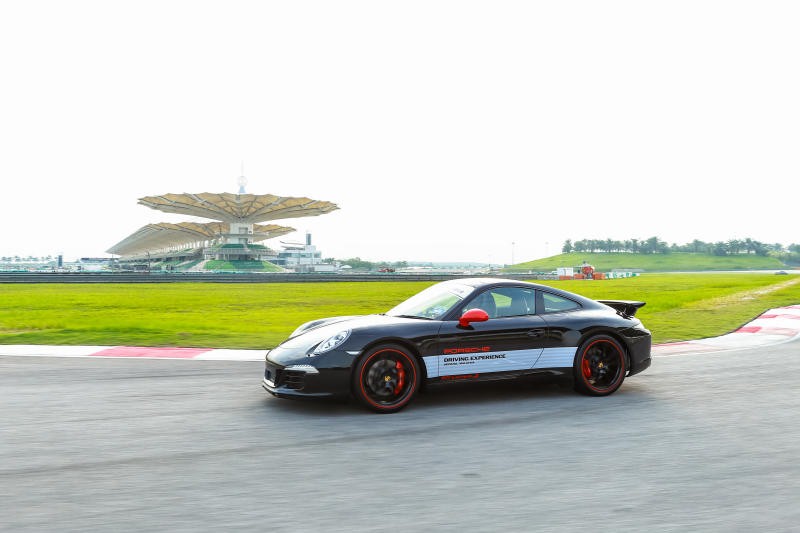 The track was wet, not only by the rain but hoses had been placed as to simulate wet and slick conditions.

This was to show-off Porsche’s Stability Management System (PSM) which would keep the car from spinning.

This course showed how easy it is for the Cayman to lose control at low speeds.

All it takes is to turn the wheel and suddenly slam on the throttle and the rear will give out but with the PSM turned on (you do have the option of turning this off) it will prevent it from happening.

The rain came pouring in as we tested the facelifted Cayenne diesel variant during the brake test and the compact SUV Macan S during the lane change or moose test which involves sudden high-speed manouvering and emergency braking.

It is a testament to Porsche and their technologies put in place in their cars like the aforementioned PSM, the Anti-lock Braking System (ABS) and the Porsche Traction Management (PTM) system, during these exercises. 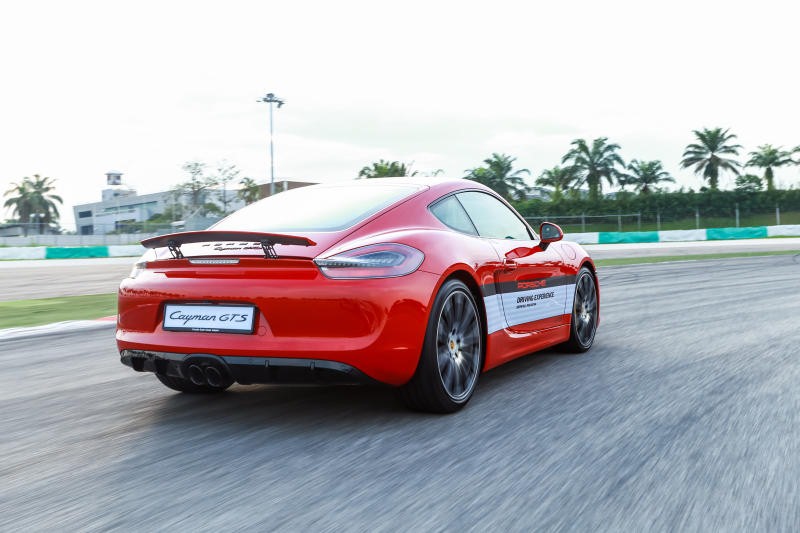 It was raining so heavily it was difficult to see and we wondered if we could pull of these tests at all.

It turns out the cars behaved exactly as it was meant to with all the swerving and hard braking.

Luckily, the rain stopped after the exercises but the track was still very wet that word got around that the track drive may be cancelled.

We waited as the Porsche instructors did a some test laps and it would have been heartbreaking if we didn’t hit the track because the cars prepared were the Cayman GTS and the 911 Carrera S.

It was a relief when we heard the call to get ready for the track drive and the first car I got into was the Carrera S.

What a beautiful car they had prepared for us that day.

It was almost stealth with the gloss black paint job but it had red trim on the wing mirrors and diameter of the rims. 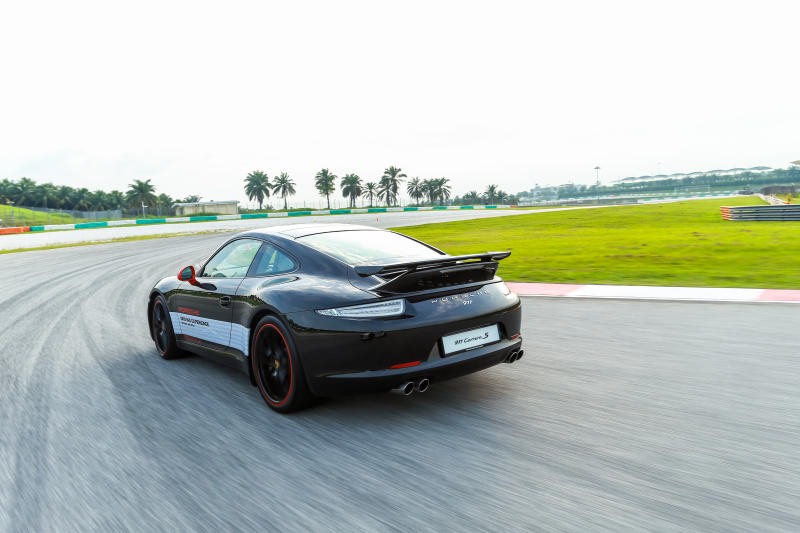 The Carrera S looked seductive and dangerous and as I drove it around the track with the instructor riding shotgun, I noticed how pronounced the exhaust note was and just by stepping the accelerator pedal, it just got throatier, louder and more thrilling.

I could feel the car was just rearing to go.

Of course, we could not put the pedal to the metal so to speak, because the track was damp but I learnt an important lesson from the instructor during the drive.

He had told me to trail brake during corners and, as the Carrera has a rear engine layout, the car becomes more balanced and the chassis stiffer thus you can take the corners more accurately. 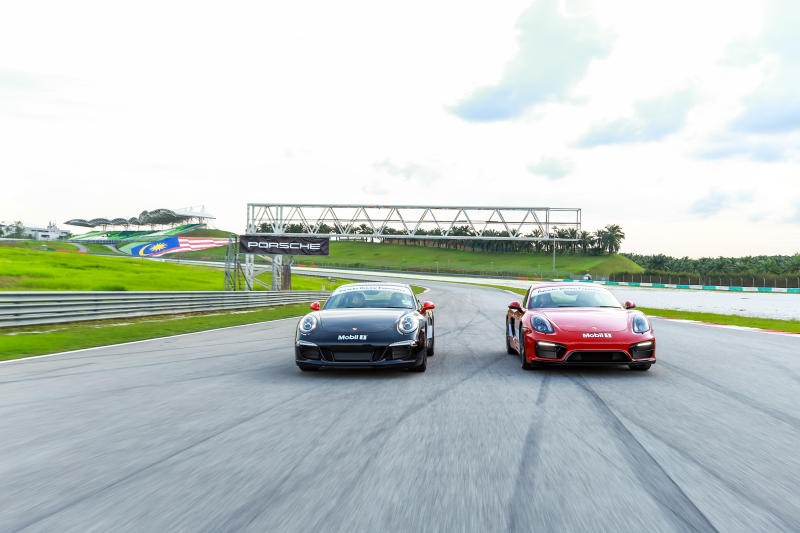 However, the mid-engine layout meant the car was more balanced and, in a sense, more manageable than the Carrera.

And this turned out to be the more fun car to drive.

I was just smiling all the way through the track with this car; I could go in and out of the corners and thought how smooth the acceleration, how sharp the braking and the crisp handling.

While the 911 is synonymous with Porsche, the Cayman is not simply standing on the shoulder of giants but is proving to be a worthy contender all on its own. 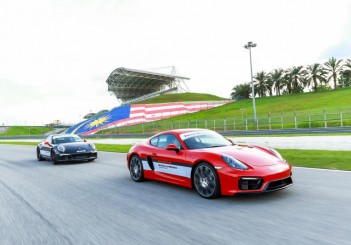 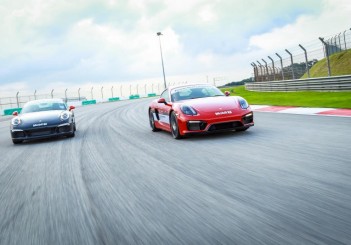 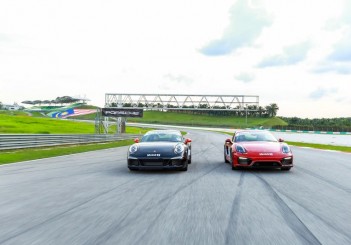 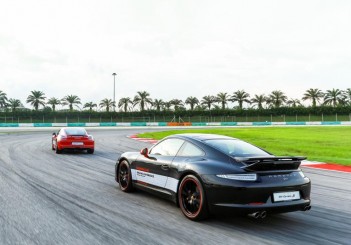 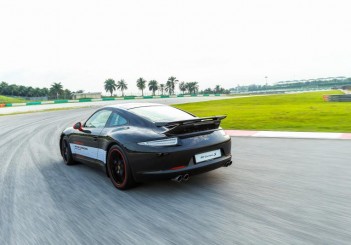 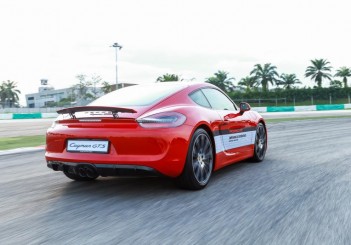 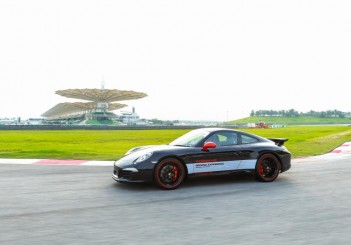 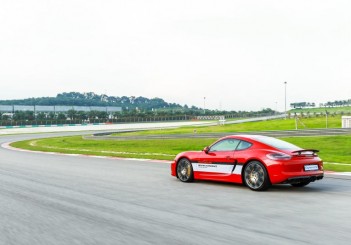 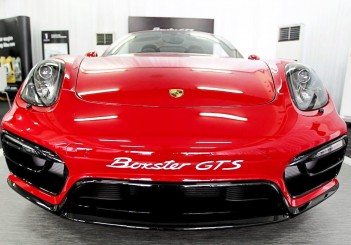 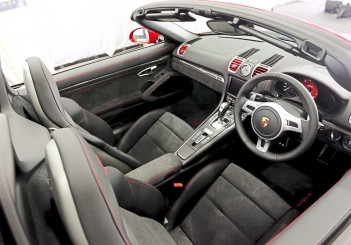 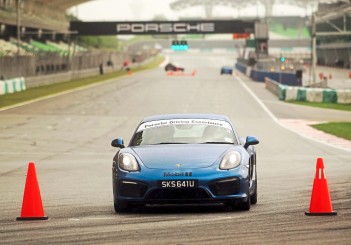 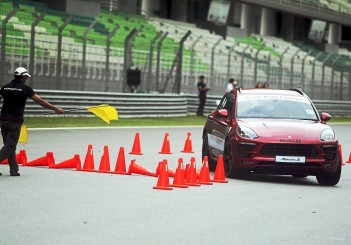 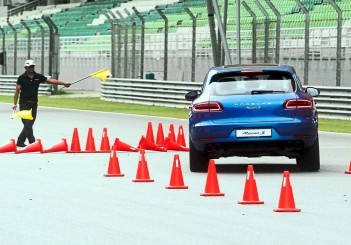 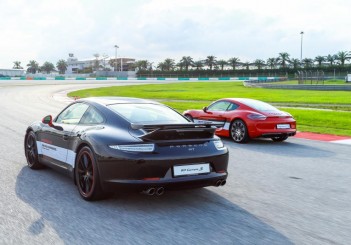 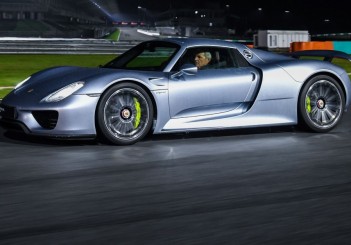 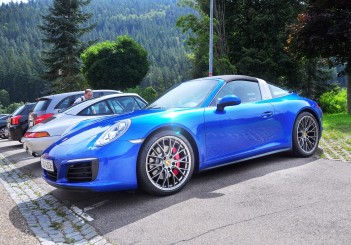 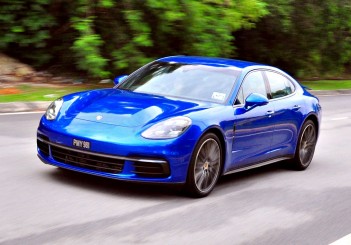