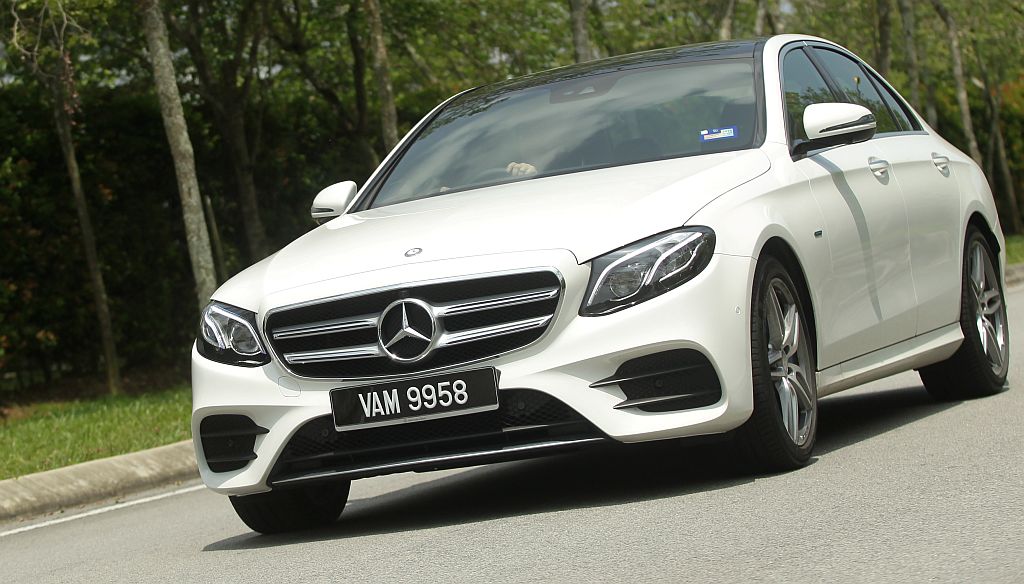 Driving a plug-in hybrid electric vehicle (PHEV) is not much different from driving a conventional engine-only car. The basics are the same. Start it up, get in gear, and off you go. But one has to get accustomed to a few things about PHEVs.

You will visit the petrol station less often provided you don't have a heavy right foot by default. That's the delightful part. The tedious part is having to deal with a long power cord if you want to charge up the Li-ion battery. 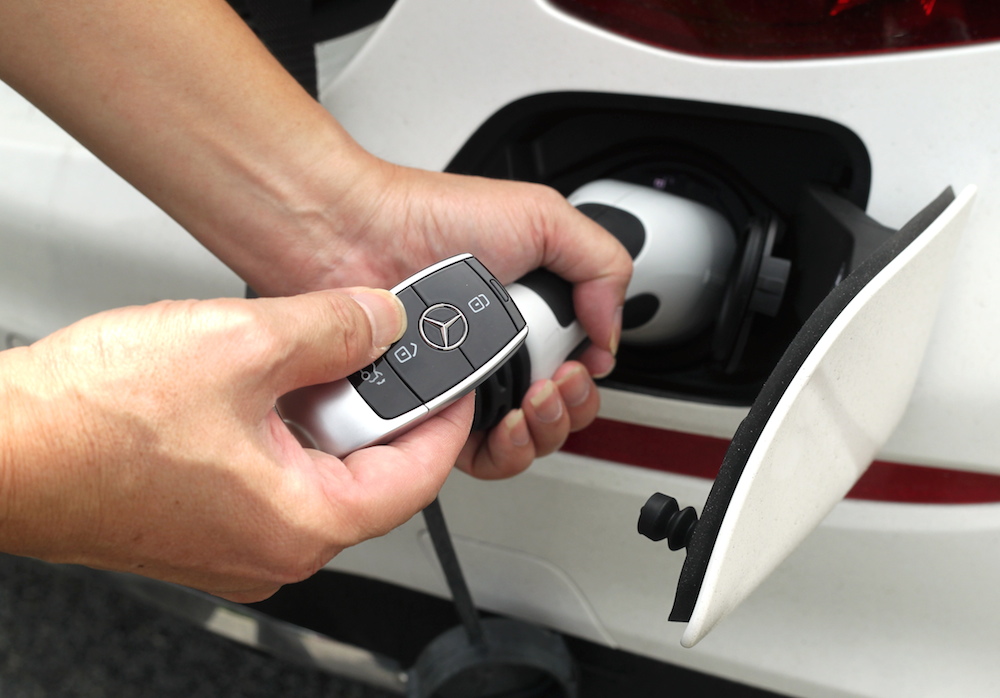 You don't ever have to, of course, as the car can do it on the go with the engine charging it but at the expense of using more fuel. We reckoned some owners will not bother using the cable or use it sparingly because it’s simply one task too many for them.

Patience is also required when topping up a PHEV to full charge. Using the portable charger supplied, it will take around three hours to bring the battery from minimal to full charge. With PHEVs, the ideal situation is to charge them up at home overnight to keep running costs down, so the battery is fully juiced up for the next day. The battery is also charged during regenerative braking. 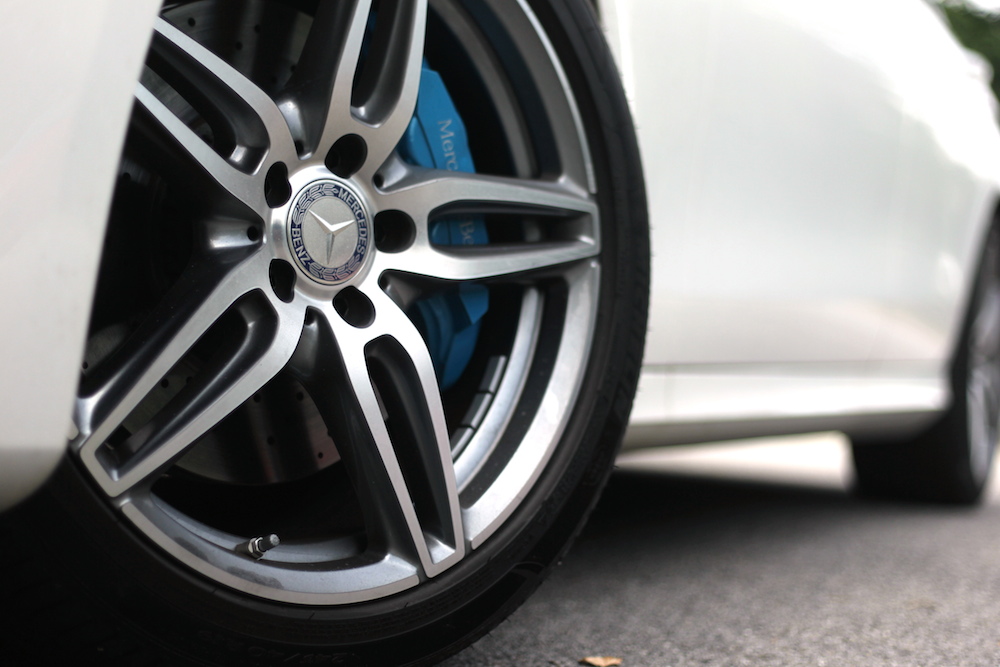 With a plug-in car, the whole point is to charge it from an external power source to get the most out of it. If not, kiss the 2.1l/100km fuel efficiency goodbye!

On top of such considerations, you will have to buy a different type of cable (the so-called Type-2 cable will run a few thousand ringgit) if you want to use the free public chargers in the Klang Valley. Until wireless charging become mainstream, feet-tripping cables are the way to go for the next few years.

If you manage your expectations - cost of car notwithstanding – the next PHEV to hit the local scene could be up your alley.

CarSifu had first crack at the Mercedes-Benz E 350 e over an August weekend. This is the first PHEV in the E-Class after the Malaysian rollout of the C 350 e, with Mercedes promising many more across its product line.

The E 350 e will replace the E 300 as the top variant in the model range once it's launched soon. It's common knowledge that Mercedes-Benz  wants to price it at under RM400,000, as it will be locally assembled compared to the RM459,000 fully imported E 300. 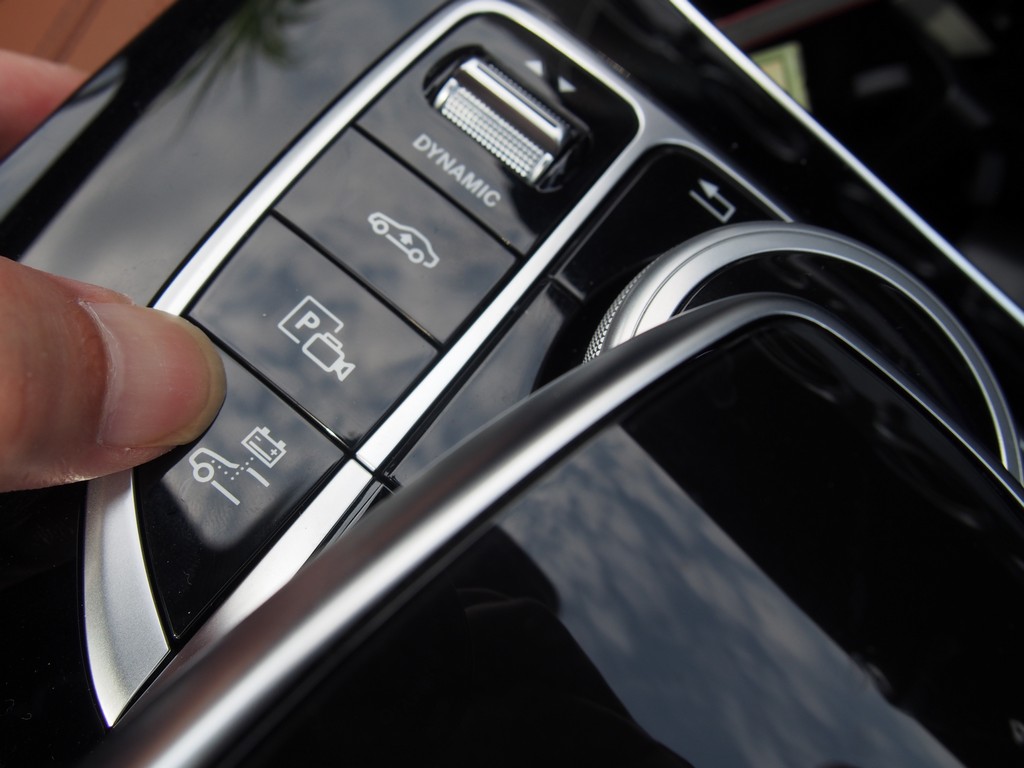 Press this button to toggle through the various hybrid operating modes. 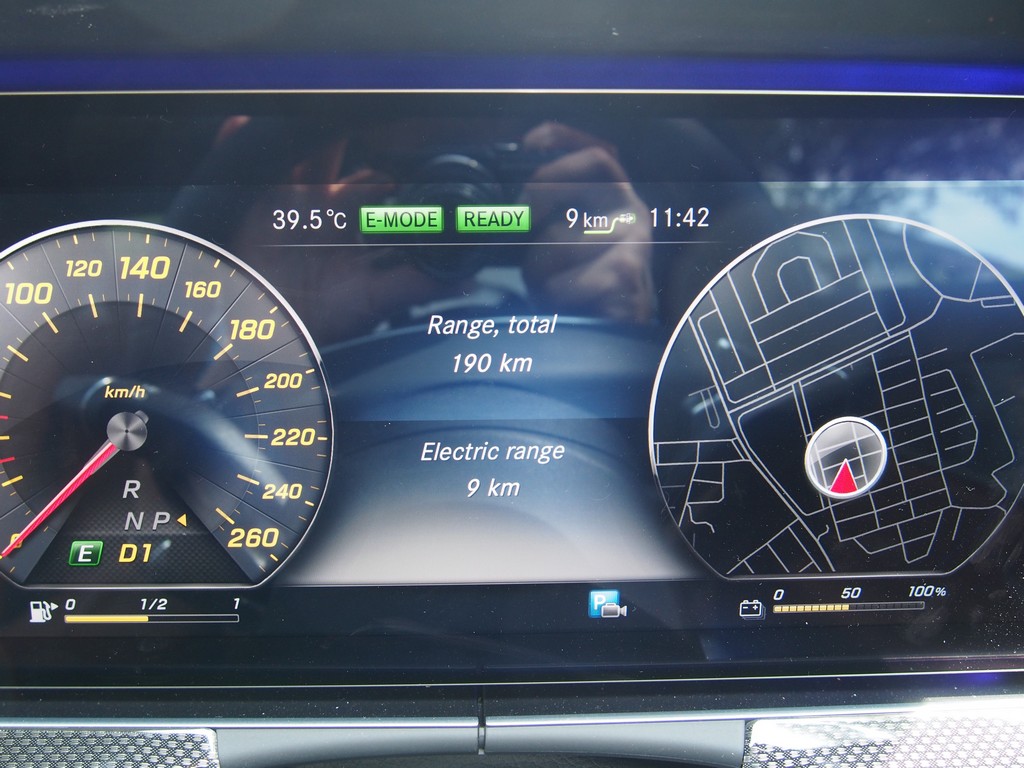 As a thoroughly modern E-Class, the E 350 e conforms to the model range mission to broaden its appeal and draw in a youngish crowd with its youthful styling, made sportier with AMG kit.

A prominent grille, short overhangs, a long bonnet, and a coupe-like rear are ingredients to inject a sporty flair in an executive car we have grown familiar with through an earlier review of the E 250. 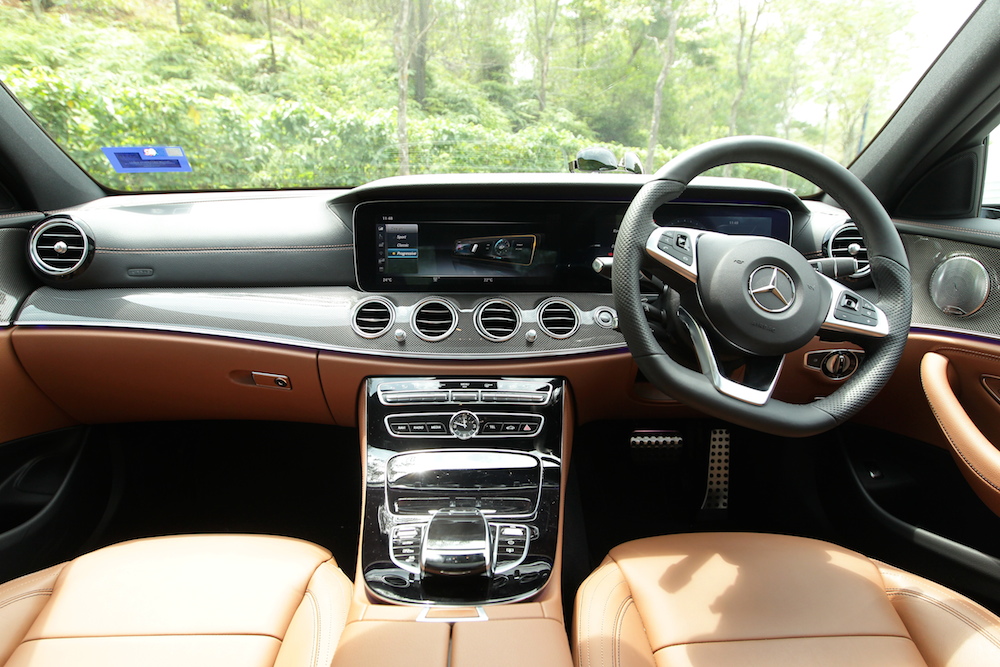 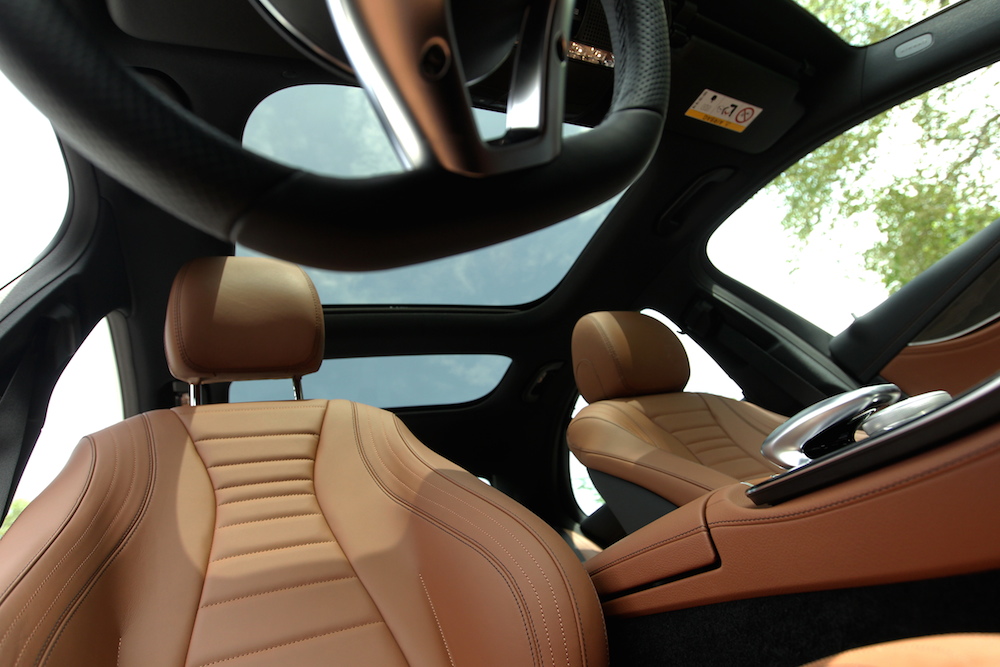 The E 350 e doesn’t so much shout its hybrid status as hint it through small side emblems, a rear bumper charging port and blue front callipers.

The well-appointed interior is a mix of black and brown nappa leather upholstery, carbon-fibre-like inserts and plenty of soft touchpoints to infuse the cabin with an ambience of luxurious comfort. There’s the dual 12.3-inch widescreen digital screens as seen in the E 250 and a choice of meter displays – Classic, Sport or Progressive – to choose from. In the E 350 e, the meter cluster has been tweaked to show hybrid-specific info such as electric range and hybrid operating modes.

Adequate headroom and legroom make the rear bench seats comfortable for two; the middle passenger will have to compromise on comfort as he straddles the transmission tunnel in the rear-wheel drive car. 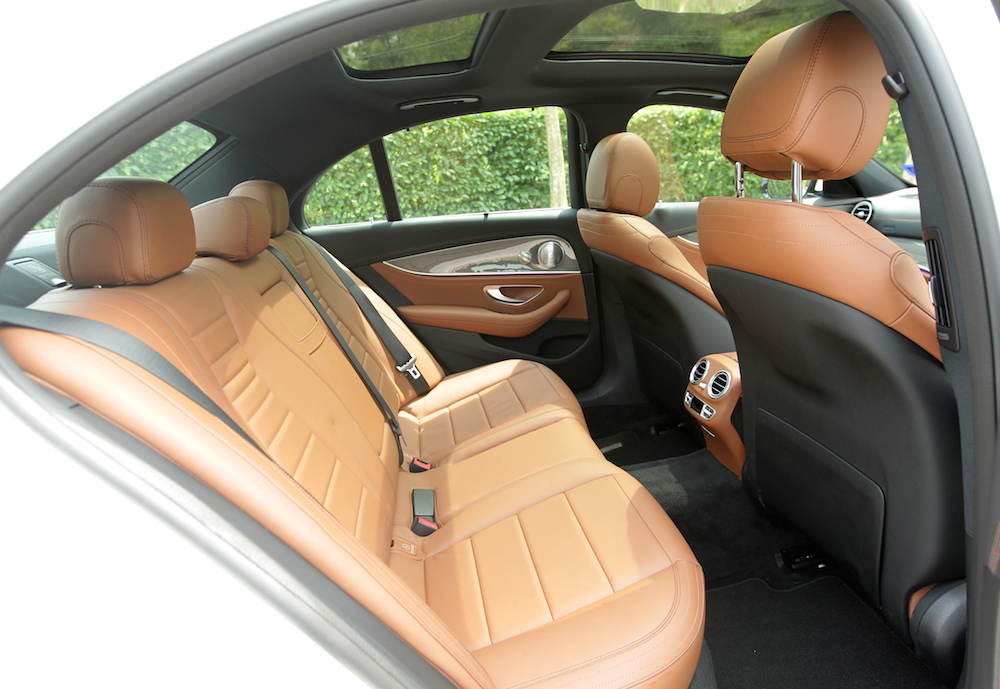 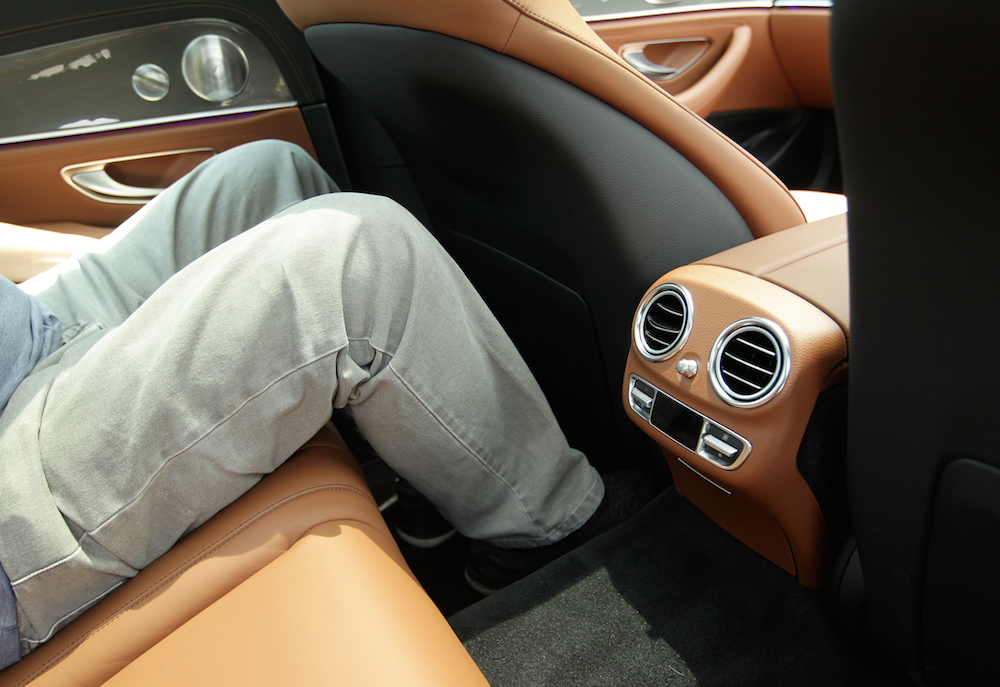 Meanwhile, it’s all good upfront as sports seats with side bolsters help to keep driver and front passenger firmly in place during frisky turns.

At night, an ambient glow makes the interior more attractive, and you can switch between various colours. 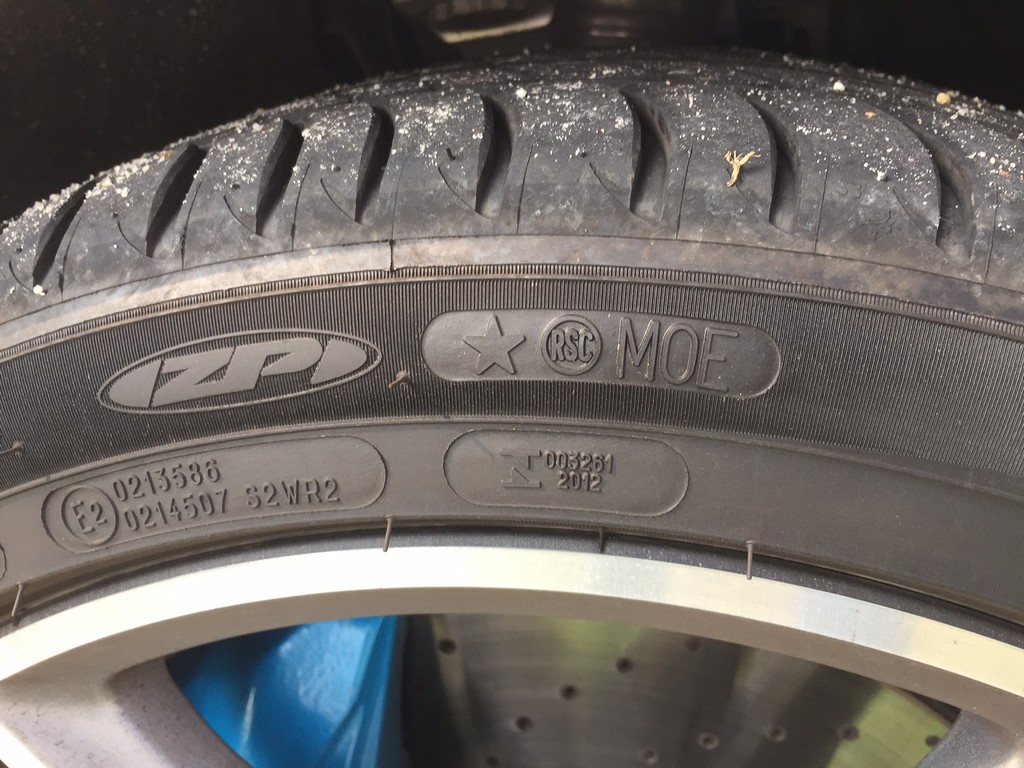 The E 350 e doesn’t have a spare tyre onboard as it rides on Michelin MOExtended tyres that offer temporary extended mobility. They are not run-flat tyres per se but allow the car to travel 30km to 80km at up to 80kph after a puncture.

Not that a luxury car is ever going to see towing duty but it's good to know that the E 350 e is the first hybrid from Mercedes-Benz with a high trailer towing capacity of up to 2,100kg.

Charging the car at PJ’s Paradigm mall via the normal 3-pin plug of the portable charger, we managed to get the battery level up to 90% from 50% in 1 hour. Full charge from depleted state, as mentioned earlier, would be around 3 hours. 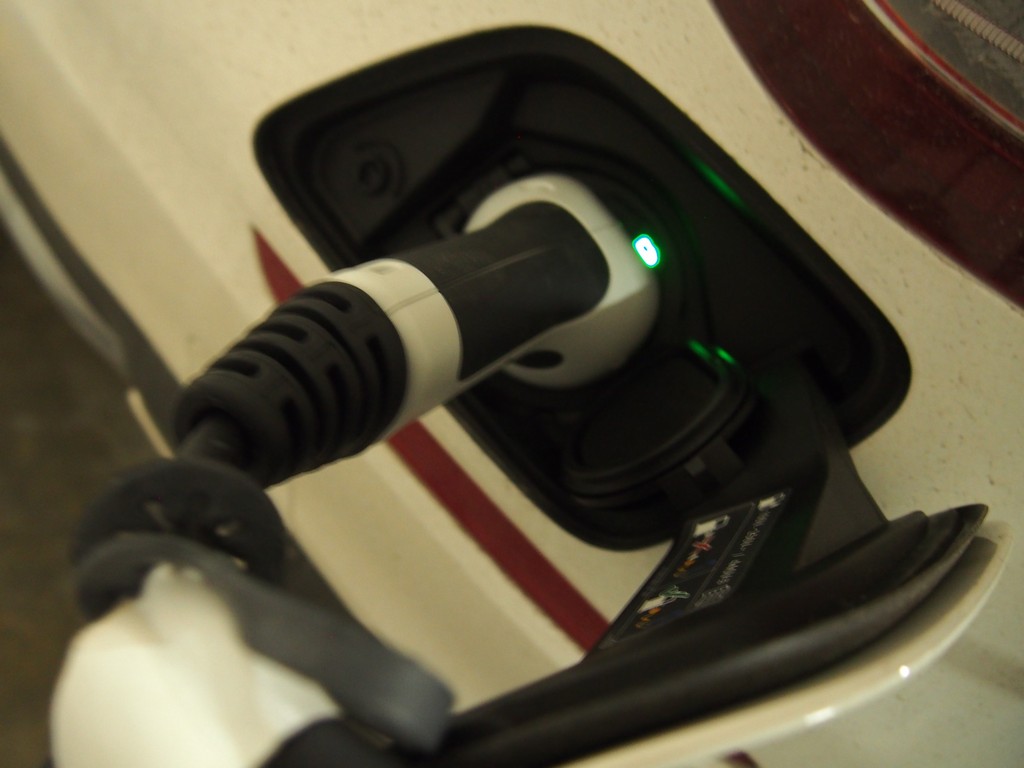 The mall, like a number of other commercial premises and selected Petronas stations, have a few Greentech ChargEV chargers installed but we were not supplied the charger-specific cables to see if full top-up from the 3.7kW charger could be achieved in half the time of the portable charging cable. The Klang Valley hosts some 22kW fast chargers that would reduce the wait time even more.

Both the turbocharged 2.0-litre engine and 6.2kWh battery are the same as those used in the C 350 e but the E 350 e gets a more powerful electric motor that has been specially designed for the 9-speed plug-in hybrid transmission. 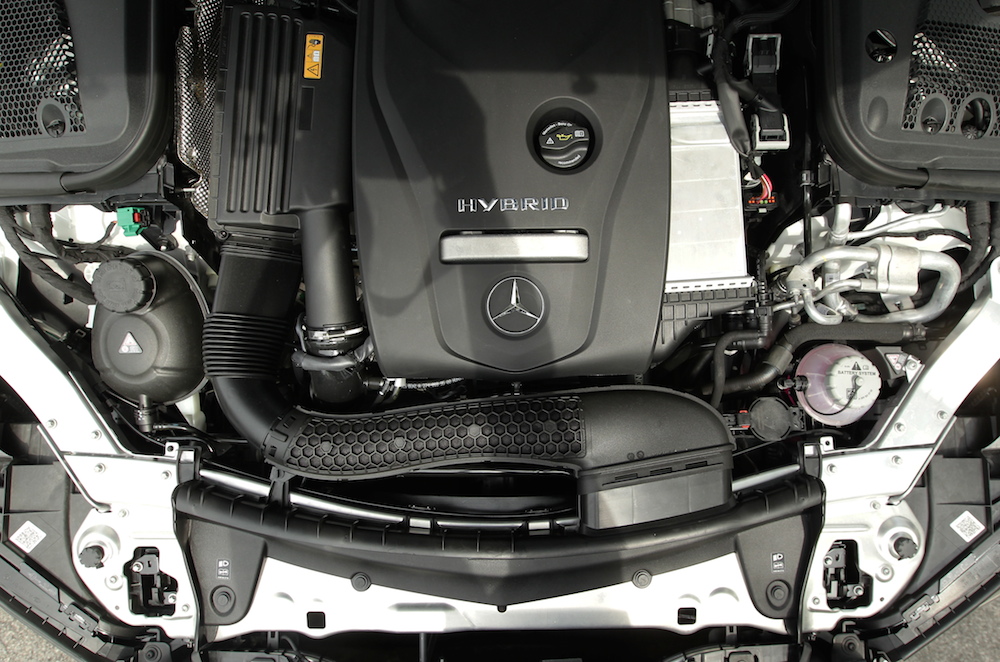 The old road from Rawang town to Kuala Selangor afforded a good gauge of the E 350 e's driving manners, with some long stretches to drive it fast and plenty of bends and potholes to assess its handling. The occasional monkeys scavenging for food by the road liven up the route further by helping us to brake-test the car. 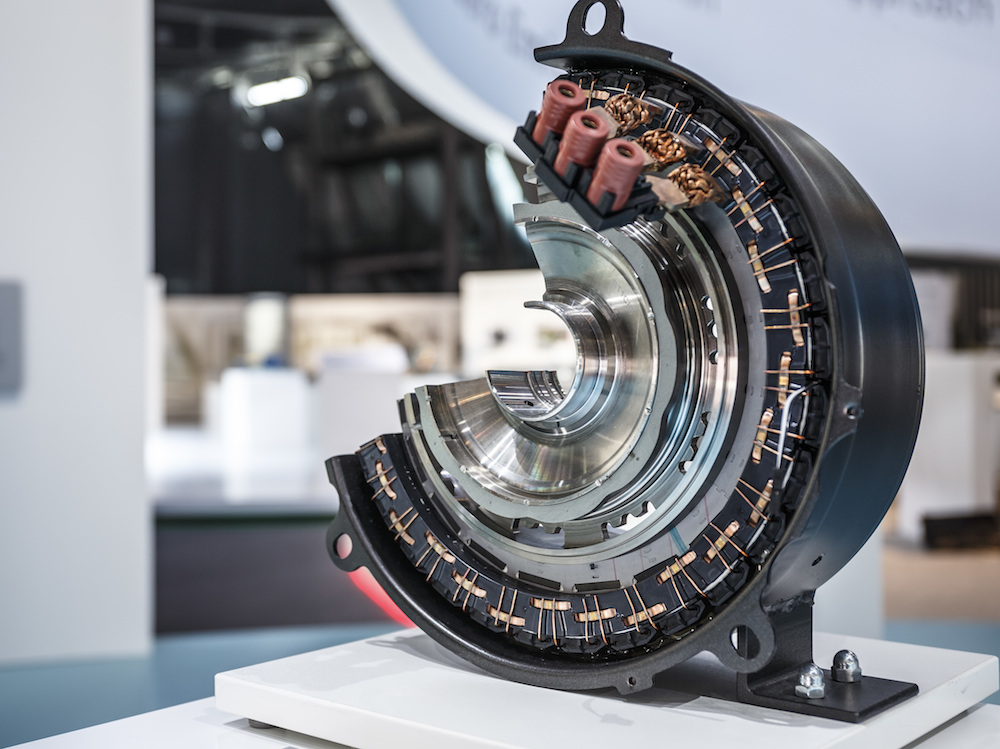 The instant torque of the electric motor, paired with a high-revving engine, makes the E 350 e feel agile.

If the battery has sufficient charge, the car will start in electric mode and goes fast – quietly. The initial feeling is surreal but you quickly get into it after a few hours with the car. Mercedes-Benz claims it can run on electricity for 33km at a top speed of 130kph but it’s more like 20-plus km in real world conditions.

Once the battery is low on power, the engine quickly takes over, noticeable by the rather diesel-like note it transmits into the cabin. However, the noise fades rapidly once the car musters up speed. 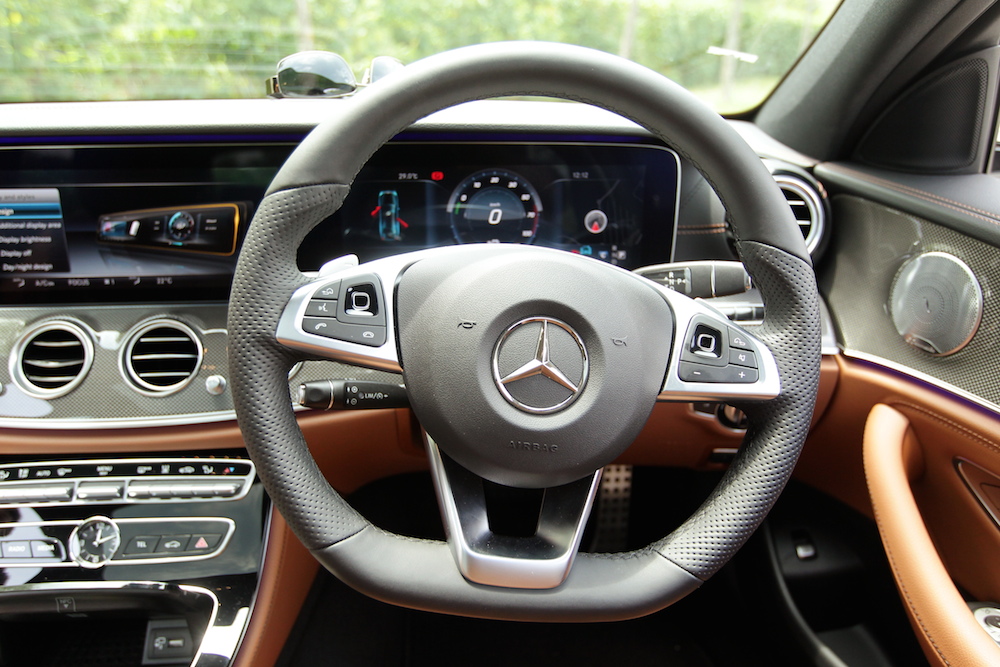 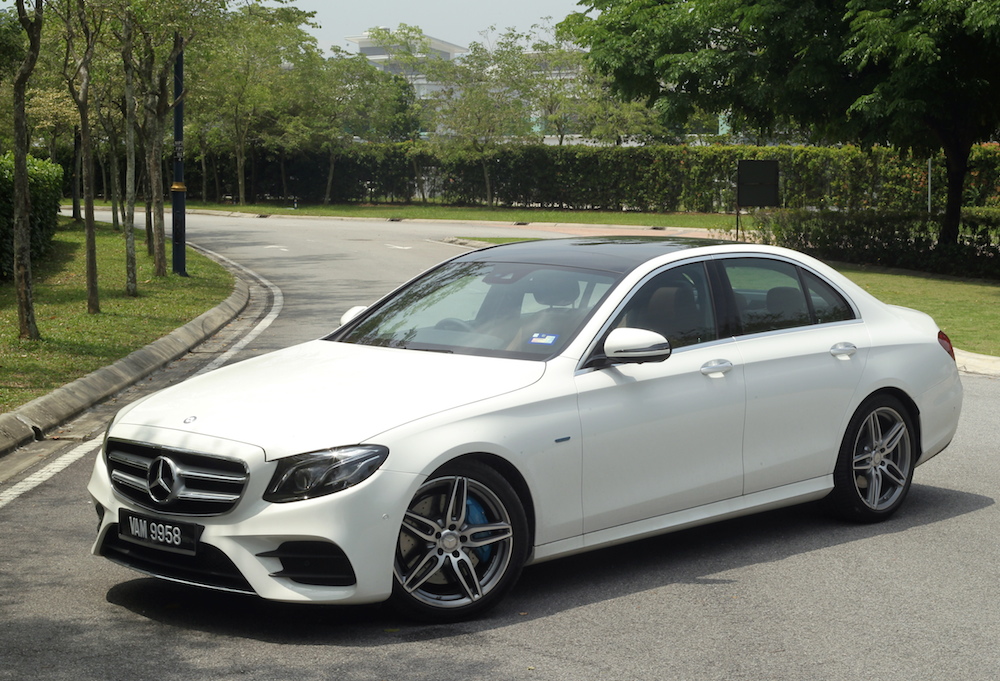 In day-to-day driving, the E 350 e offers the characteristic comfort and refinements expected of an E-Class. Corners are where it starts to roll noticeably but it’s reined in when you set the air suspension in Sport or Sport+ mode for a more controlled entry and exit out of the twisties. While visually appealing, the big wheels do relay some of the jarring effects of going over sizeable potholes.

The driver can toggle through four operating modes in the hybrid system except in Sport setting. The default hybrid mode turns on all hybrid functions, such as electric mode, boost and recuperation and are deployed for optimum fuel efficiency. 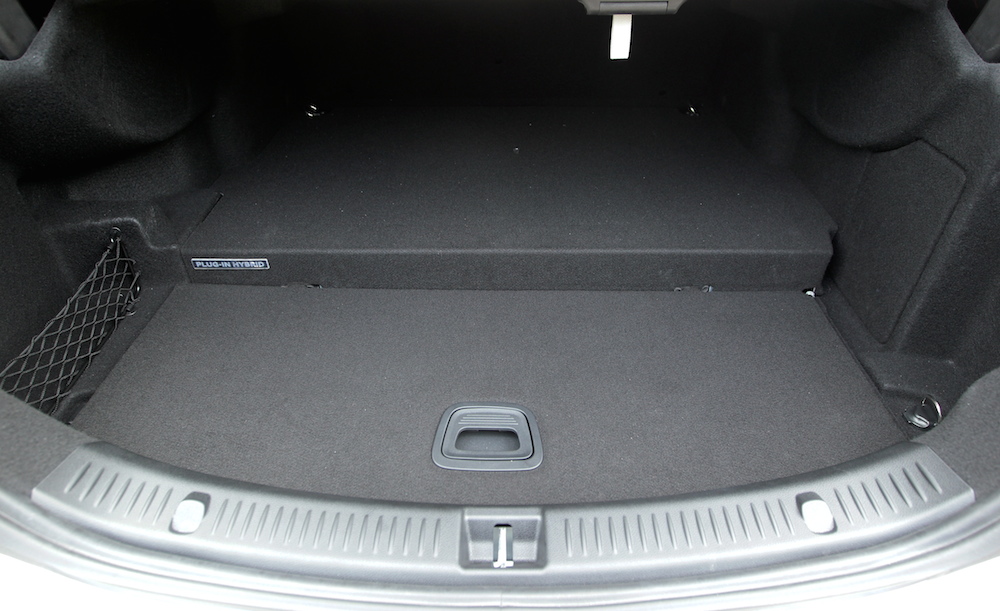 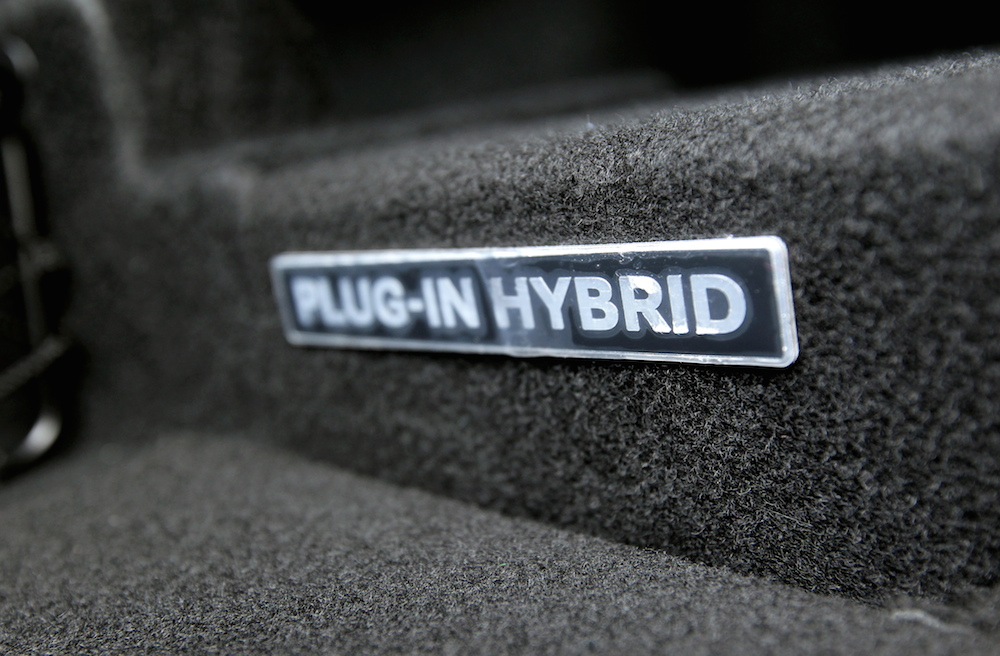 E-save tells the hybrid system to maintain the charge status of the battery to allow for all-electric driving at a later stage in the journey.

As the name implies, Charge instructs the engine to charge the battery while on the move, to enable all-electric driving later.

E-mode is where the car is set up for all-electric driving for instances where the battery holds sufficient charge for the remainder of the journey. It’s also appreciated in traffic jams; you will love the fact that you are not wasting fuel like the rest around you and doing your bit for the environment. 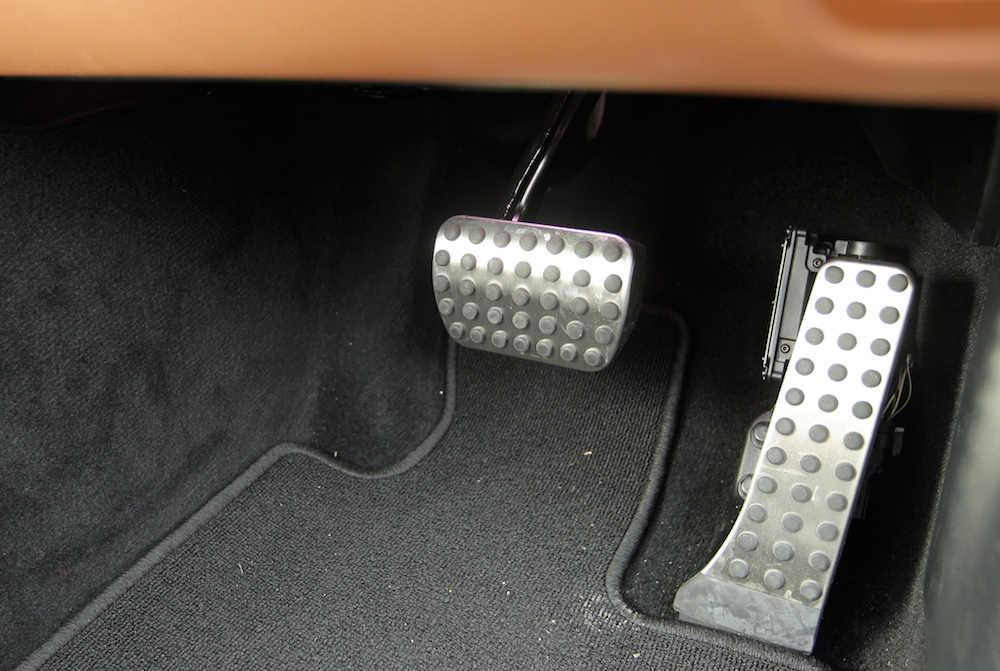 The accelerator pedal even offers haptic feedback via rapid pulsation as a way to further help the driver drive economically.

The other nice part of this PHEV? It alerts and guides you to the nearest petrol pump on the sat-nav once the tank is low on fuel.

All said and done, the E 350 e looks like a great commuter car for those working in KL/PJ but staying on the outskirts. Doing 60km to 150km a day with some of it pollution-free driving does sound eminently pleasing.

Even the city-bound will not be averse to coveting a car that has the hallmarks of a Mercedes and is technologically innovative for the times. 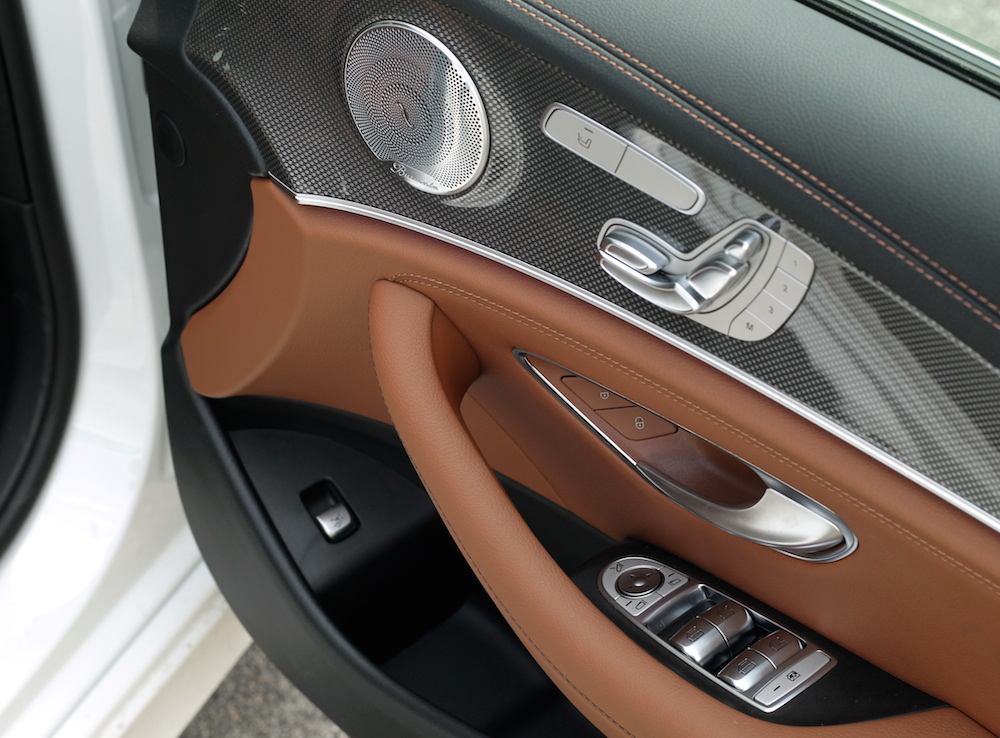 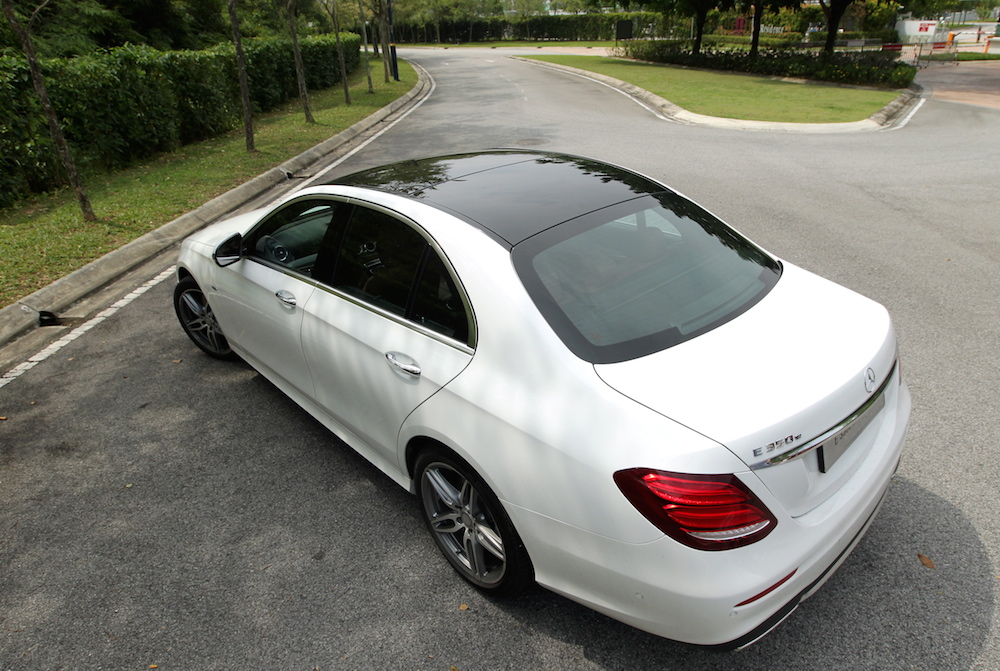 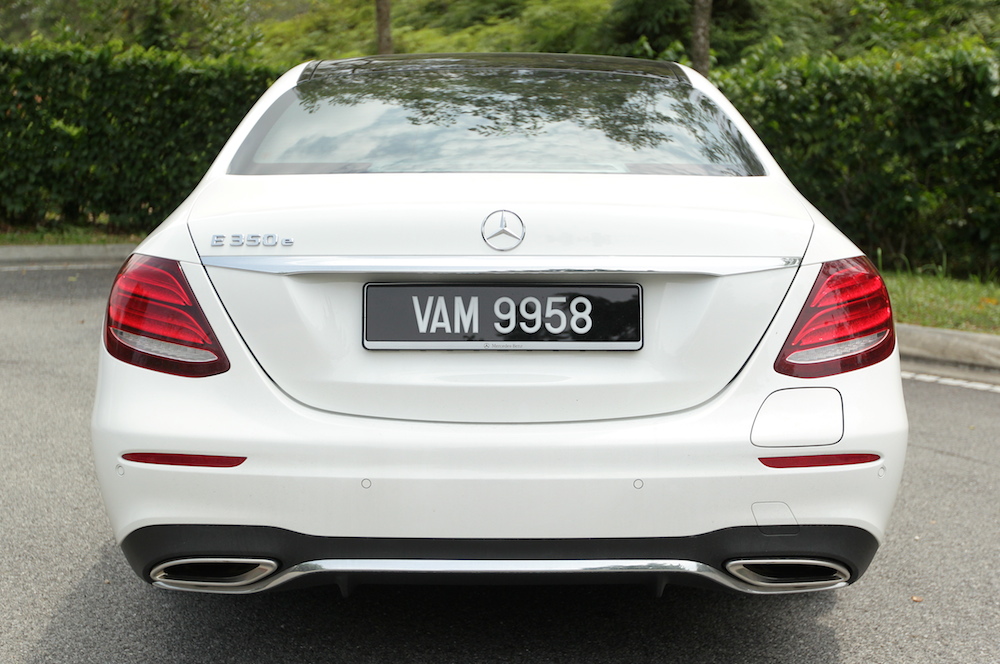 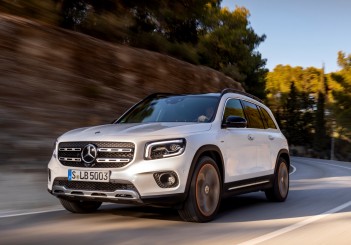