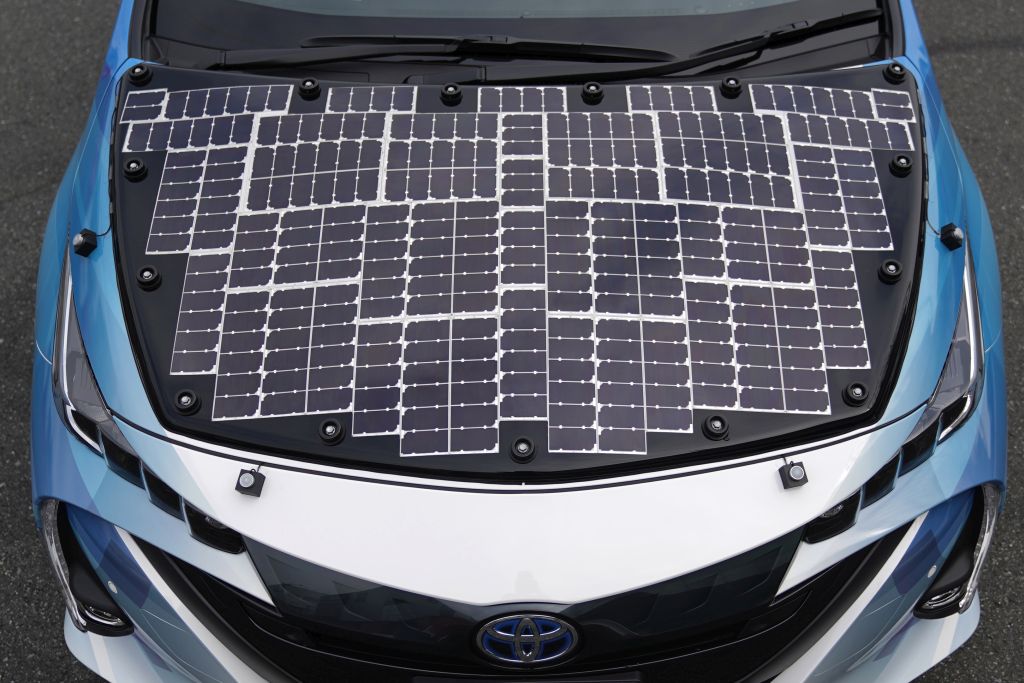 Solar panels affixed to the bonnet of a Prius PHEV equipped with a solar charging system in Tokyo Japan, on Sept 11. — All pix by Bloomberg

TOKYO: Put together the best solar panels money can buy, super-efficient batteries and decades of car-making know-how and, theoretically, a vehicle might run forever.

That’s the audacious motivation behind a project by Toyota, Sharp Corp. and New Energy and Industrial Technology Development Organisation of Japan, or Nedo, to test a Prius that could revolutionise transportation.

"The solar car’s advantage is that - while it can’t drive for a long range - it’s really independent of charging facilities,” said Toyota project manager Koji Makino.

Even if fully electric cars overtake petroleum-powered vehicles in sales, they still need to be plugged in, which means building a network of charging stations across the globe.

The sun, on the other hand, shines everywhere for free, and when that energy is paired with enough battery capacity to propel automobiles at night, solar-powered cars could leapfrog all the new-energy technologies being developed, from plug-in hybrids to hydrogen fuel-cell vehicles, in one fell swoop. 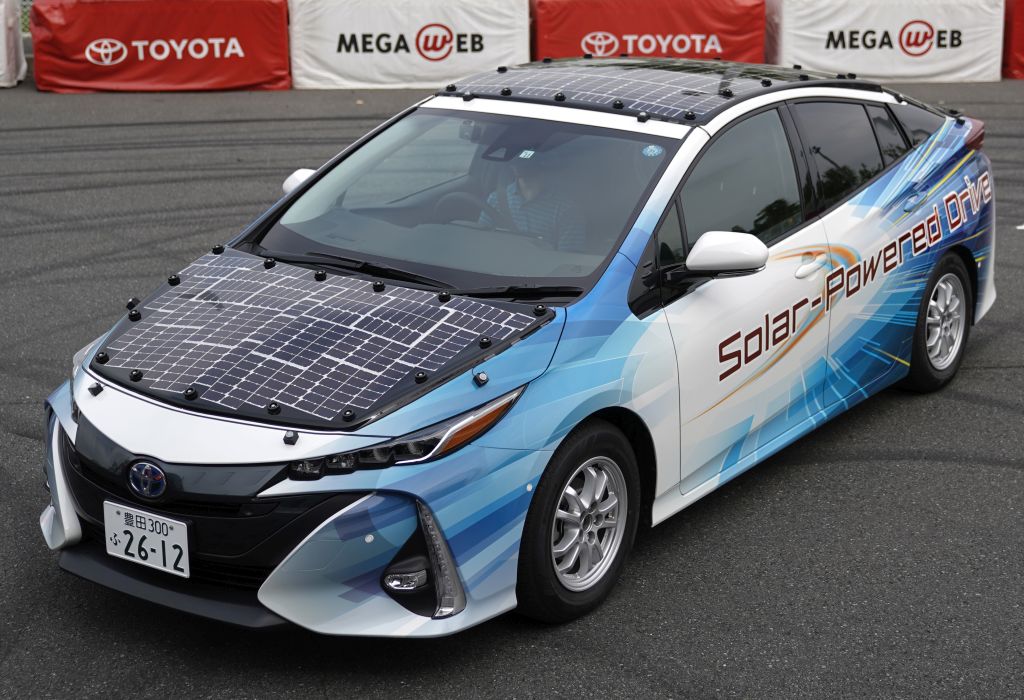 But the current forecast is only partly sunny because there’s still some work left to reach that level of efficiency.

"This is not a technology we are going to see widely used in the next decades,” said Takeshi Miyao, an auto analyst at consultancy Carnorama. "It’s going to take a long time.”

Not for lack of trying. Toyota and Hyundai Motor Co. already introduced commercial models with solar panels on the roof, but they were too underpowered and could barely juice the sound system.

A Prius plug-in hybrid that sells for more than 3 million yen (RM116,000) offers solar panels as an option, but they only charge the battery when parked. The maximum amount of power for driving only lasts about 6km, said Mitsuhiro Yamazaki, director at the solar energy systems division of Nedo.

Toyota has been testing a new solar-powered Prius since July, though it acknowledges that cars running non-stop without connecting to a hose or plug are still far away. Even so, the Toyota City-based company said the research will pay off in other ways.

Indeed, there have been some breakthroughs, mainly due to advancements by Sharp. The prototype’s solar panel converts sunlight at an efficiency level of more than 34%, compared with about 20% for current panels on the market.

Because the solar cell being used by Toyota, Sharp and Nedo is only about 0.03 mm thick, it can be placed on more surfaces, including the curvy parts of the roof, bonnet and hatchback. The electrical system can charge the vehicle even when it’s on the move.

If the car is driven four days a week for a maximum of 50km a day, there’s no need to plug into an outlet, said Nedo's Yamazaki.

Toyota’s bet on solar is one of many that Japan’s No. 1 carmaker is placing on the future of transportation. With Volkswagen AG and other auto titans facing uncertain futures as new technologies and business models ripple through the US$2.23 trillion (RM9.3tril) global industry, they’re investing billions of dollars in cars powered by electricity and hydrogen to keep apace. 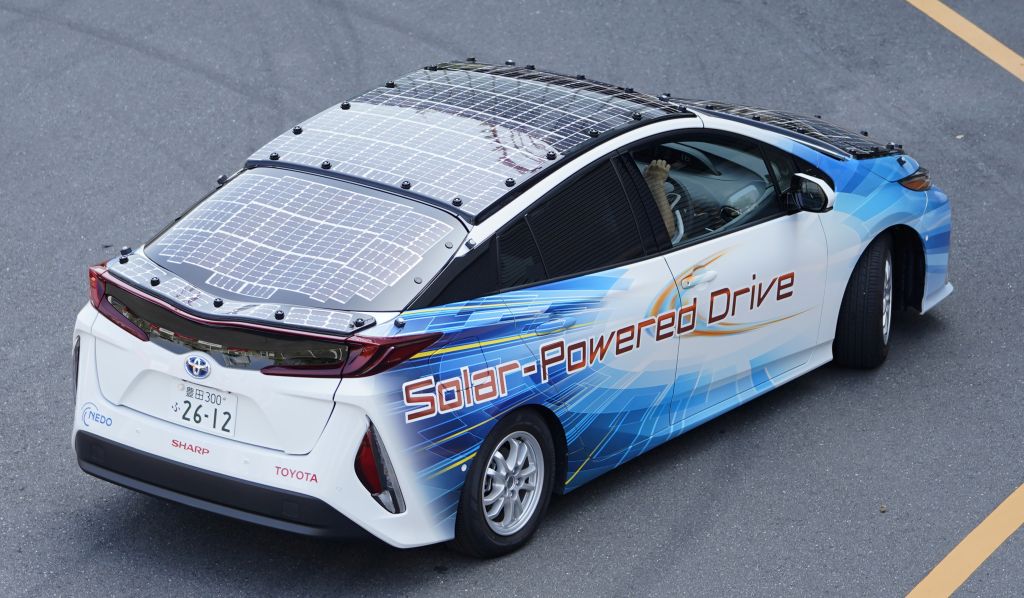 Hanergy Holding Group Ltd. introduced four cars powered by solar panels in 2016 as a way to expand the use of photovoltaic technology. The cars could be charged in daylight while driving, but they also contained lithium batteries for plugging in.

Nedo started the current project in 2016 with the goal of achieving an output of 1 kilowatt in vehicles by using a solar-battery module with a conversion efficiency of more than 30%.

Sharp, one of Japan’s largest makers of solar panels, is developing the solar-cell technologies with Nedo funding, while Toyota is responsible for making the system to convert energy into driving power.

While the car’s greatest potential markets will be sunny climes, such as California and western China, Nedo will evaluate whether it’s also suitable for cities such as Tokyo, a key assessment for deciding whether to mass produce the vehicle, Makino said. The current trial is scheduled to run through March.

If the solar-powered Prius can be made, it could compete with established manufacturers such as Hyundai and startups Karma Automotive and Lightyear. The Lightyear One is a US$170,000 (RM708,000) luxury electric car that, according to its developers, can drive almost 800km on a single charge.

The startup, founded in 2016 by a group of Dutch engineering students, uses 54 square feet of solar panels on the roof and bonnet that add more than 11km each hour to the car’s driving range.

Production is planned to start in 2021, and more than 100 cars have been pre-ordered, said the company.

Sharp’s solar cells more commonly are used for charging homes and satellites. Toyota’s demo car is covered by about 1,100 cells, each about the size of a business card, said Hiroyuki Juso, a senior manager at Sharp’s solar panel project. The expense of the cells makes mass production unlikely for now, he said.

"There is potential in this technology,” said Carnorama’s Miyao.