All nine cars given away at Honda campaign's grand finale KUALA LUMPUR: Honda Malaysia celebrated its 900,000th sales unit achievement with a fun-filled, two-day extravaganza, that was opened to the public.

One of the key highlights of the day was the handover ceremony of the nine Honda models to the winners. In the run-up to the grand finale on Saturday and today, Honda Malaysia had already announced the first two winners of the giveaway who won a Civic and HR-V.

The winners of the remaining seven Honda models were announced at the “Road to 900,000th Unit Milestone Campaign” grand finale.

Over 122,000 participations had been received in the two months since the campaign was held. However, the Honda press statement did not disclose what model the 900,000th unit was and to whom it was sold to. CarSifu has reached out to Honda for an answer.

The public also had a chance to get a first glimpse of the facelifted Civic at the weekend event. The new Civic is due for local launch in the final quarter of 2019 and booking is now open.

"We are very happy to reach such a significant milestone of 900,000th sales unit since our establishment in 2002 and we want to celebrate it with all Malaysians,” said Honda Malaysia managing director and chief executive officer Toichi Ishiyama.

“This campaign is made extra special as it is the first time Honda Malaysia collaborated with popular homegrown brands - Astro Radio, Tealive and unifi – to give away the nine cars." Ee Shi Lin gets a Jazz. With her are (from left) Ishiyama and Loob Holding Sdn Bhd CEO Bryan Loo.

Honda Malaysia rolled out the first Completely Knock-Down (CKD) model, the CR-V in 2003. The CKD models have contributed the most to Honda Malaysia’s total sales by 95% and 5% is from Completely Built-Up (CBU) models.

Overall, the City contributed the highest at 37%, followed by Civic at 15% and CR-V at 11% since the company’s establishment.

At present, Honda Malaysia assembles 10 models namely Jazz, Jazz Hybrid, City, City Hybrid, Civic, BR-V, HR-V, HR-V Hybrid, CR-V and Accord. The top three selling models for this year up to August are the City with 33%, followed by the HR-V and CR-V with 18% and 14% contribution respectively. 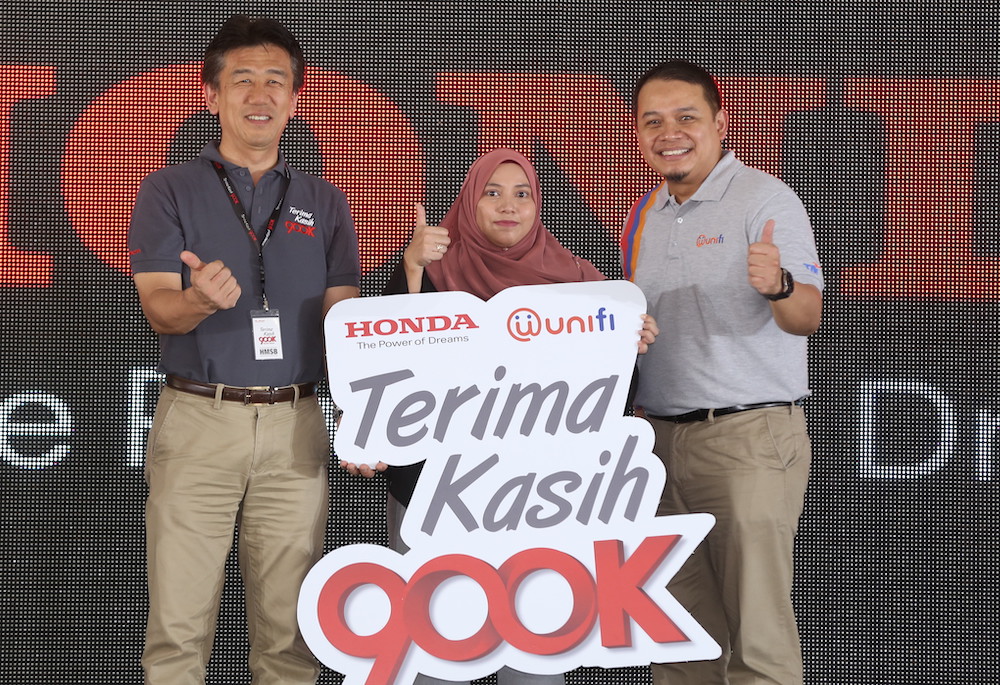 Nik Siti Nurhidayah Juhan adds the HR-V Hybrid to her household. Posing with her are Ishiyama and Unifi executive Azmi Abdullah.

At the grand finale, fun activities were also organised for adults and children such as a 380 feet-long Giant Water Slide for thrill seekers, picturesque Insta-Luminous displays, immersive Virtual Reality (VR) Games and a mini food fair.