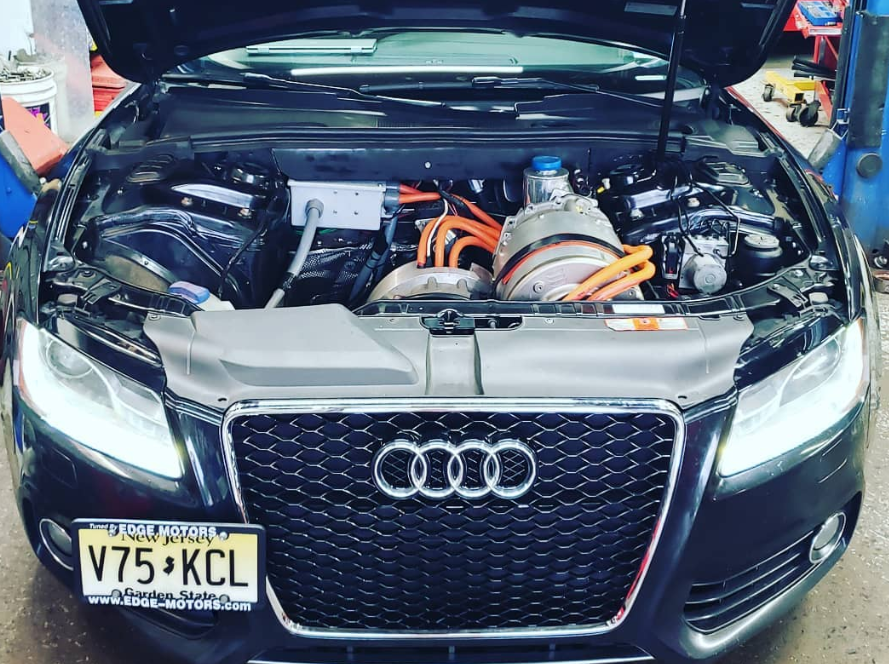 One big difference is that it no longer has a regular 4.2l V8 engine. Under the bonnet is an all-electric powertrain. It's what Polyak, a mechanic, claims is the world's first fully-electric Audi using Tesla motors taken from a Model S.

In this 14-min clip posted up by Euro-parts reseller Deustche Auto Parts last month, Polyak recounts the fascinating journey to convert the internal combustion engined-S5 into an electric car.

Polyak swapped the drivetrain from a P85D Model S into an Audi S5, while keeping the quattro drive intact. He has been converting old gas guzzlers into electric vehicles since 2013 and that included a Mazda MX3 from the 90s.

The conversion of the S5 took six months to complete.

In an interview with Deustche Auto Parts, Polyak of Bergen County, New Jersey, spoke of the instant torque and the low maintenance as some key benefits in turning the S5 into an electric sports car. In the last year, the simplicity of the powertrain meant there was no need for maintenance, he said, adding that he only rotated the tyres in that time.

Polyak bought the high mileage S5 from a used car dealer and found a wrecked Model S with dual motors as the source for the electric car conversion, which was done with the help of Edge Motors in nearby New Jersey.

For the S5, he had to toss out the Audi's non-touchscreen 7-inch infotainment display for a 10-inch touchscreen that features a modern interface.

The rear seats were removed to store the Li-ion battery stack, which extended into the boot space. A cooling manifold helped keep the battery from overheating. In contrast, the batteries in the Model S is located in the floor of the car.

Polyak also installed a custom Engine Control Unit or ECU to replace the Tesla's Main Computer Unit (MCU) as the electric motors would not work outside the Model S or Model X.

"The motor is looking for information from the MCU (to work) so basically we recreated that with our ECU. By sending it the same info it's looking for, it thinks everything is OK. From there, we integrate it into the Audi CAN bus system so the Audi knows what's going on."

Polyak runs a company called PolyKup that turns cars with engines into electric cars. Among parts he sells is a proprietary MCU.