MUNICH: The BMW Concept i4 is a pure-electric four-door gran coupe and represents a look ahead to the BMW i4, slated to enter production in 2021 as the BMW Group’s first all-electric model in the premium midsize class.

Film composer Hans Zimmer provided the soundtrack to the world premiere in Geneva.

The electric motor developed for the BMW i4 generates maximum output of up to 390 kW/530 hp, which ranks it alongside a current BMW V8 combustion engine.

The fifth generation of BMW eDrive also brings a newly designed high-voltage battery which weighs roughly 550kg, has an energy content of around 80 kWh and achieves an operating range of up to 600 km (373 miles) in the WLTP cycle.

“The design is dynamic, clean and elegant. In short: a perfect BMW that happens to be zero emission.” Blue elements in the front end, flanks and rear end point to the car’s BMW i origins.

Series production of the new BMW i4 will begin in 2021 at the BMW Group’s main plant in Munich.

This means that, in the future, combustion-engined vehicles, plug-in hybrids and all-electric vehicles will be manufactured on the same assembly line in Munich. BMW 330e and xDrive variants expand 3 Series offerings in US 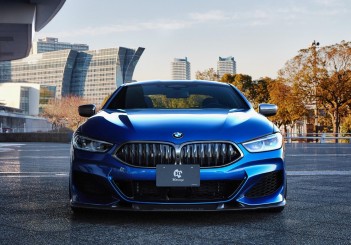