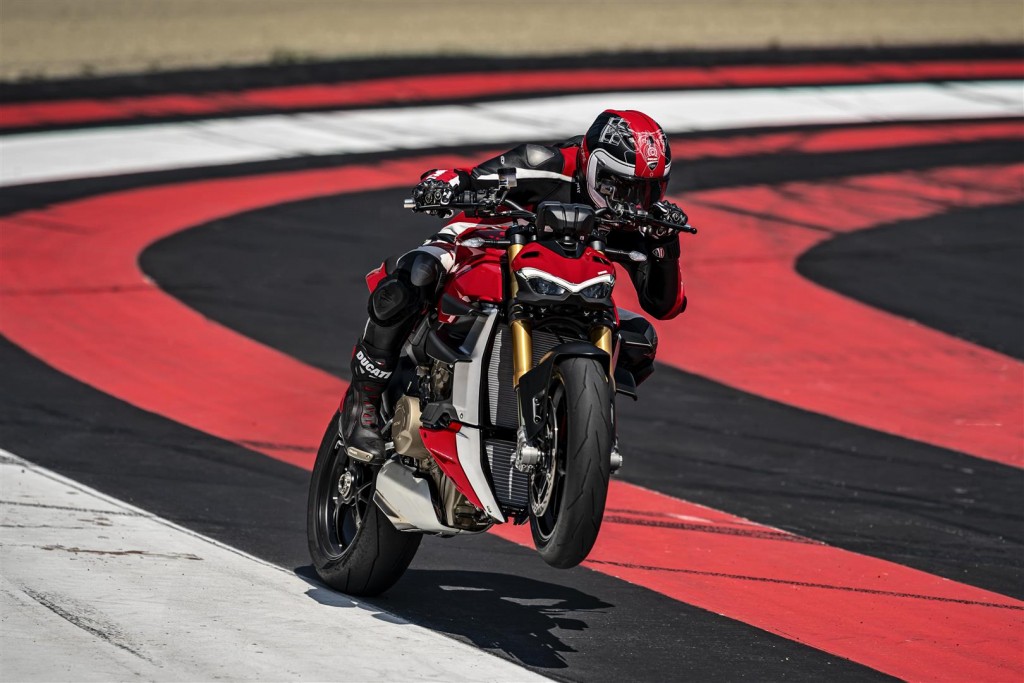 ROME: Ducati Motor Holdings has finally given its much anticipated Streetfighter V4 (SFV4) super-naked bike its official global unveiling via live stream amid the Covid-19 pandemic.

As standard the SFV4 comes slapped with a full-LED headlight - much like the Panigale V4, that takes after the grin of the comic-book character infamously known as The Joker.

The headlight - surmounted by a 5.0-inch TFT screen and flanked by biplane wings, looks embedded into the dual-layer fairing that incorporates the air-box and LED cooling intakes while a rear deflector helps to attract air away from impacting the fuel tank. The aerodynamics were developed using Computational Fluid Dynamics to optimally place the winglets in order to reduce front wheel lift and produce up to 28kg (20kg front, 8kg rear) of downforce at 270kph

This helps to improve stability during braking into corners before spitting out the other end.

Additionally, the winglets are said to help draw heat away from the 1100 Desmosedici Stradale engine while increasing water and oil radiator cooling rate by 2% and 10% respectively.

The SFV4 features the use of the company's MotoGP-derived front-Frame that weighs just 4kg and uses the engine as a load-bearing member by attaching itself to the upper crankcase of the front cylinder bank and the cylinder head of the rear bank. The crankcase is where the rear suspension attaches itself as a single-sided swingarm pivot mount.

Moreover, the struts alongside the engine have been shortened, making bike design more compact, especially in the rider's seat area.

Completing the chassis is the under-seat Trellis subframe, attached to the Front-Frame at the top and bolted to the head of the rear cylinder bank below.

The rear suspension linkage mechanism is attached to the engine via a forged aluminium bracket and reacts to movements imparted by a cast aluminium high-truss swingarm.

The steering geometry features a 24.5-degree rake and 100mm trail and as standard, 201kg (wet) SFV4 is suspended by a 43mm big piston Showa fork at the front and a Sachs shock at the rear while rolling on aluminium alloy wheels.

The engine, designed around the V4 MotoGP engine with the same 90-degree V4 engine configuration that's been rotated rearward by 42-degrees for an extremely compact setup that has a lower centre of gravity.

The 1,103cc engine produces 208hp at 12,750rpm and 123Nm of torque at 10,000rpm which drinks from a 16-litre aluminium tank and extends under the thicker more comfortable saddle to house all the electronics and battery. The gearbox is further equipped with Ducati's up/down quick shifter, a hydraulically controlled slipper and a self-servo wet multi-plate clutch to help send power to the chain-driven rear wheel.

Opting from the SFV4 S variant means power gets bumped up to 220hp (+12hp) and 130Nm (+7Nm) by fitting a 6kg-lighter full-racing Ducati Performance exhaust system designed by Akrapovič. The rear uses a fully adjustable Sachs shock absorber and is attached to the engine via a forged aluminium bracket.

The SFV4 S instead, makes use of Öhlins goodies that include the front NIX-30 fork and rear TTX36 rear shock absorber as well as an event-based steering damper - all of which are controlled by the second-generation Smart EC 2.0 system with a new Objective Based Tuning Interface system. Opting for the SFV4 S means the wheels get lightened to a three-spoke Marchesini forged aluminium alloys.

Braking comes from two front Brembo Stylema monobloc callipers - each with four 30mm pistons, a two-piston rear calliper that bites down on the dual 330mm (front) and 245mm (rear) discs.