Ford bets on electric Mustang to charge its turnaround DETROIT: The Mustang Mach-E electric sport utility vehicle Ford Motor Co unveiled in Los Angeles on Sunday is more than another car for the storied automaker.

The Mach-E has become within Ford a high-profile test for a restructuring that has been marred by profit warnings, costly quality problems and the troubled launch this year of another important vehicle, the Ford Explorer sport utility.

For chief executive Jim Hackett, the Mach E’s aggressive design and futuristic interior represent a long-awaited, visible sign of the overhaul of the company’s product creation process that he has tried to explain to sceptical Wall Street analysts for the past two years.

By accelerating the “clock speed” of vehicle development, cutting overlapping product architectures to just five from 13 and extending the company’s most successful brands to new products, Ford could slash US$20 billion out of a five-year, 2018-2023 product plan, said Hackett.

“This is the first thing we generated out of this new thinking,” Hackett said in an interview ahead of the Mach-E unveiling. “We have a lot more coming.”

For Ford chairman Bill Ford Jr., the Mustang Mach-E puts together two previously conflicting goals: His desire for Ford to be a leader in clean cars and make the automaker carbon-neutral by 2030, and his personal love of the Mustang and its growling V8 engine.

“We are really pushing our chips in on the table with this vehicle,” Ford said in an interview ahead of the Mach-E’s unveiling. The automaker has said it will spend US$11.5 billion developing electric and hybrid models by 2022.

The Mach-E started with humble ambitions. The SUV originally was to be what Ted Cannis, Ford’s global director for electrification, called a “compliance” play — an electric variant of a front-wheel drive internal combustion vehicle, aimed at generating emissions credits to comply with clean air regulations at low cost. There was no link to the Mustang’s muscle car image.

Boring electric cars were the norm for Ford and other legacy automakers. Then Tesla Inc in 2013 launched its Model S — an electric car that looked like a sporty European luxury sedan with a giant screen for a dashboard and entertainment and functional features that could be upgraded with over-the-air software updates.

Ford’s own customer research showed dull electric cars were a mistake, Cannis and other executives said.

Those doubts came to a head in mid-2017 when Hackett, then newly appointed, reviewed the design for the electric SUV with executive vice-president Jim Farley, who has owned seven of the cars starting with a 1965 model he restored when he was 14 years old.

“It’s not good enough,” Hackett recalled saying. Farley agreed, and Hackett said, “We tear it up.”

The team designing the vehicle started over, using a new architecture engineered from the start to be a battery electric vehicle, instead of the original plan to use a modified version of an internal combustion engine vehicle, Ford executives said. The Mustang muscle car’s distinctive “shark face” front end and body proportions were adapted to a new skin, and under the floor Ford designed a new battery pack that can deliver up to 483km of range in an “extended range” version.

The re-do had to be accomplished much faster than normal to stay on target for a fall 2020 launch.

“We were super behind time,” said exterior designer Chris Walter during a briefing on the vehicle ahead of the Los Angeles debut.

A concept for new dashboard software and a display using a 15.5-inch diagonal screen was pulled together in just 90 days by a 15-person group that called itself Team Menlo — a reference to Thomas Edison’s Menlo Park, New Jersey, laboratory. A paper prototype of the new screen used an empty Keurig coffee pod to represent a large control knob.

The overhaul cost money, but Ford product development chief Hau Thai-tang said the dedicated electric vehicle architecture should allow for 25% to 30% improvements in manufacturing efficiency to help offset the cost.

The final call on using the Mustang name came from the top, and was not given easily.

“I was dead set against it, initially,” Bill Ford said. Ford said he started to warm to the idea as he saw the styling and the performance data for the vehicle.

Ford said he did not grant his approval until earlier this year after driving a prototype.

“It felt like a Mustang experience to me,” he said.

This is not the first time a challenge to re-invent the Mustang has emboldened Ford employees to break with convention during a rough patch in the company’s history.

The original Mustang launched in 1964 was derived from a mainstream Falcon compact car, and quickly became a hit, far outselling the company’s projections. In the early 1990s, with the economy in a slump, a small group of Ford employees rebelled against a plan to transform the rear-wheel drive Mustang into a front-wheel drive car developed by Ford’s then-partner, Japanese automaker Mazda Motor Corp.

That project became a laboratory for cutting the costs of product engineering by putting representatives of different functions on the same team.

The Mach-E is another turning point, Hackett said. “The science project platform for EVs is now gone.” The Mustang Mach-E's available panoramic glass roof has a secret: a special coating on the glass with UV protection helps the interior stay cooler in the summer and warmer in the winter. 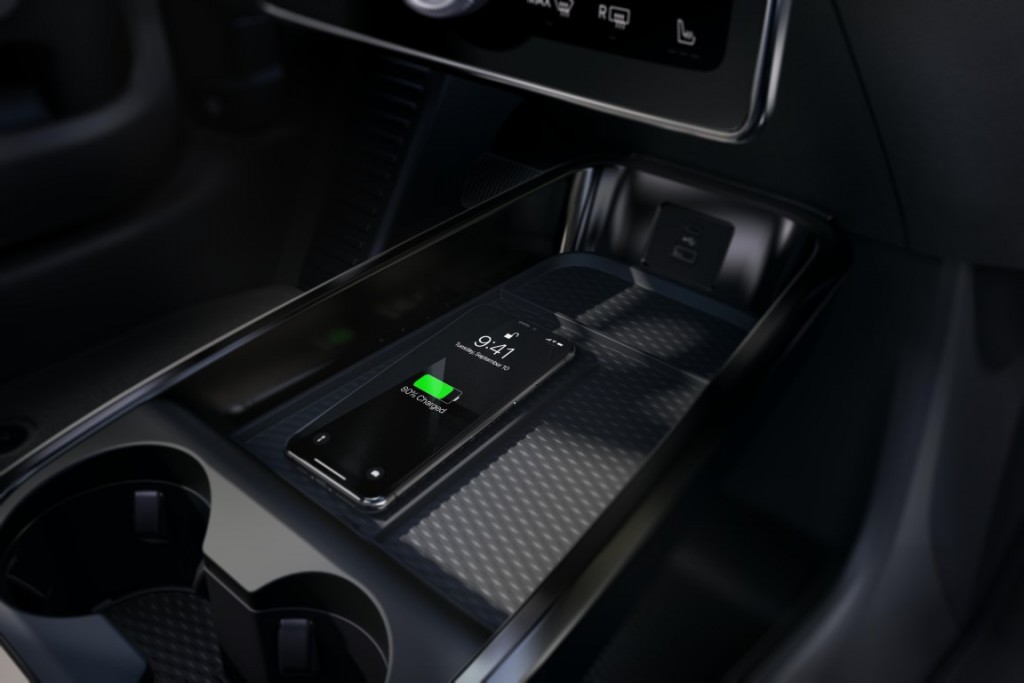 Inside Mustang Mach-E, a wireless charging pad makes it easier to cut the cord with compatible smartphones.