LONDON: The limits of the McLaren P1 GTR are currently being tested ahead of its official debut at the upcoming Geneva Motor Show in March.

Touted by McLaren as the most powerful and exclusive model to-date with a power-to-weight ratio of more than 700PS per tonne, the P1 GTR is being put through its paces in the closing months of its winter tests across Europe and the Middle East. Production of the P1 GTR is to start later this year, with the company’s bespoke Driver Programme also launching around the same time, the track-only model looks set to be one of the fastest to ever wear the famous McLaren ‘speed mark’.

The company says that its P1 GTR has undergone significant weight-saving measures and has been track optimised that’s allowed it to receive a 10% power-to-weight ratio improvement over the road-going model.

The P1 GTR is due to complete thousands of extreme kilometres from several UK and European locations, as well as in the extreme heat of Bahrain and Qatar, with chief test driver Chris Goodwin at the wheel. These tests help to ensure that the P1 GTR lives up to the iconic ‘GTR’ title, made famous by the 24 Hours of Le Mans-winner - the McLaren F1 GTR in 1995 (20 years ago) during its debut year.

The P1 GTR Driver Programme will also be underway in a few weeks, which will allow them to helm what should be considered the most extreme limited-run track cars ever built at some of the world’s most iconic racing circuits.

The McLaren P1 GTR will make its global debut at Stand 1240, Hall 1 during the 85th International Geneva Motor Show. 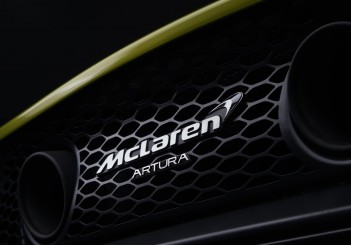