STUTTGART: Following its premiere in the S-Class, Mercedes-Benz is now offering its most advanced hybrid technology yet in the C-Class.

The Mercedes-Benz C 350 plug-in hybrid has a range of 30km miles in purely electric mode.

Its four-cylinder petrol engine, in conjunction with a powerful electric motor, gives it a total system output of 279 hp and torque of 600Nm.

The new C 350 plug-in hybrid thus delivers the performance of a sports car.

It is also equipped as standard with AIRMATIC air suspension plus a Pre-Entry Climate Control system that can be controlled via the internet. Prof Dr Thomas Weber, Member of the Board of Management of Daimler AG and responsible for Group Research and Mercedes-Benz Cars Development: "The plug-in hybrid is an investment in the future of Mercedes-Benz and we believe it will become established as the successful technology for maximum efficiency coupled with powerful dynamic performance. We will be launching ten new plug-in hybrid models up to 2017."

The C 350 plug-in hybrid uses the currently most advanced form of hybrid technology. Its electrical energy storage unit is a high-voltage lithium-ion battery with a total capacity of 6.2 kWh, which can be charged from an external power source and so makes an effective contribution to the low consumption and emission figures. The battery is water-cooled, weighs around 100 kilograms and is mounted in a sheet steel housing underneath the rear axle in order to maximise crash safety, driving dynamics and boot space.

Thanks to an intelligent on-board charging system, the battery can be recharged in around 1 hour 45 minutes at a wallbox or at one of the growing number of public charging points (230 V, 16 A, 3.7 kW single-phase), which in some cases offer privileged parking. Alternatively, charging via a standard domestic socket is of course also possible. Depending on the connection, a charge time of around two hours is achievable.

Despite the space taken up by the battery, the C 350 plug-in hybrid still has a boot capacity of 335 litres in its saloon format. In the new Mercedes-Benz C 350 plug-in hybrid, this hybrid drive concept is combined for the first time with an efficient four-cylinder petrol engine. From a displacement of just under two litres, it produces 211hp and maximum torque of 350Nm.

The electric motor of the C 350 plug-in hybrid has an output of up to 60 kW and delivers torque of 340 newton metres. A total system output of 279hp, as well as torque of 600Nm, are thus available.

Meanwhile, the AMG brand promise and the typical character traits make the extensive product line-up within the C-Class range even more attractive.

The new C 450 AMG Sport 4MATIC expands the product range of the performance and sports car brand of Mercedes-Benz with another new AMG sports model. 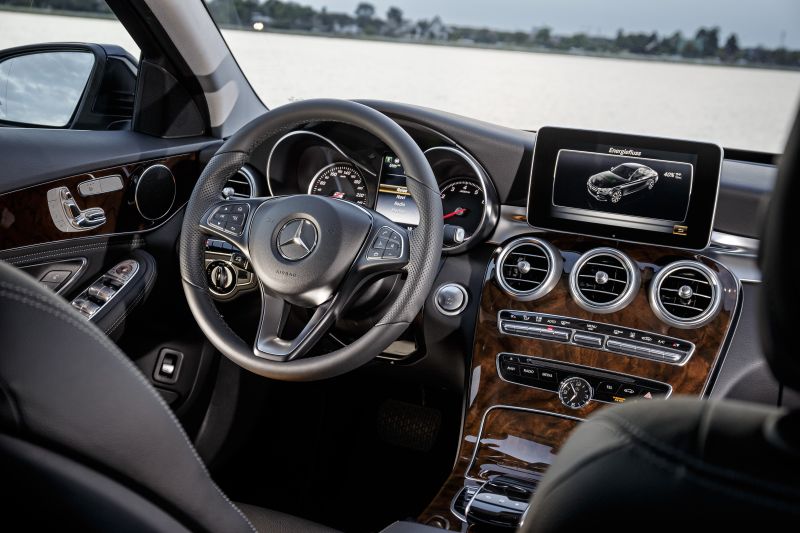 As an attractive entry into the world of AMG, the C 450 AMG Sport 4MATIC combines a 367hp 3.0-litre twin-turbo V6 engine with a permanent all-wheel-drive system and sophisticated suspension technology adopted from the Mercedes-AMG C 63.

The result is fascinating Driving Performance and the hallmark emotional expressiveness of the brand.

The new AMG sports model is available as a saloon and an estate model.

Meanwhile, at the Detroit auto show 2015, Mercedes-AMG is in highly dynamic mood as it enters the 2015 automotive year with the new GLE 63 coupe.

The powerful heart of the vehicle – the AMG 5.5-litre V8 biturbo engine – beats even faster in the new Mercedes-AMG GLE 63 coupe with the highly sporty S‑Model which is rated at 585hp.