LONDON: The Guinness World Records title for the largest glow-in-the-dark painting has been claimed by the all-electric Nissan Leaf and its 207.68m2 self portrait.

Cook used the tyres of the Lead to drive the glow-in-the-dark paint across the surface of the canvas. Nissan received the award on Mar 20 after 61 hours that required 60 litres of luminous acrylic paint and a large PVC coated canvas.

The innovative finish applied to the Nissan LEAF absorbs UV energy and other visible radiation during daylight hours and glows for between eight and ten hours after the sun goes down; making it the ideal tool for the glow-in-the-dark painting.

“This has been one of the most challenging paintings I’ve ever been asked to create – but it looks fantastic! The full-sized glow-in-the-dark Nissan LEAF is one of the more extraordinary things that I have used as a painting tool,” said Cook.

The Nissan-backed painting beats the previous record of 164.6 square metres set by Saint Lucas, in Eindhoven, Netherlands, on Jan 23, 2014. 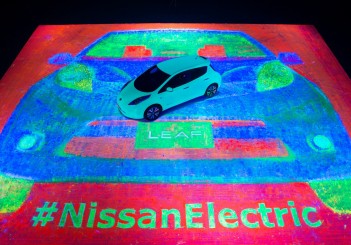