"The overall result is very promising and shows the strategy to further electrify our fleet is working and is in line with demand," said Detlev von Platen, member of the Executive Board responsible for sales and marketing.

Porsche increased its deliveries in all sales regions worldwide.

The share of electric vehicles was particularly high in Europe, where total deliveries rose seven percent to 86,160 vehicles, of which around 40 percent were plug-in hybrids or all-electric cars, according to Porsche. 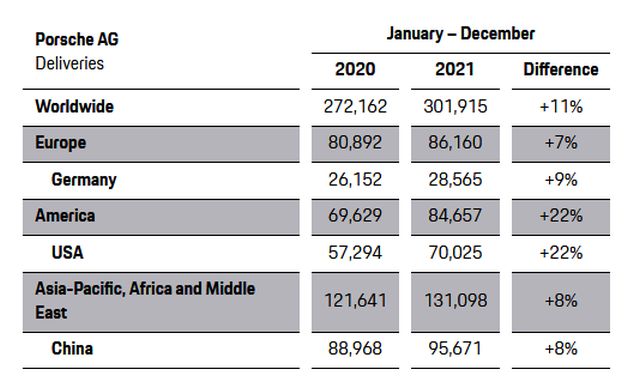 The models with the highest demand in 2021 were again the brand's SUVs, led by the Macan. A total of 88,362 customers became Macan owners. The Cayenne followed in second place with 83,071 vehicles.

The all-electric Taycan saw an outstanding increase: a total of 41,296 units, which is more than double the number of deliveries compared to the previous year.

With 95,671 units delivered, eight percent more than in the previous year, China remained Porsche's largest single market in 2021, according to the company. Porsche also posted increases in deliveries in Germany, where 28,565 vehicles were delivered, nine percent more than in the previous year, and in the United States, where deliveries rose by 22 percent to 70,025 units.

"Demand remains high, and our order books are looking very robust, so we start 2022 full of momentum and confidence in all regions of the world," von Platen said.  - Xinhua