Proton brand-building in focus as it looks back on 2018 SUBANG JAYA: Proton looks set to face a busy 2019 as the local carmaker gears up to focus on brand-building.

It is expected to announce a series of initiatives towards that goal in the course of the year.

Meanwhile, 2018 has been a year of ups and downs for the national car maker as it underwent an upheaval under a transformation process with strategic partner Geely in charge. The changes were necessary to restore public confidence in the brand and to make Proton competitive - a situation it struggled to adapt to following decades of protectionism.

Turning Proton around will require more years of hard work as success doesn't happen in weeks or months.

Still, despite the frustrations and resistance from within and without Proton as Geely set to work to change bad practices and mindsets, improvements did happen in 2018.

Proton employees would be the first to see the bright side of the year that went by. They identified 10 highlights that would be important markers of its turnaround.

The 2018 ended with the launch of the X70 sport utility vehicle (SUV) by  Prime Minister Tun Dr Mahathir Mohamad; the new model was also the most extensively covered vehicle by the media and resulted in a well-spring of being interest from Malaysians who flocked to showrooms to place advance bookings.

Pre-launch publicity efforts for the new model started much earlier in 2018.

On April 14, the online naming poll was launched to get Malaysians to select a name, garnering a huge number of responses.

The favoured choice of course was the X70 moniker, both for its simplicity and easy naming convention making it applicable in a wide number of export markets.

Focus turned to the current range of Proton models on July 17 with the launch of the Proton 1-Tank Adventure, which invited owners of the Iriz, Persona and Saga to compete alongside media members and "influencers" to explore the attractions of various Malaysian states on a single tank of fuel.

It then shifted to the deepening of the collaboration between Geely and Proton with a Heads of Agreement signing ceremony being held in China in August to explore future plans to build and sell Proton cars there.

In the same month, the company created a new entry in the Malaysia Book of Records for most people in an MPV when 55 people managed to squeeze themselves into an Exora during the Ace the Space Challenge.

In September, the Proton X70 was previewed to invited guests, kicking off a series of events that brought the SUV to seven major cities/towns in Malaysia.

A brief respite from product centred events followed on Oct 13 with the company’s sponsorship of the HSN21KM race but the spotlight returned to the X70 on Oct 17 with the launch of an online booking platform specific to the SUV.

As the year rolled into November, there were two more milestones where the X70 received a five-star Asean NCAP rating and was quickly followed by its public debut at KLIMS 2018.

Lastly, the company managed to win the Sepang 1000KM race on Nov 23 with its Iriz, to mark the fourth model to have won the race so far. 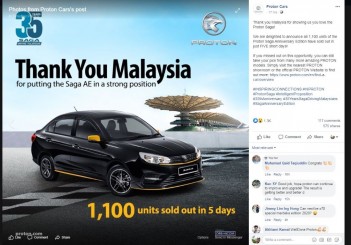