PETALING JAYA: A high quality security window tint film on a car can successfully foil traumatic smash-and-grab incidents, and this was highlighted recently by a viral video of an ambush of a Lexus SUV (sport utility vehicle) by armed robbers in Banting, Selangor.

In the CCTV recording, the Lexus SUV driver had driven into the driveway of her house before a gang of robbers pulled up in a Toyota Vios, following which a robber smashed his weapon into the driver’s window repeatedly.

Impressively, the window cracked but didn’t break, and the Lexus SUV driver reversed her car and rammed into the Vios. The robber tried to smash the driver’s window again, but gave up after his accomplices decided to escape.

In recent years, brazen crimes like this have resulted in rising demand for security films such as the 3M Scotchshield Crystalline Security AutoFilm, which improves the integrity of the car window so that criminals do not have quick access to your valuables.

This window autofilm has tensile strength of up to 25,000 psi and features the proprietary Multi-layer Optical Film (MOF) technology that combines over 200 layers in a film; yet is thinner than a Post-it Note. 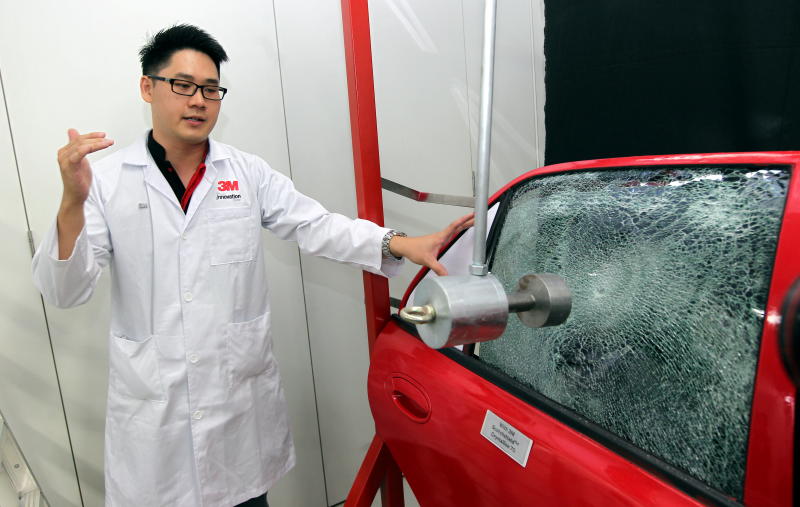 It can hold shattered glass together, which minimises the risk of injuries and slows down vehicle break-in attempts. The 3M Scotchshield Crystalline Security AutoFilm also provides superior heat rejection and rejects 97% of infrared and up to 60% of the total solar energy coming through your car windows.

This means the car cabin is much cooler, as we found out after installing the autofilm on the family’s five-year-old Volkswagen Polo sedan.

However, we needed to change our driving behaviour at toll booths as the SmartTag device uses infrared light technology, while the 3M Crystalline multi-layer optical film technology rejects 97% of infrared (as infrared is the major contributor of heat).

This means we have to slow down to a crawl at the toll booth and hold the SmartTag device very close to the windscreen, in order for successful infrared communication.

One way to solve this is to cut a small part of the autofilm to create a gap, to enable easier infrared transmission.

For our car, we chose the SCR40 grade which provides the highest tint level, and installed the security autofilm on the car’s side windows.

The front and rear windscreens were fitted with the conventional Crystalline AutoFilm (without the security feature). Installation was done by Arctic Oto Sdn Bhd in Setia Alam, Shah Alam and we were told that the job can be finished in four hours (or five hours if the car has tint film that needs to be removed first).

In fact, the installation job on our car took only three hours. Also, the Crystalline AutoFilm is a non-metallised film that does not interfere with mobile devices, GPS signals and satellite radio reception - meaning you won’t be frustrated by lost connectivity as with the usage of metallic or hybrid window films.

The autofilm also blocks up to 99.9% of UV (Ultraviolet) light and provides a total SPF (Sun Protection Factor) of over 1000.

This helps provide vehicle occupants with significant protection from the dangers of the sun’s UV rays - prolonged exposure has been cited as a major risk in causing skin cancer. UV light contributes to sunburn and other harmful skin conditions as well as to the fading and deterioration of fabrics and leather.

The autofilm is designed to significantly reduce glare from blinding sunlight, and also allow visible light into your vehicle while keeping heat out. This means the car’s occupants can see better through the windows, and stay cool at the same time.

It’s backed by a five-year e-warranty that covers replacement of the film due to bubbling, peeling or blistering (glass breakage not included), as well as all materials and labour. Installation can be done at any of the 65 3M dealers and installers nationwide.