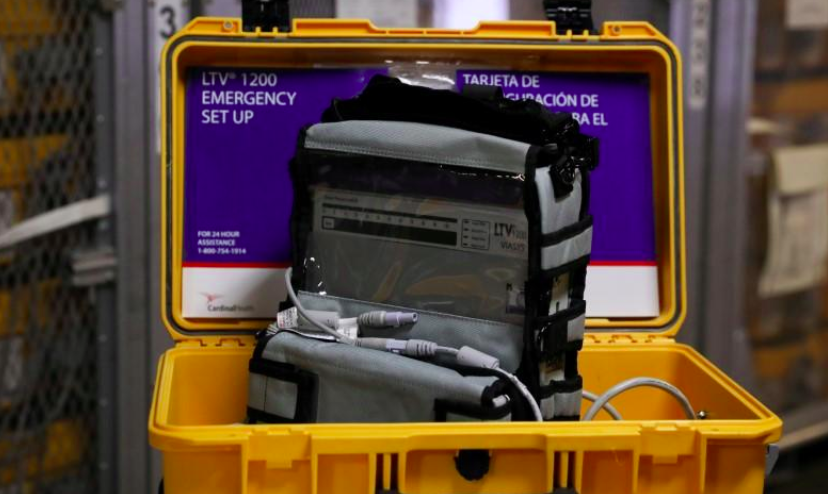 A ventilator is seen at the New York City Emergency Management Warehouse, where 400 ventilators arrived and before being shipped out for distribution. — Reuters

WASHINGTON/DETROIT: US President Donald Trump on Friday invoked emergency powers to require General Motors Co to build much-needed ventilators for coronavirus patients after he accused the largest US automaker of “wasting time” during negotiations.

Trump, who has been on the defensive for not moving faster to compel the production of medical equipment, for the first time invoked the Defence Production Act, saying GM was not moving quickly enough even though earlier on Friday the largest US automaker announced it would begin building ventilators in the coming weeks.

Asked about negotiations with GM over ventilators, Trump expressed anger with the company’s decision to close an assembly plant in politically important Ohio. He also criticised GM’s prior decisions to build plants outside the United States.

“I didn’t go into it with a favourable view,” Trump told a news conference of the GM talks. White House adviser Peter Navarro said the administration ran into “roadblocks” with GM this week.

GM said in a statement in response to Trump that it has been working with ventilator firm Ventec Life Systems and GM suppliers “around the clock for over a week to meet this urgent need” and said its commitment to Ventec’s ventilators “has never wavered.”

The act grants the president power to expand industrial production of any key materials or products for national security and other reasons.

New York governor Andrew Cuomo and other Democrats have urged him to invoke the act, but the president had been reluctant to do so until now.

Democratic US Senator Ed Markey said, “About time. Now, tell us every day: which companies will be making more of this equipment, how much is being made, and where the equipment is going.”

On Friday, the number of confirmed coronavirus cases in the United States topped 100,000, the highest in the world according to a Reuters tally. The US death toll topped 1,550.

Trump also said countries such as Britain, Germany, Spain and Italy need ventilators and that if the excess volume is not needed, the United States can export them.

Earlier, Trump lashed out at GM and Ford Motor Co for moving too slowly just hours before GM said it would build medical equipment at an Indiana plant.

Trump criticised the US automakers and said he expected the United States would make or obtain 100,000 additional ventilators within the next 100 days.

The attack on the automakers coincided with rising tension between Trump and the Democratic governors of New York and Michigan, who have criticised the administration’s response to the Covid-19 pandemic.

On Thursday evening, Trump questioned in an interview on the Fox News network whether New York state needed 30,000 ventilators to cope with rising numbers of coronavirus patients, as Cuomo had said.

GM and Ford separately announced earlier this week they were working with medical equipment companies to help boost ventilator production.

GM and its partner Ventec confirmed after Trump’s tweets that the No. 1 US automaker would deploy 1,000 workers to build ventilators at its Kokomo, Indiana, parts plant and ship as soon as next month. It was aiming to build more than 10,000 per month with the ability to go higher. Suppliers in the effort were told the target was 200,000 ventilators.

But early Friday, before GM issued its release, Trump attacked the automaker and chief executive Mary Barra on Twitter, reviving his grievance with Barra for closing and selling a car factory in Ohio, a state critical to the president’s re-election campaign.

“General Motors MUST immediately open their stupidly abandoned Lordstown plant in Ohio, or some other plant, and START MAKING VENTILATORS, NOW!!!!!! FORD, GET GOING ON VENTILATORS, FAST!!!!!!” Trump wrote on Twitter on Friday.

“They said they were going to give us 40,000 much needed ventilators, ‘very quickly’,” Trump said on Twitter of GM and Ventec’s effort. “Now they are saying it will only be 6000, in late April, and they want top dollar.”

Trump’s comments about GM and Ford came after a New York Times story Thursday suggested the White House had backed away from announcing a major ventilator deal with GM and Ventec because the price tag was too high. That drew criticism from Democrats.

Following Trump’s tweets, Ford said it was moving as fast as it could to gear up its ventilator manufacturing efforts and was in “active conversations” with the Trump administration seeking approvals. Ford said it has “teams working flat-out with GE Healthcare to boost production of simplified ventilators.”

Other automakers have said they are working to produce ventilators, masks and other medical equipment. Outside the United States, Chinese, Indian and German car makers have separately announce their plans to make ventilators or parts for the machine. They include BYD, SAIC, GAC Motor of China; Mahindra of India; and Volkswagen of Germany.

On Friday, Toyota Motor Corp said it was “finalising agreements to begin working with at least two companies that produce ventilators and respirators to help increase their capacity.”

New York City mayor Bill be Blasio on Friday said on Twitter that Tesla Inc had agreed to donate hundreds of ventilators to hospital intensive care units in New York City and the state of New York.

Tesla on Friday did not respond to a request for comment on where it got the ventilators and whether the company was producing any ventilators of its own, something Musk has said the company will do.