Taking the road less travelled with the Proton X70 PETALING JAYA: A group of Proton X70 owners has embarked on The Malaysia-China Amazing Trip, organised by the Borneo Leisure Touring Team, which will take participants on a 13,000km, 33 day odyssey across 4 countries – Malaysia, Thailand, Laos and China.
Day 1 – Malaysia to Hatyai, Thailand, 540km and 12 hours.
- Traffic was heavy on the way up North, but the journey was made easier thanks to the comfortable seats, music streaming function and powerful air conditioning system in the Proton X70.
- After exiting the PLUS highway, the group paid a visit to Proton Juru Auto-city for a quick vehicle inspection and lunch hosted by the branch.
- Used the navigation function on the Proton X70 to direct the convoy to the Jabatan Pengangkutan Jalan (JPJ) at Seberang Jaya to apply for permits to enter Thailand.
- The border crossing was at Padang Besar and was done without a hitch so upon reaching Hatyai, the convoy headed to dinner with Proton Motors Thailand.
Day 2 – Hatyai to Hua Hin, 740km and one of the longest legs of the trip. The Borneo Leisure Touring Team departs Hatyai as they head to Hua Hin.
- For the first really long day of travelling, all participants were thankful for the comfortable cabin and excellent ride comfort of the Proton X70.
- At a cruising speed between 90-120kph, there is very little wind and road noise and the suspension absorbs the inconsistencies of the Thai road surface to leave the cabin occupants undisturbed.
- The air ioniser was also much appreciated and kept the cabin smelling fresh at all times.
Day 3 – Hua Hin to Tak, 619km.
- The third day took the group to Tak, capital city of the Tak Province that shares a long border with Myanmar.
- The journey was uneventful as the smooth 1.8 TGDI engine used its torque to overtake slower moving traffic to power the Proton X70 to the head of the pack.
- Many small towns were passed along the route and though traffic was light, the Auto Hold function was highly appreciated as it made stop lights and traffic jams painless. 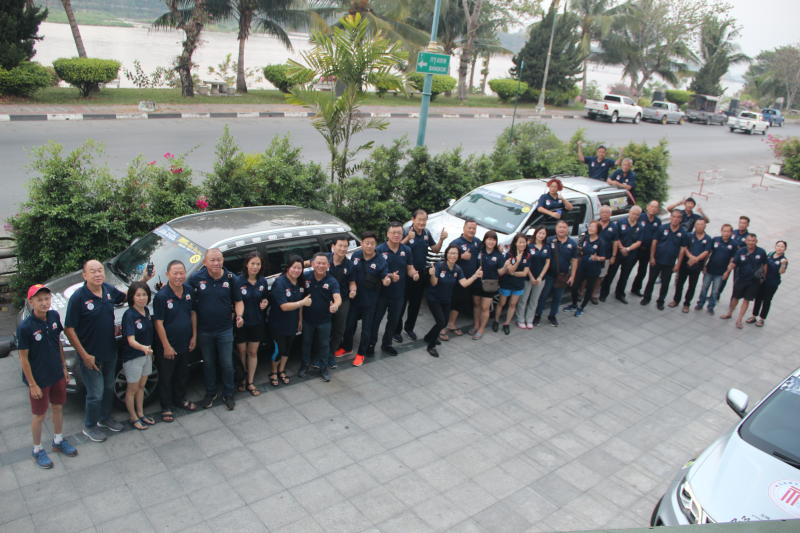 The Borneo Leisure Touring Team are posing for a group photo before departing for Chiang Khong.
Day 4 – Tak to Chiang Khong, 580km and 10 hours on the road.
- On the way to Chiang Khong, the group stopped by the infamous Magic Hill on Highway 105.
- The group then proceeded to Chiang Khong to put up for the night facing the Mekong River and Laos.
- On the fifth day, the group would cross the Friendship Bridge to Laos.

The Proton X-70 Fleet reaches the border crossing at the Yunnan Province, China.
Day 5 – Chiang Kong to Mengla, 430km and crossing into China.
- Physically driving to a border makes the experience more memorable, especially if that border is the starting point of a day when you cross into three different countries.
- The fifth day of the Malaysia China Amazing Trip saw the convoy cross over from Thailand to Laos and then China.
- We arrived at the Thai border at 8am and since it opened at 8.30am, we had time to take some pictures with the Proton X70 and its surroundings.
- The capital of the Lao province of Bokèo, on the border with Thailand, is Ban Houayxay.
- The town lies on the Mekong River opposite Chiang Khong with The Fourth Thai–Lao Friendship Bridge at Ban Houayxay now the northernmost border crossing between the two countries.
- The road leads to Asian Highway 3, which runs through Ban Houayxay and extends north to Yunnan Province in China.
- The country changed and so did the road surface, potholes instantly multiplied, human traffic increased and the landscape turned greener but the Proton X70 took everything in its stride.
- The roads got hilly too but the Proton X70 handled the terrain with ease, powering up steep slopes and good handling to keep all four tyres in contact with the road.
- Finally, we arrived at the border to China where more adventure awaits. - What else will we face over the next 28 days? Stay tuned to find out.

The Borneo Leisure Touring Team as they arrive at the border to China.