Tata considered Malaysia as an important market in Asean after Indonesia and Thailand, he said.

Wasan said the company intended to venture into the commercial vehicle segment as it has the potential to grow further and revolutionise transportation industry in Malaysia.

"We will introduce several models soon and offer our full range of products within the next two to three years," he told a media familiarisation trip to the Tata plant in Pune, Maharashtra, India, recently.

He said the Malaysian car industry was interesting and promising, adding that the speed of Tata's product offerings could probably be much quicker than other countries that Tata Motor was already in. "For a start, Tata will introduce the truck and pick-up truck models. After that, we will see how the brand and the product build up," he said.

Tata Motors has a presence in Malaysia in the past, but during that time the company has limited scope in terms of product range and opportunity.

However, it has made tremendous progress in the last eight to 10 years with new product generation like pick-up truck, Xenon, that is comparable with similar model in the world.

Xenon has successfully entered the developed market like Australia.

Wasan said Tata Motors' brand and product awareness were there because it has a history in Malaysia. "The models that we sell in Asean countries and India come in handy for road condition in Malaysia. In a way there is good natural fit, or synergy," he said.

On styling and design, he said, they were not something important for the company in the past because consumers just wanted basic vehicle but they had changed.

Currently, all new vehicles were comparable in terms of styling and design with the best in the similar class such as Xenon model, he said.

"Today, we have a range of vehicles that has gone through research and development. So, we are in much stronger position to enter any developed market, including Malaysia," he said.

On Sept 9, 2013, DHCV sealed agreements with Tata Motors for the former to become the exclusive distributor of Tata Motors commercial vehicles and expand its vehicle assembly business and distribution network in Malaysia.

"We value DRB-Hicom and will work to make the relationship last," said Wasan.

Below is a Xenon video from the Tata archives. 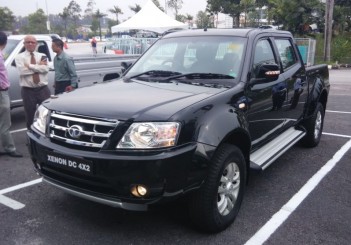