At the Tokyo Motor Show 2019, what caught the attention is a new Daihatsu SUV.

Striking in shape, the SUV caught Perodua officials by surprise as they didn’t expect it to be showcased at the show.

In fact, it’s a small turbo-charged engine that will mark the entry of using small displacement engines powered by a turbo charger.

Daihatsu also showed off its coupe that was powered by the small turbo engine.

“We are studying if Malaysia can accept the size of an engine for the size of a car,” says Zainal in reference to the SUV.

It sells the Aruz, which is a SUV but that is based on a Toyota model.

Given the rise in sales of SUVs in Malaysia, it would not be a surprise if the new Daihatsu SUV makes its way to Malaysia in the future.

With the Tokyo Motor Show showcasing a host of electric-powered cars, Daihatsu too unveiled four concept cars for different usage.

There is a public transport vehicle for the last mile, a next generation mini truck, a mini van and a mini SUV. 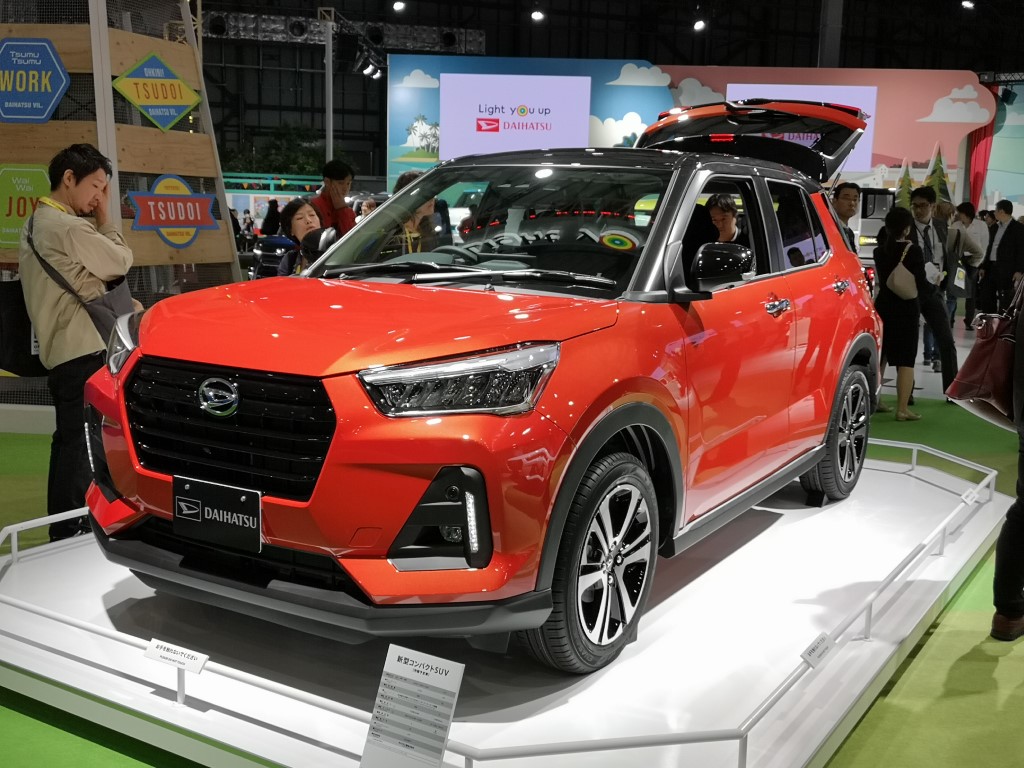 At one of Daihatsu’s most advanced factories, a car rolls off the production line every 1.1 minutes.

The assembly line moves at a slow, constant speed from the time metal parts are stamped by robots to when the vehicles are checked for defects just before they wait in line to be shipped to other parts of Japan.

At the plant where 1,700 people work in synchrony to finish the cars, there is a chart on the wall that showed Daihatsu’s evolution as a carmaker.

Visitors can see how the company started off as a maker of light commercial vehicles with its first passenger car being the Mira in the mid 1980s.

Malaysians know the Mira by another name very well. Rebadged with some modifications as a Kancil, the car launched Perusahaan Otomobil Kedua Sdn Bhd (Perodua) to where it is today.

Perodua, with a 40% market share now of the Malaysian automobile market, is looking to gain more sales by luring motorcycle owners into buying cars.

Like the Kancil which sought to do the same by bringing a different and safer mobility than motorcycles, Perodua now wants to figure out a way of driving sales to a higher level than before.

“If we manage to convert motorcycles into vehicles, we will expand the market,” said Perodua president and chief executive officer Datuk Zainal Abidin Ahmad.

Car sales have plateaued in Malaysia over the past few years, with sales hovering around the 600,000 mark.

With Perodua forecast to sell 235,000 units in 2019, a record, sales have been bolstered by its bestselling Myvi. Its other models like the Bezza and Axia have appeal for entry-level car owners, given its affordability.

The car company still has room to handle higher sales by further expanding its plant, saying that it can manufacture up to 320,000 cars at its facilities by fully utilising working shifts and production.

It can free up space for production by moving the making of some auto parts to its vendors.

One of its own

Seeing how the company has grown to where it is today, he understands the DNA of Perodua very well and is keen to put his own imprint on developing the company.

What will help is the growth of the company and the relationship it has with Daihatsu. Perodua accounts for a sizeable chunk of Daihatsu’s sales but it has moved on from a simple rebadging of imported cars or completely-knocked-down kits.

The new Myvi and Bezza are homegrown and it has grown its vendor base to 150 that make parts for it. The Axia is basically engineered at home using a Daihatsu model platform.

“Our vendor capability has improved and more than 40% of them can design parts for the cars,” says Zainal.

In fact, he says, some vendors in Malaysia are part of Daihatsu’s supply chain and if more can sell parts and in greater numbers, they can improve their offering to Perodua.

The growth of Perodua as a company is also apparent at Daihatsu’s Kyushu plant.

The Japanese car make, which is owned by Toyota, has 220 Malaysians working at the plant and more than 30 are in research and development.

Rising to a dominant market share in Malaysia took luck and perseverance.

Its success was made by its best-selling Myvi which remains its top sales model.

In fact, demand for Perodua cars are great that an equal part of its buyers are repeat customers and first-time buyers.

Zainal, however, does not want Perodua to be pigeonholed as just a maker of affordable cars. It wants to be known as a maker of quality cars.

Perodua and Daihatsu can continue to make good money doing so as its ability to make small cars at a low cost and the design of its plants at Kyushu shows that.

In fact, Perodua’s latest plant is modelled after the second plant in Kyushu, where a smaller footprint that is about half the size of its first plant is used to make an equal number of cars.