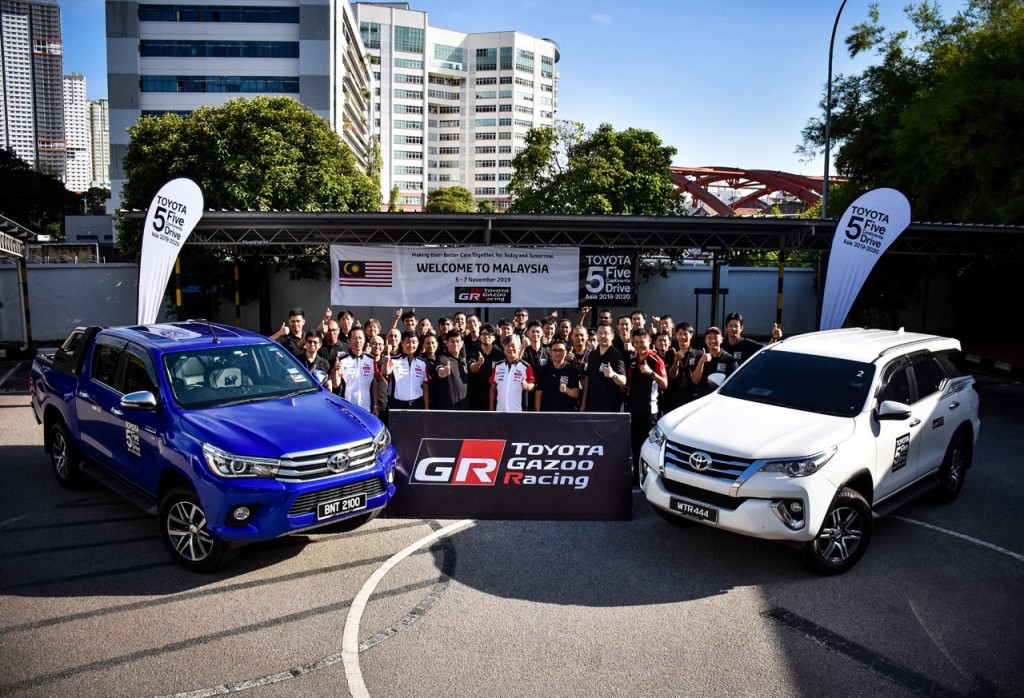 PENANG: The Toyota 5 Continents Drive Project is a unique initiative whereby Toyota employees, technicians and engineers drive a host of Toyota vehicles to better understand the cars, the conditions and the culture of the countries that they drive through.
It is inspired by the President of Toyota Motor Corporation, Akio Toyoda, and the project aims to make product improvements with this 'hands-on' approach which is part of this project's philosophy called Genchi Genbutsu which ultimately results in building even better cars to its customers around the world.
Genchi Genbutsu means ‘go and see for yourself’. And that is exactly what they have been doing since the Toyota 5 Continents Project began back in 2014 starting with the Australian continent. The Malaysian-leg of the Toyota 5 Continents Drive Project flagged-off in Penang recently.


On Nov 5, 2019, the Malaysian leg of the Toyota 5 Continents Drive Project began with a total of nine cars and 33 participants. The vehicles used were the Hilux, Fortuner, Innova, Vios, Corolla, Rush, CH-R and Yaris.
A flag-off ceremony was held at an S&D Tama Sdn. Bhd. owned Toyota showroom in Penang and was attended by Deputy Chairman of UMW Toyota Motor, Akio Takeyama and President of S&D Tama Sdn Bhd, Katsuhiko Tamura.
The route would include a drive up to Cameron Highlands, Pahang and then to UMW Toyota Motor's head office in Shah Alam, Selangor before heading down south to Singapore.
In a press conference held just before the flag-off, it was explained to members of the media about the purpose of the Toyota 5 Continents Drive Project. "I have been part of the 5 Continents Drive since 2014 when we started in Australia. I have found that the most difficult thing to learn is the culture of the country. You also have to learn about the specific market Toyota is in, road conditions, driving styles which is why we selected as many countries as possible.


"I believe once we understand a culture then we have better understanding to the needs of the vehicle for that country," said Field General Manager, Parts and Accessory Field, Customer First Promotion Group, Toyota Motor Co. Osamu Sadakata.
"We are excited to be in Malaysia. We want to see and learn from the roads and from each other. The traffic and driving style, vehicle use, is sometimes very different from Japan and our test tracks," said Advanced Vehicle Engineering Development Division, Kazuaki Abiru, who is also the captain of the drive team in Malaysia. Participants of the Toyota 5 Continents Drive Project getting ready before beginning the journey.
“We are delighted that Malaysia is included in the Toyota 5 Continents Drive Project, a project that is of high priority to Toyota Motor Corporation. The varied conditions of roads and traffic should provide the participants with valuable insights that can help them develop ever-better cars for our customers,” said Takeyama.

The remaining countries for the Asian leg are Indonesia, the Philippines and Vietnam. In 2020, the 5 Continents Drive Project will continue through China and East Asia before ending in Japan, just in time for the 2020 Tokyo Olympic and Paralympic Games.

The 5 Continents Drive Project is carried out under the umbrella of Toyota Gazoo Racing initiative.