A recent experience with these pumped-up variants in Germany could be a prelude to their arrival in Malaysia.

IT MIGHT have taken Audi a bit longer to join the bandwagon but after sorting its “power” models under the “S” and “RS” category, this German carmaker decided to give them a more distinct grouping.

The RS is now the chosen range, comprising powerful and sports cars from the respective model lines in much the same way that BMW has done with its M series and Mercedes-Benz with the AMG line. 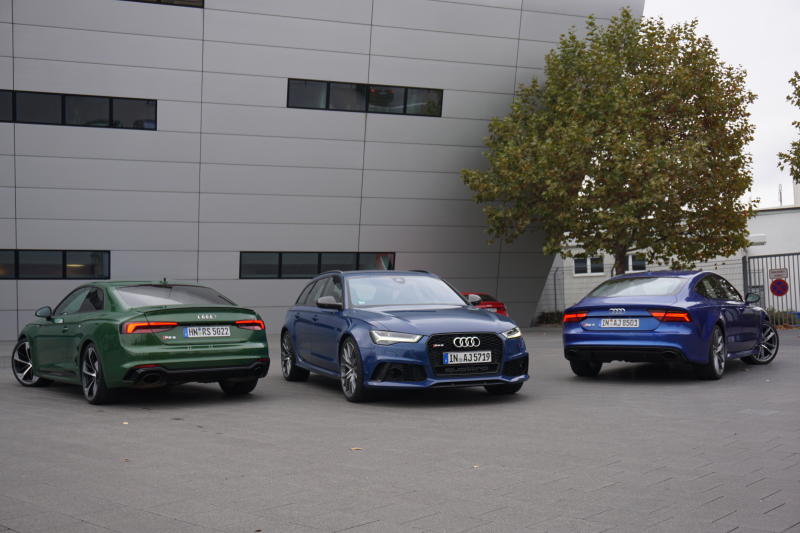 After all, there is no shortage of exciting-to- drive Audi cars but with the RS models, it sets a benchmark to qualify them to carry that badge.

Actually the RS model is not new as it first saw daylight in 1993 in the Audi RS 2 Avant; over the years Audi gradually expanded the RS range to today’s RS3 to the RS7, although the R8 is still seen as the top honcho.

We were invited to Ingolstadt again recently to get a road feel of a few RS models, these being the RS5 coupé, RS6 Avant and RS7 Sportback.

The drive experience was topped by a stint at Audi Sport with the R8 plus, about 18 months after we first enjoyed a similarly exciting session at the same place. This time, however, we got to complete the entire routine that we missed out on earlier as the place was booked then for another group of participants leasing to time constraints.

And this was to try and correct an understeering and oversteering moment respectively in the R8 plus, with its electronically controlled dynamic systems (ESP) turned off.

To recap, the Audi R8 plus is the top honcho in the RS group being a dedicated two-seater sports car sharing similar mechanicals with the Lamborghini Huracán. Although it was drizzling constantly, the water pumps were still activated to keep the surface at the huge grounds sufficiently wet.

We started with the ABS braking session (which we had done more than a year ago) and the idea was to see how we could control the R8 and bring it to a complete stop without much drama.

When we could do that consistently, we were asked to brake a little later and see if we could achieve the same car control; that means braking a little later before slamming hard on the brake pedal.

Needless to say, it got harrier trying to tame this beast even though the speed difference was probably about 10kph or higher; we were braking at about 90-100kph. The fun part was to follow; we started with understeering and that meant going into a turn at about 80kph and lifting off the accelerator pedal before having the steering in full lock (in this case to the left).

On a wet surface where traction was minimal and there was no ESP to activate the brake systems to correct the sudden yaw, the R8 drifted in the direction that we entered the turn (or going straight instead of turning).

That is described as understeering as the car is not turning in the direction according to the steering movement made.

What we were supposed to do was to turn the steering back by half a lock (or half the turn that we made earlier) and ease on the accelerator to power out. It was easier said than done and the guys and gal in our Malaysian media team had our hands full trying to get the R8 ‘back in line’ consistently.

The same went for the oversteering manoeuvre; we started nearer the turn point (marked by a cone) entering it at about 50-60kph.

We turned the steering at half lock and floored the accelerator; this unleashed most of the 560Nm torque that in turn spun the car in an oversteer.

That is best explained as a situation where the car is turning more than it should according to the steering movement made.

And to correct it? Ease off the accelerator, restore steering direction and power out. Some got to do it correctly the second or third time but to do it consistently all the time, well that needs lots of practice.

Each of us had six to seven attempts at it but the way that some were going all over the place (us included), we were surprised to see the instructor standing confidently at a point where he could easily be knocked into in an out-of- control situation!

The track drive was different this time; before the full distance drive we covered the 2.2km circuit at the Audi Sport venue in ‘halves’.

Going by the rules enforced, we could do each half of the circuit without wearing a crash helmet but had to do so for the full circuit drive later.

We preferred this routine as we could enjoy the drive better by pushing the R8 accordingly for the respective corner; it was less tiring trying to remember how we should approach each corner over the longer stint (which we opted out of). Perhaps our ‘training’ stints in the R8 couldn’t have been better demonstrated than in a little road accident through no fault of our media members.

A team in an RS6, waiting for the lights to turn green at a junction in Ingolstadt, had a firsthand experience of being in an accident caused by someone losing his car in a ‘powered’ oversteer.

A relatively young German driver in a Camaro approaching the junction along a road at an angle to the spot decided to gun it as he turned left.

It was about 3-4 degrees Celsius in the morning and the road was mildly damp; with so much torque going to the rear wheels suddenly, the car’s rear broke loose causing it to spin out of control. The Camaro knocked into an Audi (driven by a German woman with her child in it) waiting alongside the RS6; the force of impact was so great, it pushed that Audi against the RS6, causing bodily damage.

That was a classic example of how hard it is trying to correct a car in a ‘powered’ oversteer without ample practice.

Apart from that little hiccup that retired the RS6, reducing our media fleet to three cars (as it became a police case), the road drive experience was largely in enjoying the cars’ power characteristics on the autobahn and in the city.

The RS5 coupé is powered by a 2.9-litre TFSI bi-turbo V6 that delivers 450hp and 600Nm, and accelerates to 100kph in 3.9 seconds; it represents the new Audi RS design language. Same standing start acceleration aside, the RS6 and RS7 picked up speed quicker than the RS5 on the move on the autobahns.

We barrelled along at above 220kph easily (250kph was reportedly achieved by some), slowing down considerably for the mist shrouded sections of the autobahn.

If such exciting Audis are making their way to Malaysian roads, and our guess is that they would be the RS5 coupe and RS6 Avant models.