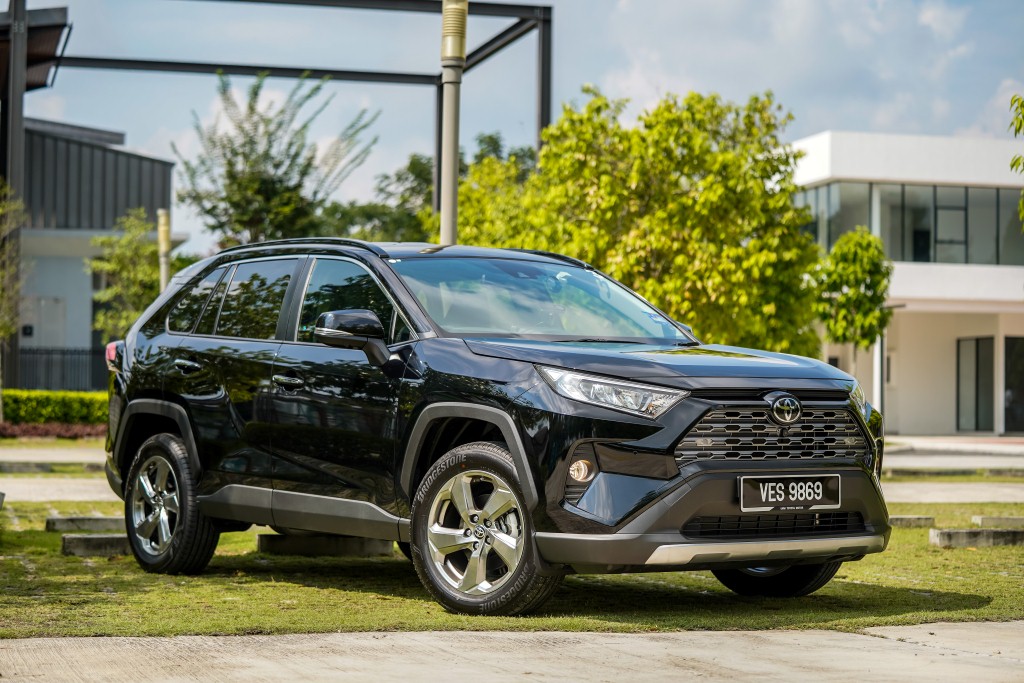 Prices are on-the-road without insurance, and takes advantage of the 50% reduction in sales tax from June 15 till December 31, 2020.

“The Toyota RAV4 has been a regular offering in our CBU line-up since the mid-1990s when we began selling the second generation. Now we are offering the fifth generation which was the 2019-2020 Japan Car of the Year. As before, owners will enjoy a great ownership experience with peace of mind where not only is there a five-year/unlimited mileage factory warranty but also after-sales support nationwide,” said Ravindran K.

The side mirrors are now positioned by the door with sleeker A Pillars for better visibility.

Takeyama said, “With the TNGA technology, driving the new RAV4 is much like driving a sedan vehicle with its great agility, stability and visibility”. The engines have world-leading thermal efficiencies as high as 40%, double the average of most internal combustion engines.

The 2.5-litre engine is paired with an 8-speed Automatic Transmission (Direct Shift 8-AT) while the 2.0-litre engine has a CVT with Sequential Shiftmatic.

For both transmissions, the driver can choose from Eco, Normal and Sport modes. Dimensionally, the cabin is wider at 1,855 mm with the longer wheelbase (+30 mm) benefitting spaciousness.

Other convenience features include a keyless Smart Entry & Start system, and more USB points for charging electronic devices, including a wireless charger pad (operating with the Qi standard).

At night, some spaces have soft, indirect mood lighting. A 7-inch Colour MID (Multi Information Display) complements a TFT Combination Meter which can be switched between analog and digital displays.

There's also a new 7-inch DVD-AVX infotainment system with 6 speakers and voice command, and a range of connectivity options such as Mirrorlink, Miracast, AUX, Bluetooth, AppleCarPlay and Android Auto.

The cargo space is also the best-in-class with a reversible cargo floor for multiple usage that is also height adjustable to create more space. Besides up to seven SRS airbags, the new RAV4 getsToyota Safety Sense, a suite of systems which assist the driver.

“When driving on highways, the Lane Departure and Lane Tracing Systems help you to stay safely within the white lines and in lane. The Pre-Collision System helps to avoid bumper accidents as well,” Akio Takeyama further explained.

There is also an Electro-Chromic (EC) rearview mirror to cut dazzle from vehicles behind and Rear Cross Traffic Alert (RCTA) and Blind Spot Monitor (BSM), both of which alert the driver when other vehicles are in the blind spot.

An Electronic Parking Brake (EPB) also has a HOLD feature for use on slopes.

Dual Digital Video Recorders are useful for retaining visual evidence in the event of an accident, while a Tyre Pressure Warning system can alert the driver of a puncture.

An ISOFIX point is also available at the rear for a compatible childseat.

Besides an engine immobilizer and alarm system, the RAV4 also has enhanced security with a Vehicle Telematics System (VTS).

This system uses GPS/GSM for tracking and can improve vehicle recovery should it be stolen.

This first-ever virtual launch that was held earlier today, is still available for viewing at www.rav4my.com.