STUTTGART: Daimler (Mercedes-Benz) is pursuing strategic research partnerships in the field of quantum computing, and has signed a cooperation agreement in this area with Google.

The design of Google's recent 72‑qubit Bristlecone chip features the highest number of quantum bits ever used in a quantum computer.

Qubits are the smallest possible unit of data storage and serve as a unit of measurement denoting the performance capability of quantum computers.

This cooperation agreement allows specialist teams from Daimler Group Research and IT to use quantum computers from Google in order to pursue concrete issues relating to the future shape of mobility.

The initiative is fully in line with Daimler's vision of serving customers in future not only as a vehicle manufacturer, but as an all-embracing provider of mobility services.

"Innovation and an inventive spirit have always been part of our DNA at Daimler. In inventing the automobile 132 years ago we initiated a pioneering process of transformation for people's individual mobility. Quantum computing could play a crucial role in future in developing sustainable and efficient mobility solutions, as well as in diverse applications within our company," Daimler AG observes member of the board of management Ola Källenius, responsible for Group Research & Mercedes-Benz Cars Development.

"Quantum computing has the potential to revolutionise the entire IT sector and, in turn, all other areas of industry. This technology is as yet still in the early stages of research and development – but it harbours vast potential. Our aim is to acquire experience with this new technology at an early stage. To this end, we are contributing concrete use cases from the automotive and mobility fields to the research partnerships," said Daimler CIO Jan Brecht. 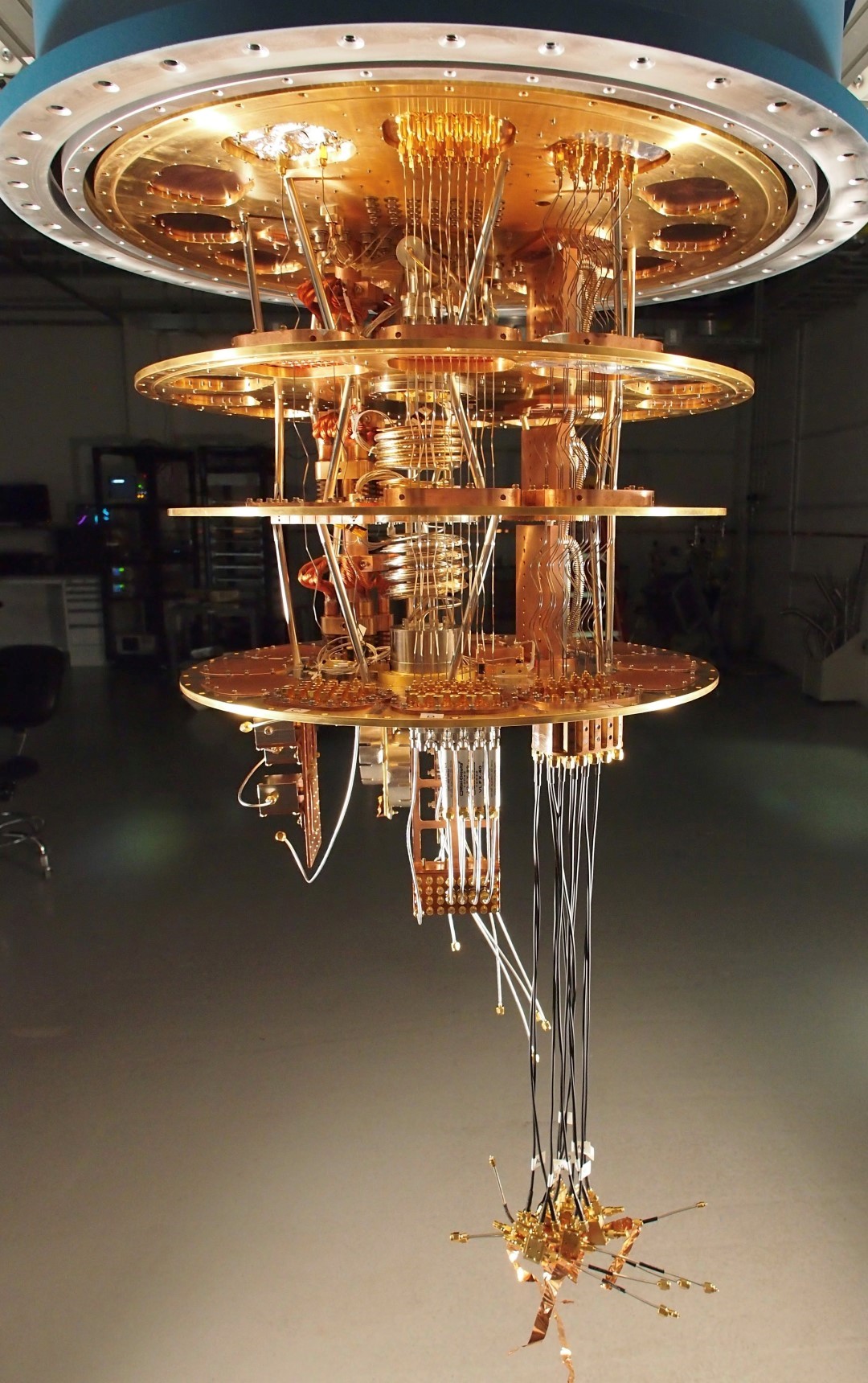 Construction of a quantum Computer.
A new dimension in computing: quantum computers

Put simply, a quantum computer is a computer which directly applies the laws of quantum physics. In contrast to present-day computers, it does not operate solely in a binary numeral system (0 or 1), but also knows other states - the so-called superpositions.

The numerous potential applications for quantum computers include the selection of new materials based on quantum chemistry, e.g. for the development of battery cells and the efficient and convenient provision of individual mobility.

Autonomous vehicles can be deployed here in urban environments and mega-cities, at the same time relieving the strain on the transport infrastructure as well as logistics planning in the vans segment.

Routes require to be planned here and updated in real time by reference to numerous variables and the the optimisation of production planning and production processes.

It can also help with deeper learning to advance the development of artificial intelligence.

The broad-ranging research activities in the field of quantum computing form part of the CASE strategy and underscore Daimler AG's transformation from vehicle manufacturer to mobility services provider.

The aim is to shape intuitive mobility for our customers through intelligent dovetailing of the CASE topics.

Did you know that…

...quanta are neither particles nor waves? Particles are objects with clearly defined borders.

Two key characteristics of particles are that they can be localised and counted. Classic waves are made up of multiple individual particles in different locations and are subject to a variety of impulses in the way they move.

Waves also cause interference. Quanta can take on the properties of classic waves as well as those of classic particles, in what is known as wave-particle duality.

...in the quantum world, there are concepts that defy the laws of conventional physics and are difficult to grasp?

For example, in a day-to-day understanding of such things, it is hard to comprehend how one and the same particle can be in two different places at the same time.

Or how two particles can interact with one another over any distance whatsoever, without us being able to measure a power relation between them.
One of the particular features of quantum physics is that it is impossible to determine either a precise position or a precise direction of movement for the unobservable quanta.

...quanta, according to microscopic physics, are variables that are only able to take on specific, discrete values rather than any arbitrary value?
These include, for example, energy and angular momentum.

The term quanta is often used to describe objects such as atoms or electrons to which the theories of quantum physics apply, in other words which demonstrate the phenomena of superposition and entanglement.

...Superposition in the case of quanta means that they are in a state in which several properties, which are normally mutually exclusive, overlap each other, as it were? An elementary particle can therefore, for example, be superposed from several different locations.

In other words, although the particle is not definitively located in any one place, a locational measurement will identify its potential presence at one or the other location with a certain degree of probability.

...entanglement is a concept whereby two quantum objects lose their individual character to the point where the properties of the one depend upon those of the other?

An action undertaken on the one object has an immediate impact on the other object. This dependency is effective over any distance and does not require any known physical transmission medium.

...qubits are microscopic quantum systems that encompass two different basic states? These correspond to the 0 and 1 of the conventional bit. These quantum systems exhibit the typical quantum characteristics of superposition or entanglement.

As with conventional bits, there are various ways of creating qubits, for example with the aid of photons, electrons, atoms or so-called superconducting resonant circuits.

The aim is to achieve a high level of stability for the qubits over time (known as coherence time), in order to be able to perform as many operations as possible before the stored information deteriorates as a consequence of interaction with the environment.

Current development is also focused on achieving a high level of precision (= low error rate) or a good rate of error correction.

...we should envisage a qubit as rather like the surface of the Earth? If we see the north pole as '0' and the south pole as '1', a qubit also features all the other points on the Earth's surface, while a conventional bit only has the north and south poles.

...trying to find the way out of a maze represents a good illustration of the different ways in which supercomputers and quantum computers work? A computer today checks all the exits serially, until it finds the right one. A quantum computer would search all possible routes in parallel and produce the result of the correct route far more quickly. Some types of calculation can thus be significantly sped up in this way.

...a quantum computer is nevertheless not in every case better than one of today's supercomputers? A quantum computer can process exactly the same problems as a conventional computer. But it will not always be better at doing so.

A quantum computer is better in cases where it needs to complete computational tasks within an acceptable time-frame, for which the conventional computer would need an unacceptably long time or require such vast storage capacity that it would be physically impossible to complete, as can occur, for example, in quantum chemistry.

The preliminary work and reworking of the data required on conventional computers also needs to be taken into account.

...it is possible to check whether a quantum computer has completed the calculation correctly, even if these calculations are no longer comprehensible for supercomputers?

It is possible to use the quantum computer to process smaller problems that can also be handled by conventional supercomputers, and to compare the results.

Some problems with calculation, furthermore, are such that although it is very difficult to reach a solution, it is on the other hand very easy to check whether the suggested solution is correct.

The results produced by the quantum computer can then be relatively easily checked. Much the same is true when it comes to optimisation issues: If the quantum computer suggests a solution, it is possible to check how good it is by comparing it with the solution suggested by the conventional computer.
However, in the case of more major calculation problems, the conventional computer can only deliver approximate solutions based on the best traditional algorithms available.

It is conceivable that, in the foreseeable future, it will be possible to compare or reconcile the results with those from a quantum computer of the same type or even of a different type.