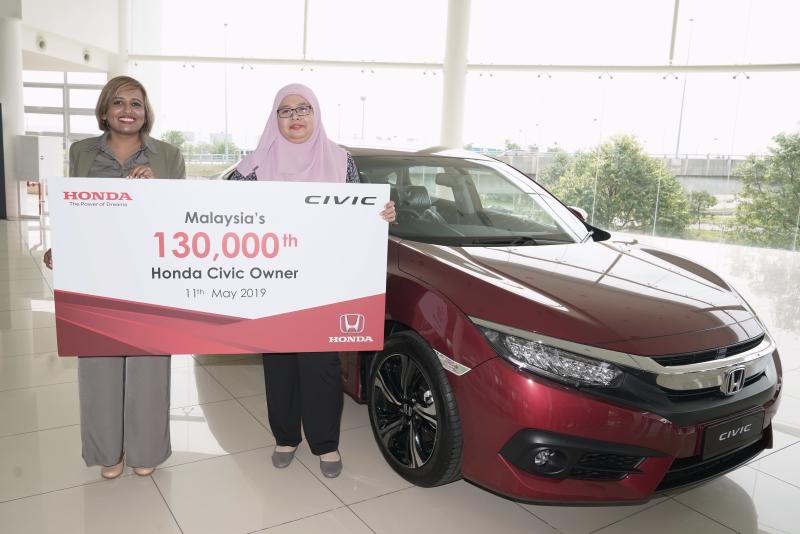 PETALING JAYA: Honda Malaysia recorded a historical milestone with the delivery of the 130,000th Civic to its owner, Fatihah Abdul Kadir.

The 130,000th Civic is a 1.5L VTEC Turbocharged Premium variant in Dark Ruby Red colour, which was delivered to Fatihah at the Honda’s dealership, Botanic Auto Mall Sdn. Bhd.

“I have always been a fan of Honda. Before purchasing this Civic, I previously owned a Honda Stream. I was impressed with the premium and innovative features in the Civic that added more fun to my daily commute. I booked the car early this year and have been waiting expectantly to receive the car.

"To become the 130,000 th Civic owner is really a pleasant surprise! I am truly delighted with my Civic and can’t wait to bring it on-the road,” said Fatihah at the ceremony to receive her new car.

This impressive achievement was an accumulation of Civic sales since the 7th generation was introduced in Malaysia in year 2001.

The 10th generation Civic launched in 2016, which is also the first generation to be powered by a turbocharged engine, is currently the most sought after model, having sold more than 42,200 units.

Honda Malaysia Group Vice President, Jahabarnisa Haja Mohideen said at the handover ceremony, “A heartfelt thank you and deep appreciation to all our 130,000 Civic customers in Malaysia. Their support and belief in the Honda brand have enabled our models to achieve segment leadership positions including the Civic which is leading the C-segment."

In this holy month of Ramadan, Honda is rewarding all new customers with special rewards worth up to RM5,000 in the “Enjoy the Special Gifts of Ramadan” campaign. The promotion begins on May 1, 2019 and ends on May 31, 2019.