The first Moto Guzzi motorcycle was built in 1921 by three Italians after World War I. During that year, Moto Guzzi’s engine was known as having modern technologies compared with its rivals.

Till today Moto Guzzi is still making motorcycles from all Italian parts in Mandello del Lario unlike other manufacturers who source their components from all over the world.

The minute I received a call asking me if I would like to review the Guzzi V7 III Racer, my answer was yes, and I was at Gasket Alley (home of Moto Guzzi Malaysia), Petaling Jaya in 10 minutes. 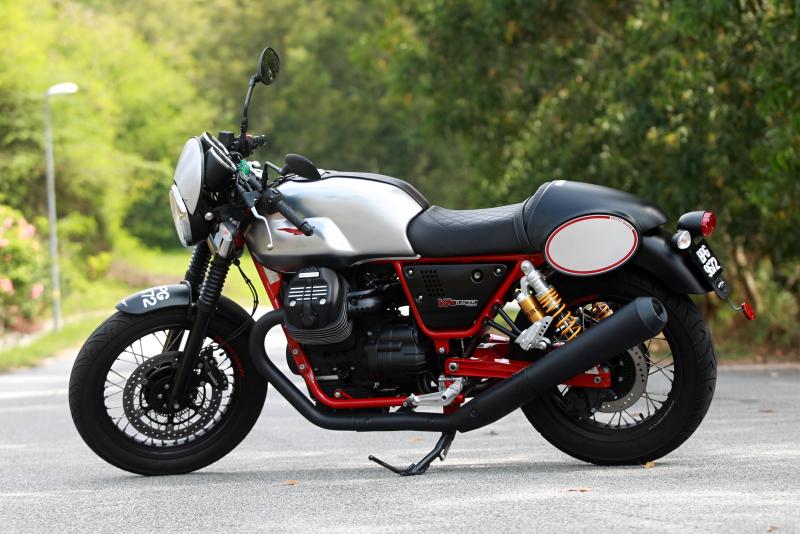 I drove the car tearing the highway and in no time, I was riding the V7 III Racer. What a feeling!

Even though this model is called V7 III Racer, the unit is far from a race machine.

It is not a racer but rather a bike that is designed to look like a racer but the DNA is much more tamed. As the name states, the V7 III Racer is the third generation of the V7 model. Moto Guzzi produced the first V7 in 1967. The retro design of the bike comes with single saddle, mini fairing, rear seat cowl, lowered handle bar and not to forget the 70’s inspired racer number plate just above the rear tyre.  This bike is a head turner everywhere I stop. Very nice! I dare to say; that this is one of those few prettiest retro-styled motorcycles available in Malaysia now.

But does this machine perform as sweet as it looks? Take a ride with me and will give you the highs and lows of this Italian machine. The saddle is short but wide and yet firm.

So, doing long distance on this bike will not hurt anybody’s rear end. The sitting position on this bike is very comfortable. Furthermore, the handle bars allowed me to sit in a less aggressive racing posture without any pain to my neck and wrists. The low handlebars are the trademark of any cafe racer. The foot pegs are ideally located.

The minute I cranked up the engine, the V7III comes to life with a soft noise but slowly building into a pleasant louder note.
While starting the bike I could feel a light pull from the right engine as the air-cooled V twins picks up pace. There is so much of enthusiasm on this transversal V-twin engine when it is alive. 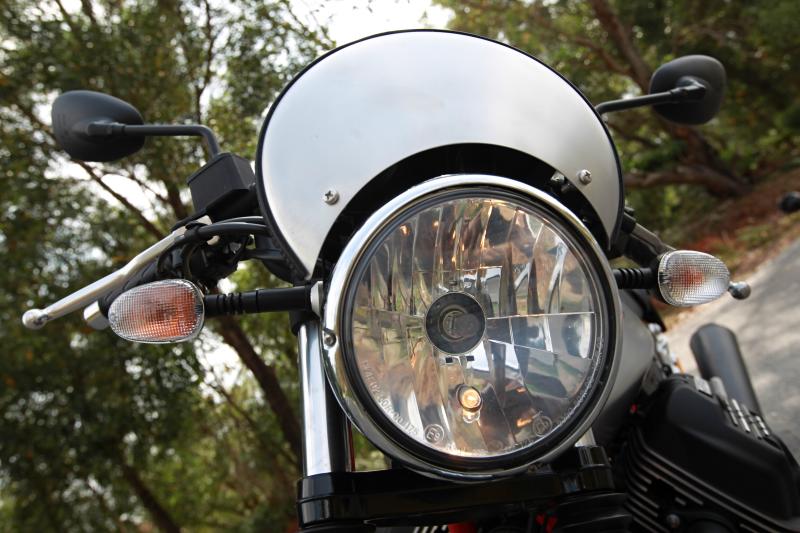 After 10 minutes on the road, I could feel the gradual power build-up on this machine. The powerband is wide thus abundance of power at my disposal. The change of gear is instantaneous and there is no lag in power every time I decide to change gears. The gearings are smooth, and the clutch is extremely light on the fingers.

I decided to ride this bike at Kuala Klawang which is well known for the never-ending corners and twisties in all shapes and sizes plus enough straight road to burn some rubber. On the highway I brought V7 III Racer to 3,000rpm, traveling at 100kph and immediately revved up to 5,000rpm and 6,000rpm. At this point I could feel the gentle surge of the power.

Feeling free spirited I decided to push it above the legal speed limit on fifth gear. However, at that speed, my head started to move aimlessly. The headshake can be resolved if the windshield was bit more taller. The V7 III Racer’s engine sweet spot is between 2,500 and3,000rpm and it is smooth as it can be. Once I brought the rev over 3,000rpm, there were no vibrations felt and smooth acceleration to the 6,000rpm.

The 60Nm of torque on this bike is well complemented by the 52hp which was able to offer me the speed that I needed every time I twist the throttle. The cruising experience on the bike was pleasant. There were no surprises except for few ducks crossing the road in Kuala Klawang, Negeri Sembilan.

The V7 III Racer is born to take mid-corner dive ins. This is partly due to the light weight of the bike and the light front which allowed me to steer in with ease. I tackled few sharp corners where the entry and exit were flawless, I was able to hold my line on this bike even on few imperfect corners. The V7 III Racer is not only agile in the corners, it is also stable.

The rear and front shocks plus the sturdy chassis played an important role in all the corners I took. Few reviews claimed that the older Guzzis don’t do a good job in the corners. I am unable to verify this. However, the V7 III Racer did not disappoint me at all. The first few corners were not perfect as I was trying to learn and understand the geometry of the bike and the response of the chassis and suspension, but after that I got a good understanding of what the V7 III Racer can do. Meanwhile in the city centre, this machine does very well in low rpms. The ride is smooth in stop-go environment. I was so happy that I could whizz in and out of traffic without much effort.

The slim and light design of the bike; makes it an ideal sexy café racer to commute to work in style. The Brembo brakes are without a doubt extremely capable in stopping the bike at any speed. The rear 260mm discs has a two-piston calliper. Meanwhile the front is a single 320mm front disc with four-piston Brembo calliper and not to forget the anti-lock braking system (ABS). Besides the ABS system, there is the new adjustable Moto Guzzi Traction Control (MGCT) system that can also be disabled.

The former prevents the wheels from locking up during hard, whereas the latter is a system that prevents rear wheel spin in acceleration. The new MGCT system is adjustable to two levels, firstly on wet or slippery road and the other is designed to cater to the thrill of riding on dry roads.

The V7 III Racer, priced at RM65,700 (without SST), keeps the stylistic personality of the original V7 intact, characterized by a design inspired by Moto Guzzi heritage and modern motorcycle requirements; while showing off Guzzis one of a kind engine design which is the transversal V-twin engine.

By the way, to celebrate the V7 Series’ 50th anniversary last year, Moto Guzzi has produced only 750 units of the V7 limited edition ‘Anniversario’ model. You better hurry up if you are keen to own this collector’s item.