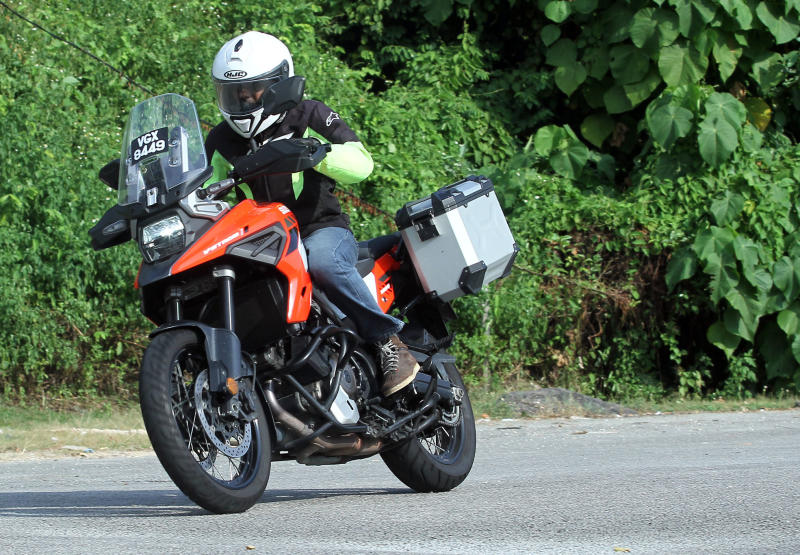 THE Suzuki V-Strom 1050XT was launched early this year and the response has been overwhelming.

I was informed by Suzuki headquarters in Shah Alam, Selangor that the waiting period now is at least four to six months.

Dealers are waiting for the arrival of the new stock.

When I was asked to review the bike recently, I could not say no. 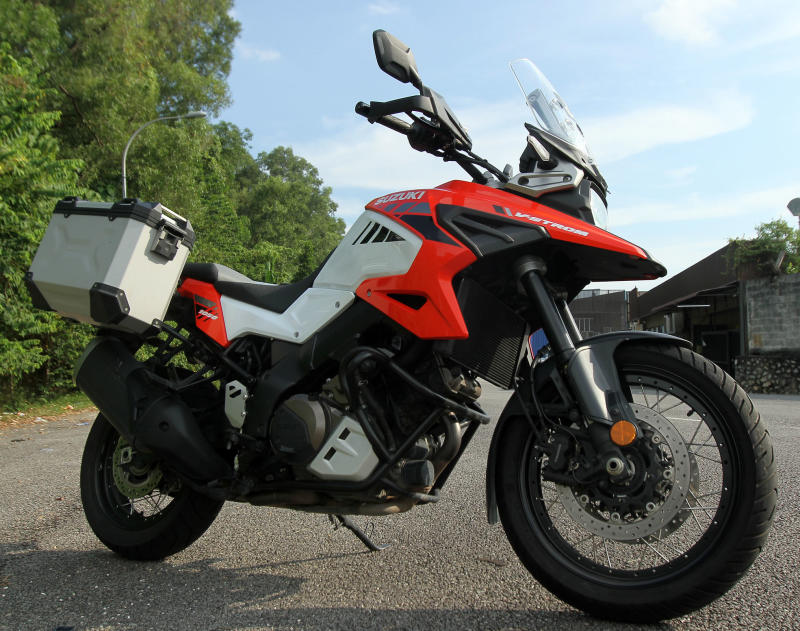 I am dying to find out the performance of the bike.

The design of the V-Strom 1050XT, has been strongly influenced from Suzuki’s iconic DR-Z prototype and the production of the DR-BIG model. 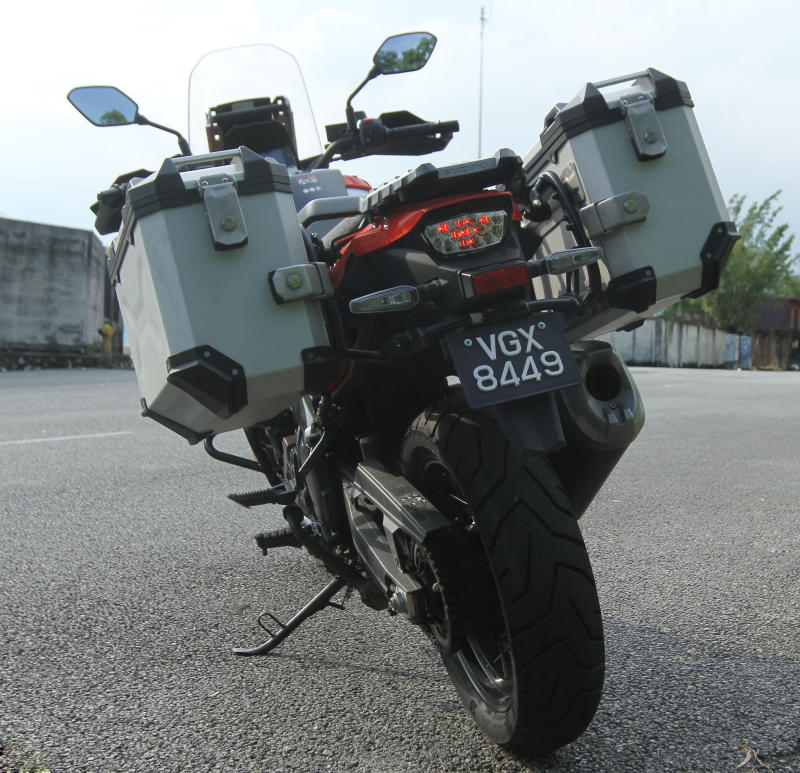 The V-Strom comes with Suzuki’s iconic front beak that gives the bike a much more aggressive look.

The unit I reviewed came in orange and white.

I will be the first to admit that this is not the best-looking adventure bike, neither it is an ugly machine.

The ergonomics of the bike are perfect. 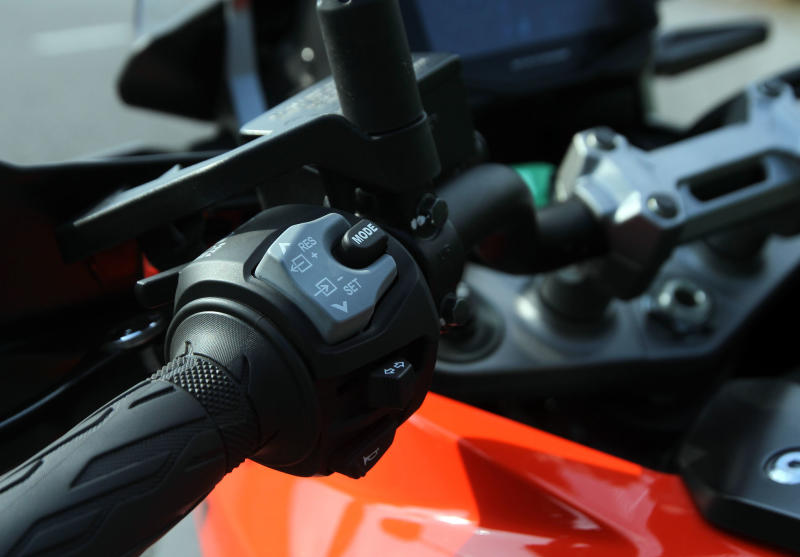 The sitting position and the reach to the handle is comfortable.

Even while standing on the foot pegs when transversing dirt tracks, I did not have to bend myself too much to get that sweet spot.

The saddle was firm and yet comfortable for long rides.

The build quality of this bike is superior and nothing looks cheap. 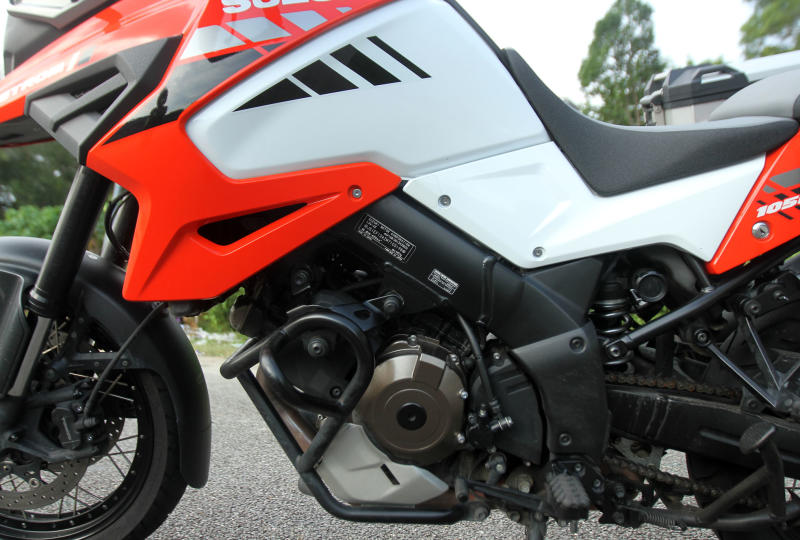 Every design on the bike is practical and at the same time enhances the aesthetic of the bike.

The hand guards are big enough to deflect wind, rain and occasional pebbles flung up while riding in the rubber estates. 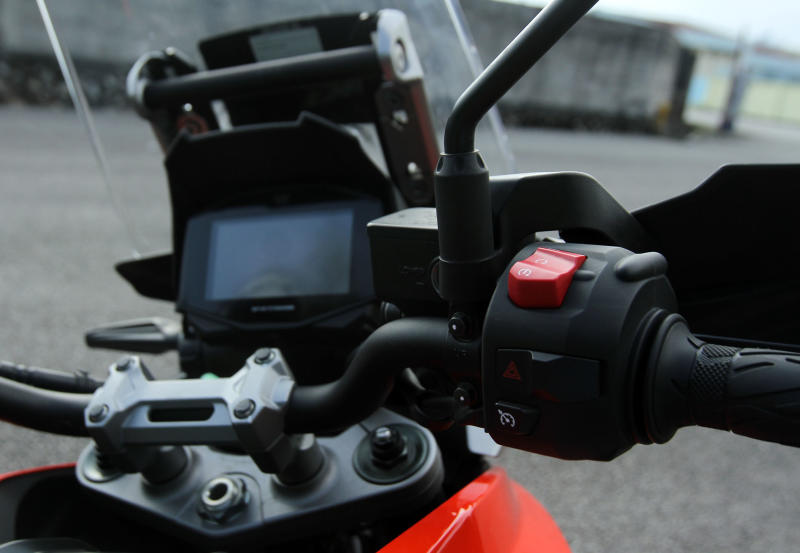 Like any other adventure bike, an LCD screen is a crucial tool to display all the necessary information to a rider.

The layout on the screen was simple and the information is legible even on a hot sunny day.

I was able to change the riding mode and also the menu through the rocker switch placed on the leftside handlebar control.

Any new owner of this machine can learn this within 30 minutes. 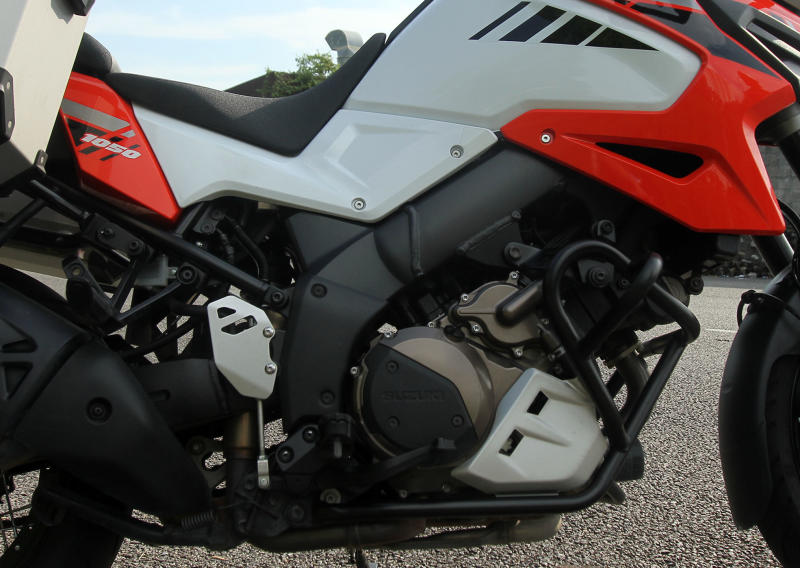 The model might not be the fastest dual-purpose bike but I can assure you, that any seasoned rider will enjoy this bike.

The bike comes with decent torque and horsepower that can do what a dual-purpose bike should do.

While riding on the highway to Ipoh clocking triple-digit speeds, I realised that the bike has a rock-steady and vibration-free ride despite encountering a crosswinds.

The bike was cruising effortlessly on the North-South Expressway. 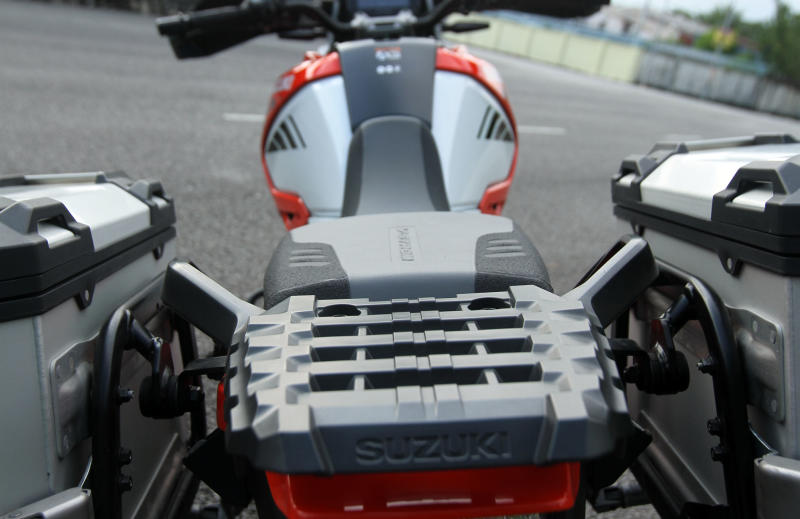 At high speeds, the windscreen deflected on-rushing wind from hitting my head.

The windscreen height cannot be adjusted while on the go.

I had to stop twice to adjust the height of the windscreen which I found to be cumbersome.

Meanwhile, the front suspension is the spring preload and compression/rebound damping of the KYB inverted front forks that can be fully adjusted, allowing the suspension to be set based on the preference of the rider or the usage conditions. 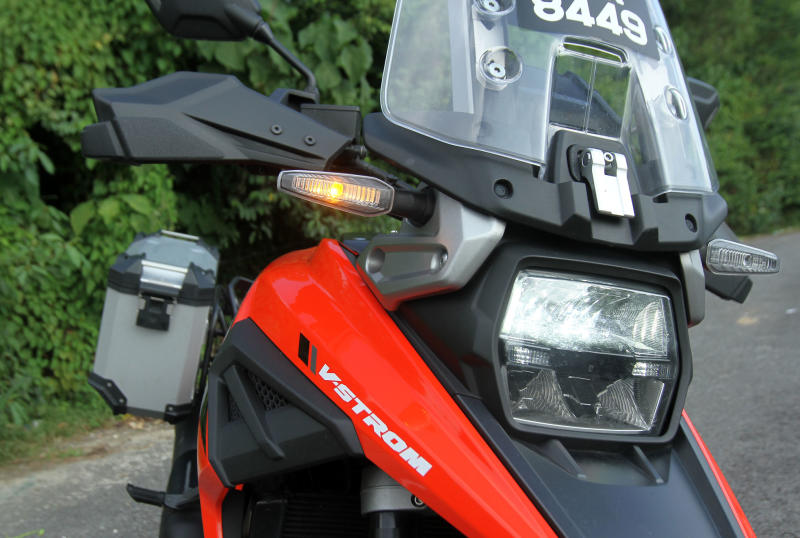 The rear suspension is a bottom link type mono-shock, and the preload can be adjusted simply by turning the easy access dial by hand.

The front Tokico brake calipers come with two 310mm floating discs that are made from stainless steel. 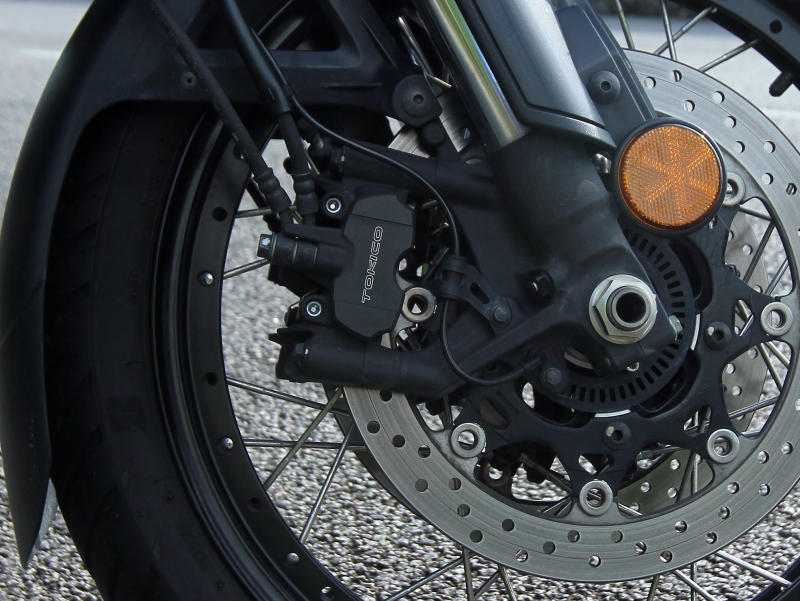 Meanwhile, the rear brake has a 38mm single-piston caliper with a 260mm disc.

While riding in the traffic, the riding experience was pleasant.

The bike did well at lower rev range without any hint of engine stalling while being able to scoot off quickly to the next traffic light.

What is even more important, unlike many other adventure bikes, is the V-STrom 1050XT's slim design that allowed me to zig-zag through the traffic.

However, I do find the side panniers increased the width of the bike a bit wider than the handlebar, and hence I had to be mindful when squeezing between cars. 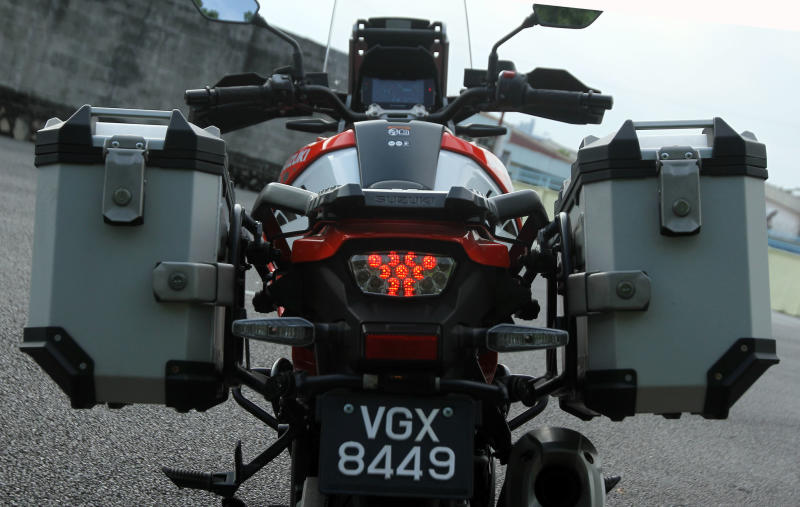 The ideal width should be the same or less than the handlebar.

Besides being perfect for highways and city rides, this motorcycle is comfortable in taking any corners and twisties without sacrificing any riding pleasure.

I pushed the bike hard on few corners while going up Fraser's Hill and the bike had good ground clearance to avoid its body scraping the road.

I was able to hold my line while entering and exiting the corners. 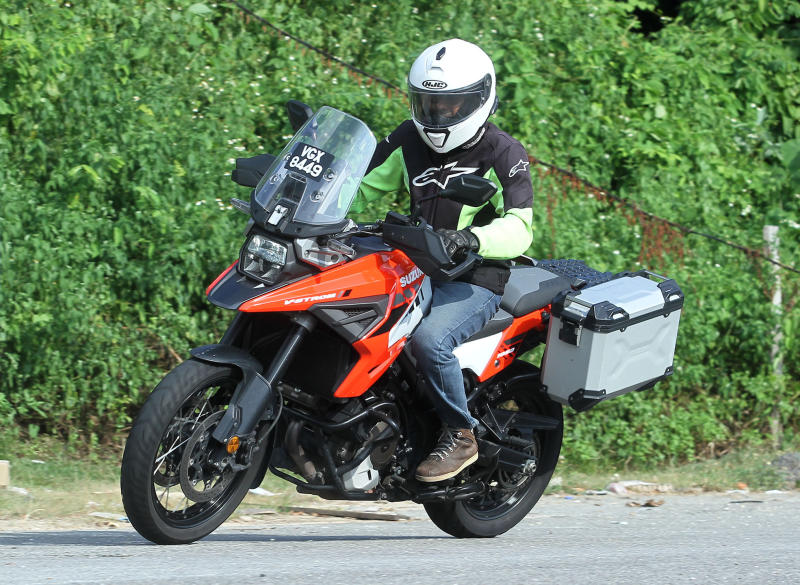 What is even amazing, I was able to flick the V-Strom 1050XT like a racing bike as it has good suspension and evenly distributed weight.

The agility of the bike and the broad power band gave me so much confidence while riding in the hill.

In conclusion, the RM81,900 V-Strom 1050XT is a simple bike with practical rider aides that promises an enjoyable ride on the highway and a light off-roading.

Built to last, the V-Strom 1050XT lives up to the line-up's reputation as reliable machine.