SPORTS utility vehicles (SUVs), big and small, are getting all the attention these days.

This vehicle design in its various sizes can be found in the entire price-range spectrum and luxury brands too have joined in the chorus especially in the last several years, offering its clientele an SUV option besides the traditional sedan or sports car such brands were originally known for.

Jaguar was among those who offered the mid-sized SUV, the F-Pace, and now the E-Pace, which comes fully-imported and priced at RM403,216 (on-the-road without insurance including sales tax). Even in the luxury segment, it’s a crowded market with plenty of offerings from premium German marques at competitive prices, which may be one of the reasons a Jaguar might be overlooked.

On top of it, Jaguar has to contend with Land Rover models as both brands are owned by Tata Motors and exclusively distributed locally by Jaguar Land Rover (Malaysia).

While it is almost certain that Jaguars are elusive automotive creatures in Malaysia, it should be on one’s checklist nonetheless.

No harm in taking some time for a test drive and, in doing so, find oneself pleasantly surprised to what Jaguar has to offer. And one can start at its most affordable offering, the E-Pace.

There is no denying how good-looking this vehicle is.

One look at the E-Pace and you will immediately notice its muscular stance with its feline composure along its body length.

Its broad grille in black complements the circular Jaguar logo with its ferocious chrome cat head on a field of red. Overall, the E-Pace has a sleek appearance which exudes style and flair without screaming for attention.

Step inside the cabin and you’re greeted with a luxurious black interior wrapped in quality leather including the steering wheel.

The dashboard design is uncluttered and the Touch Pro infotainment unit with a 10-inch touchscreen is at the centre of attention followed by the three dials for climate control below.

The instrument cluster has analogue displays for speed and rpm with a digital display in the middle. As such, it retains a mechanical-like charm while other luxury offerings have adopted full digital displays.

Being a compact SUV, the cabin’s spaciousness or rather the lack of it, is noticeable but that is to be expected.

It’s not cramped however, it’s just a smaller space and it doesn’t effect rear passengers either as it has decent leg and head room with a wheelbase measuring 2,681mm. What really stands out in this SUV though is the drive.

The E-Pace is powered by an eager 2.0-litre turbocharged engine which produces 200PS and 320Nm of torque paired to a nine-speed automatic transmission.

The E-Pace is athletic and performance oriented compared to its Land Rover counterparts. You only have to nudge the accelerator and it leaps into action.

It is even more evident in Sports mode by pushing the gear lever to the left.

The difference here is that the E-Pace is not built for off-roading unlike the Land Rovers.

If you were to engage the Dynamic mode via the switch next to the gear lever, you will notice the suspension getting stiffer which allows you to take corners faster and flatter. It’s not altogether flat however which may be due to the car’s height and there is some body-roll but otherwise, it provides for an exhilarating driving experience.

What may be holding people back from purchasing this car is probably its price.

However, the E-Pace is one of the better looking luxury compact SUVs around and most people probably don’t realise how much performance one can wring out of it.

Yet it is still an every day driver that is comfortable, quiet and functional which makes the E-Pace well worth a look if you’re thinking about your next luxury compact SUV. 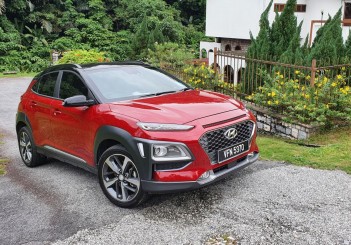