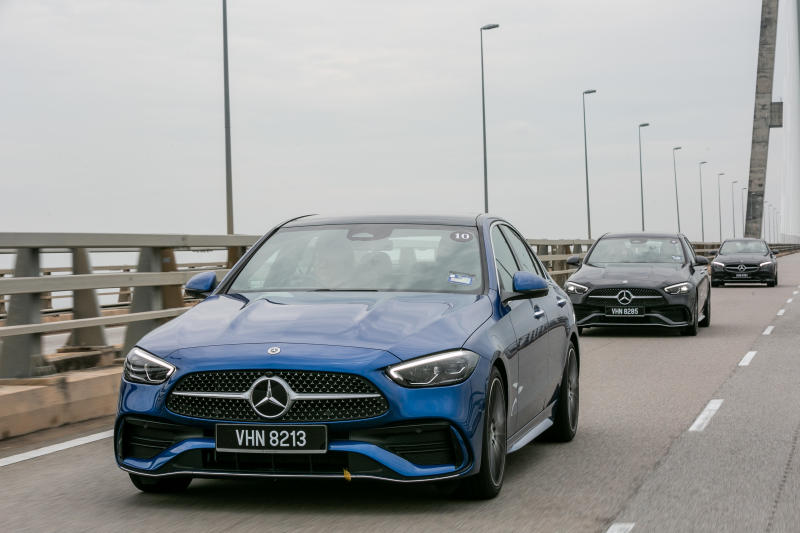 THE latest Mercedes-Benz C-Class is no longer the entry-level premium sedan as that role is taken over rightfully by the A-Class; which is just as well seeing as how the C-Class has grown so dimensionally big that it almost as big as an older generation E-Class.

This newly minted model status is fully endorsed by Mercedes-Benz in its description of the latest C-Class (W206) as a mid-size sedan when highlighting the nameplate’s best-selling status in the last 10 years with global sales exceeding 10.5 million units. 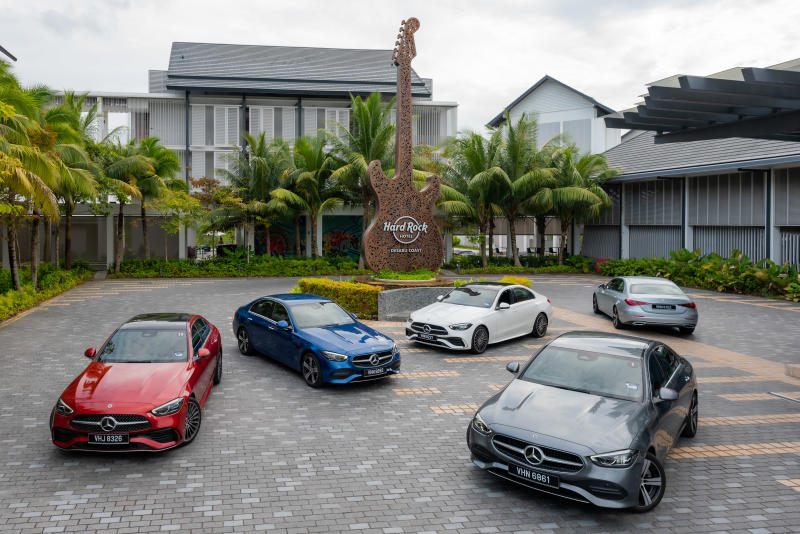 Its step up the ranking ladder is also matched by its inclusion into the hybrid power circle, albeit a mild hybrid, and this encompasses both models; the C 200 Avantgarde Line and C 300 AMG Line.

In engine output, there is plenty to offer given the mild hybrid and turbocharged design, combining to provide a strong lift in power acceleration while adding seamless and low-speed performance to gain good fuel mileage benefits. 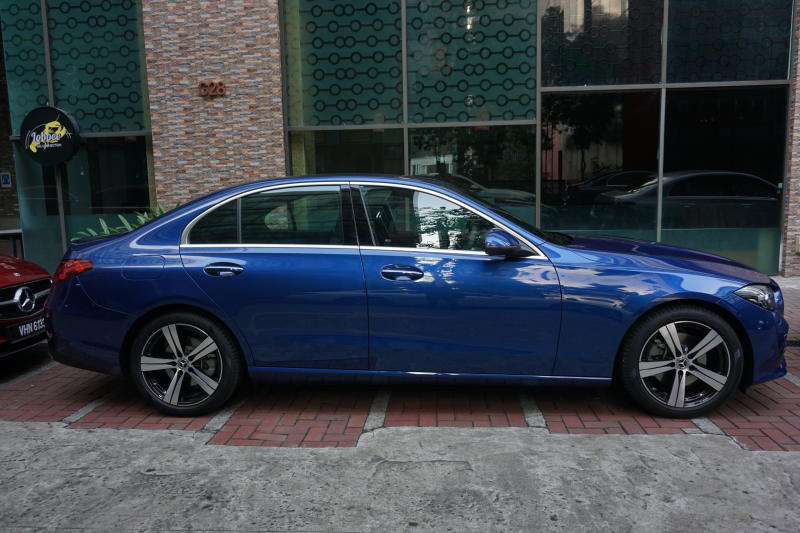 Output figures are understandably impressive; the C 200 gets 204hp and 300Nm from the 1.5-litre engine while the C 300’s 2.0-litre block delivers 258hp and 400Nm. Both engine are the four-cylinder cylinder type.

Adding to that is the second-generation starter-generator or motor unit, that delivers an additional 15kW (20hp) and 200Nm that come in useful during hard acceleration. 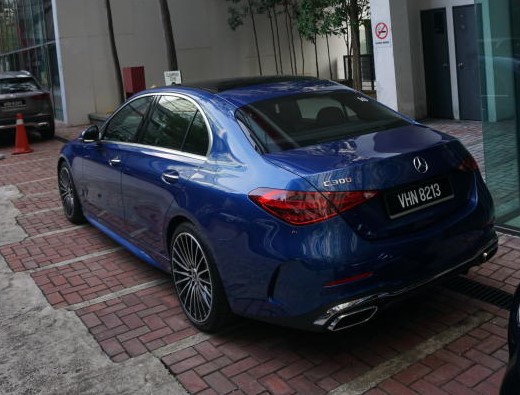 And while we are on a power binge, those eyeing the C 300 might like to know that the turbo system would provide a 20kW (27hp) overboost for a while as you accelerate hard.

We had these power figures in mind when we took off from Empire Damansara for our drive to Desaru, Johor; more so as we started with the better-endowed C 300, power-wise, for the 400km plus journey. 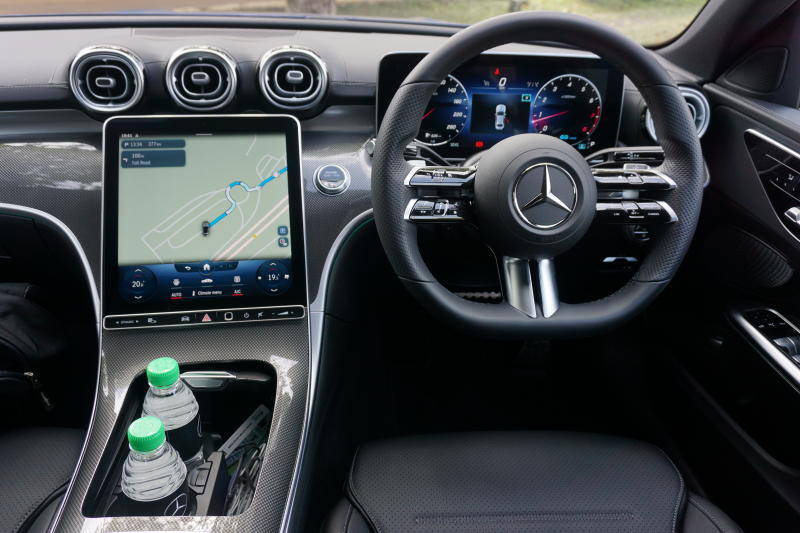 For the most part, we had the engine running at 1,500 to 1,800rpm, which was comparatively low but not unusual given that the transmission is a 9G-Tronic unit with nine speeds!

And if you think we were keeping mainly to legal speed limits, yes, we were with the engine running at 1,500rpm. 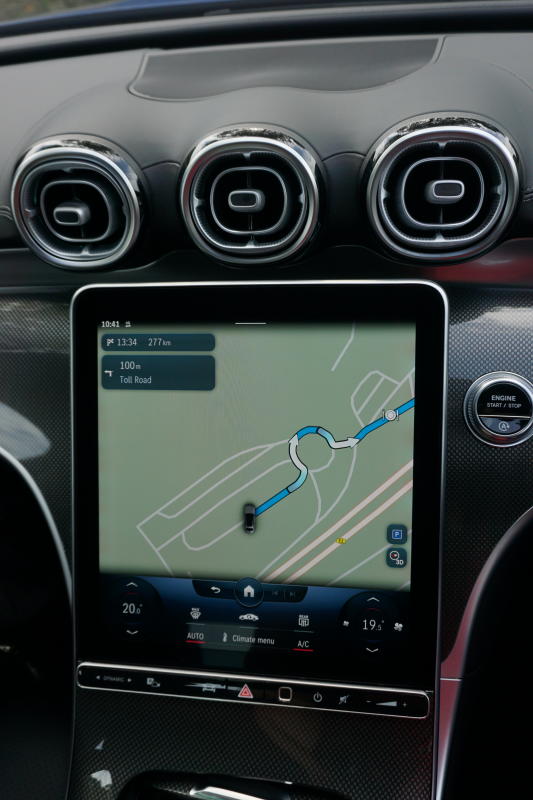 It takes a lot of discipline not to ‘push’ the engine harder past 110kph but the C 300 certainly felt doing 100kph or lower in less premium cars even when it was going much above the legal speed limit.

In fact, it was just the same driving the less powerful C 200 on the return journey the following day; we covered similar road speed within the same engine speed range. 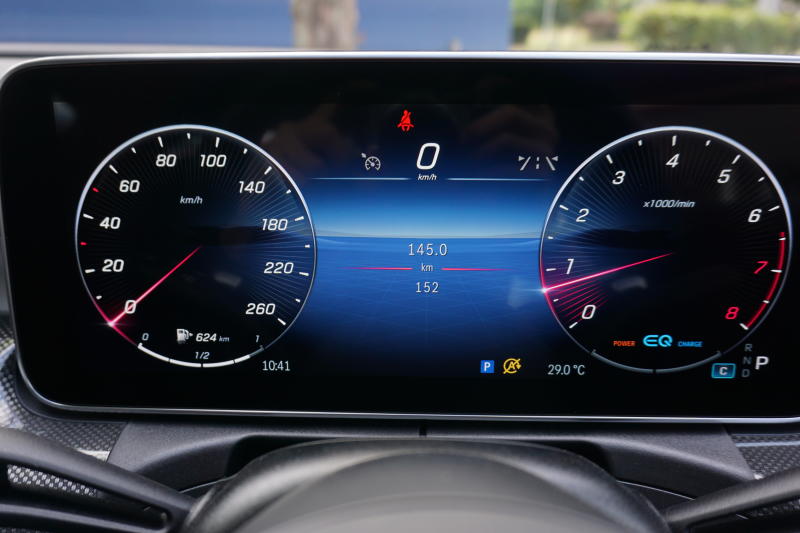 The C 200’s performance belied its small 1.5-litre displacement and if we were to feel any lack of engine pace, it was when we were following cars up an incline on a busy section of the highway. 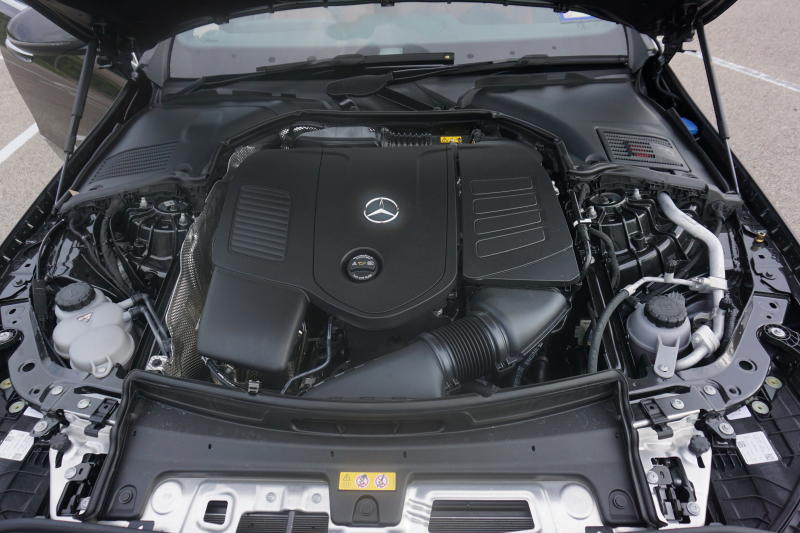 Despite our fairly robust speeds, we were impressed with the mileage as the transmission and engine combined well to give good fuel distances; we still had more than 400km to go based on what was left in the fuel tank (slightly above half for both cars).

The seats were well designed to accommodate our 165cm frame nicely, both in the back or lumbar (four-way) support as well as that for the thighs; we hardly felt fatigue at the end of each drive. 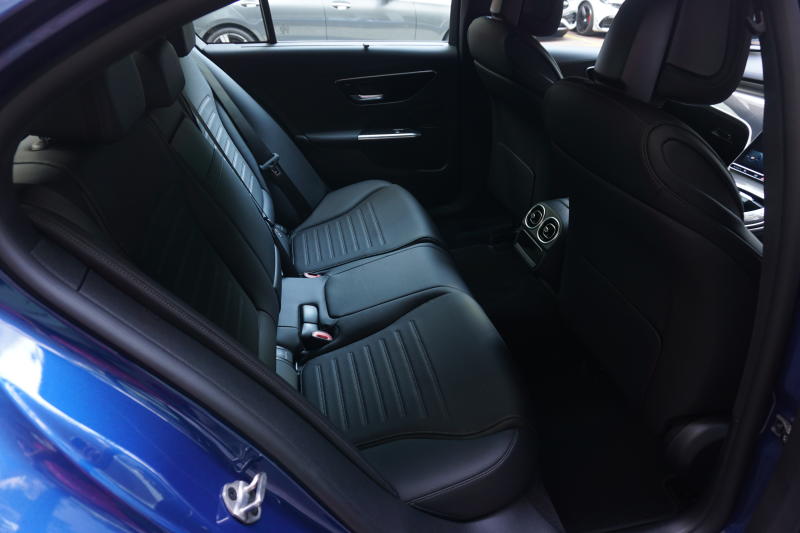 On both occasions, we used the navigational equipment that came standard and we could also select the navigational display for the driver monitor – located between the tachometer and speedometer.

The interior sees a major change from the previous generation with a huge 11.9-inch tabloid size multi-information display heading the centre console where previously a long rectangular unit sat atop the centre dash area. 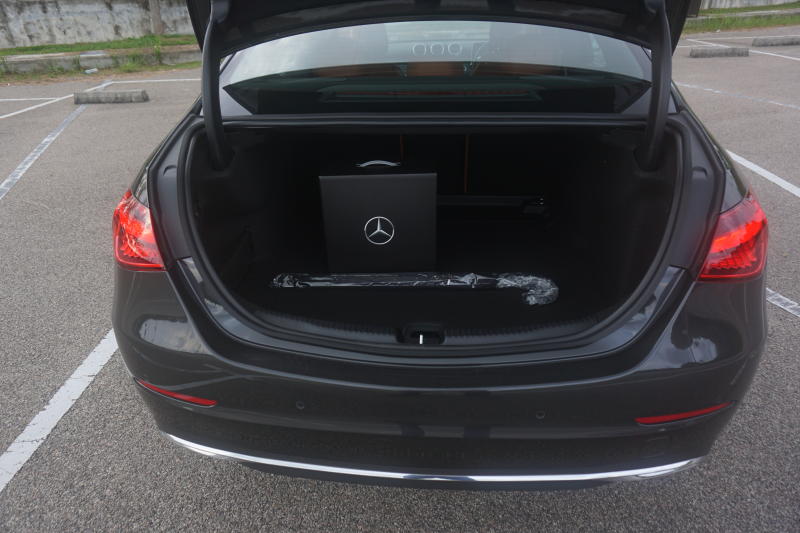 The entirely digital driver display is even bigger being a 12.3-inch unit although it doesn’t look it with its slim rectangular design.

It was also a relatively quiet drive as wind noise was curtailed in all critical areas although at higher speeds, you might hear some rustle around the roof area. 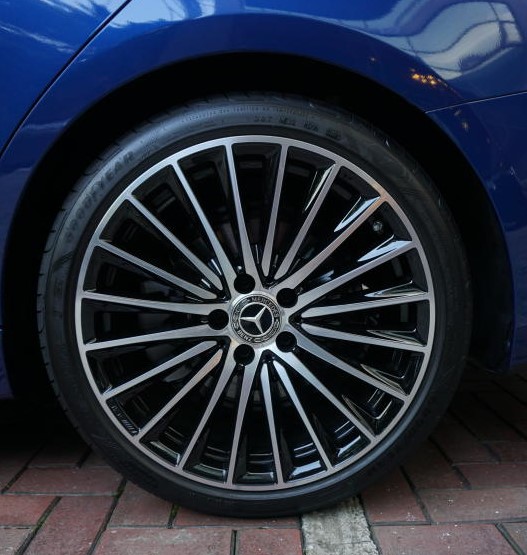 It’s the road noise that impeded some, varying in pitch according to the types of road surfaces but then again, except for one particular highway section that was the loudest, this was easily tolerated as we could still enjoy our music and the navigational advisory.

We didn’t have many areas where we could check out its dynamic quality although we did wander onto a short B-grade road with a few twists and turns with the C 200. 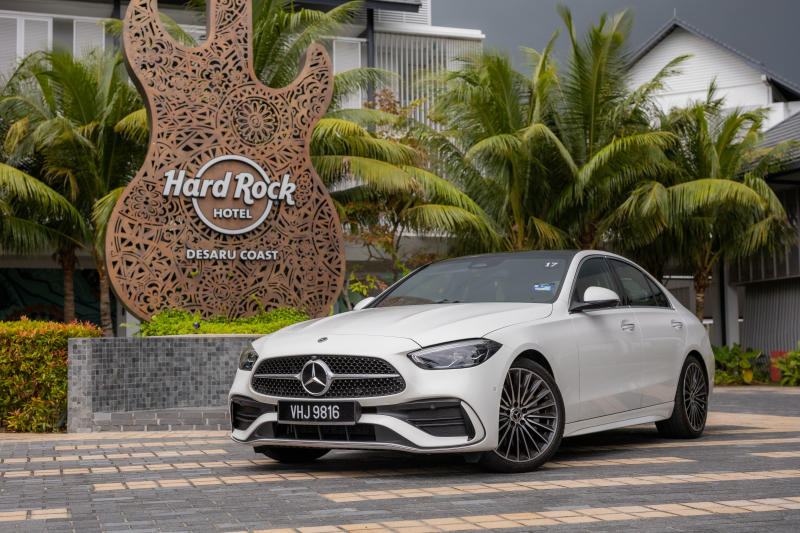 It took the few corners without much of a sweat and both cars felt pretty comfortable and planted on the road along fast sweepers on the highway.

The latest C-Class comes with a full suite of safety and assistant features which includes Active Blind Spot Assist and Active Brake Assist.

Orange lights lit up on either door mirrors when each detected a vehicle in the blind spot area and a red warning light on the driver display panel when we got too close to the vehicle in front (the distance varied based on the road speed). 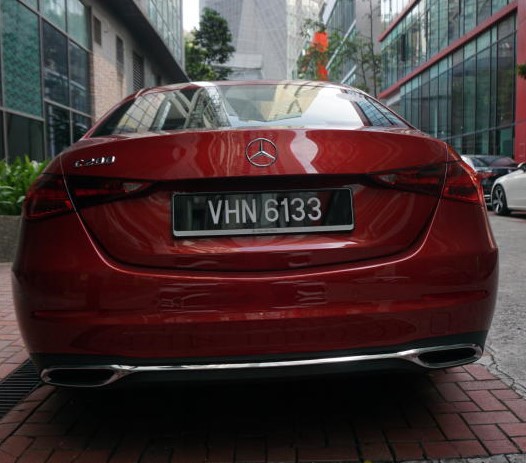 We liked the new look of the C-Class as its styling toed the current family profile – bold three-star logo with wings on the front grille and bumper with a mid upswept section to highlight the underspoiler and central vents.

At the rear, the sharpish triangular combination lamps give a cleaner look while providing a nice symmetrical balance with the rear reflectors and twin chrome exhaust tailpipes. 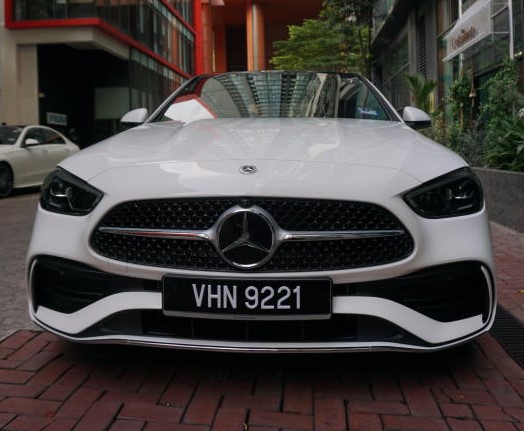 Its higher level of electronic features are persuasive factors to upgrade for existing C-Class owners although its mid-size status might divert younger folks to look at the A-Class sedan instead.

However, the imported range is sold out although cheaper locally assembled (CKD) variants are in the pipeline but you would have wait till the second half of the year to get them.