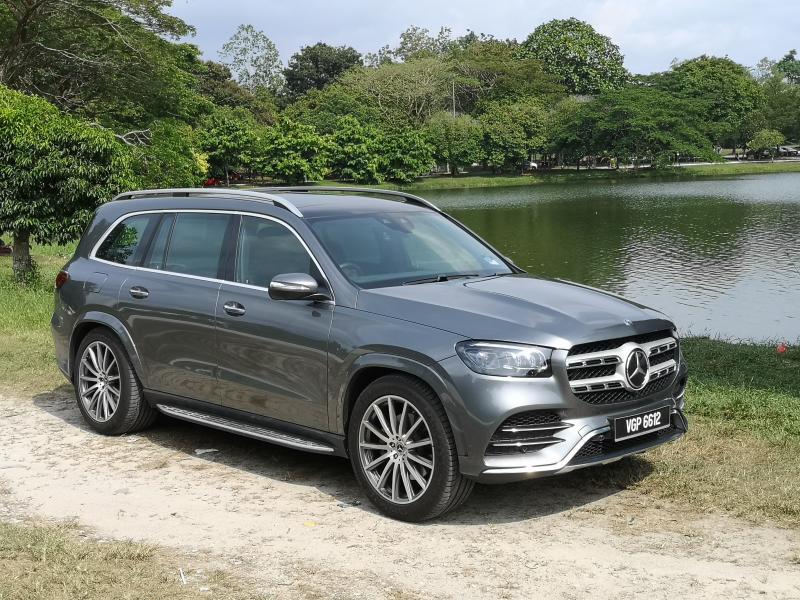 WHILE many sports utility vehicles (SUVs) are often marketed with a full seven-seater capacity, they usually come with a third row that are suitable for children or young adults at best.

As the S-Class flagship of Mercedes-Benz’s SUV line-up, the GLS 450 4Matic (X167) seems to have delivered on such claims. 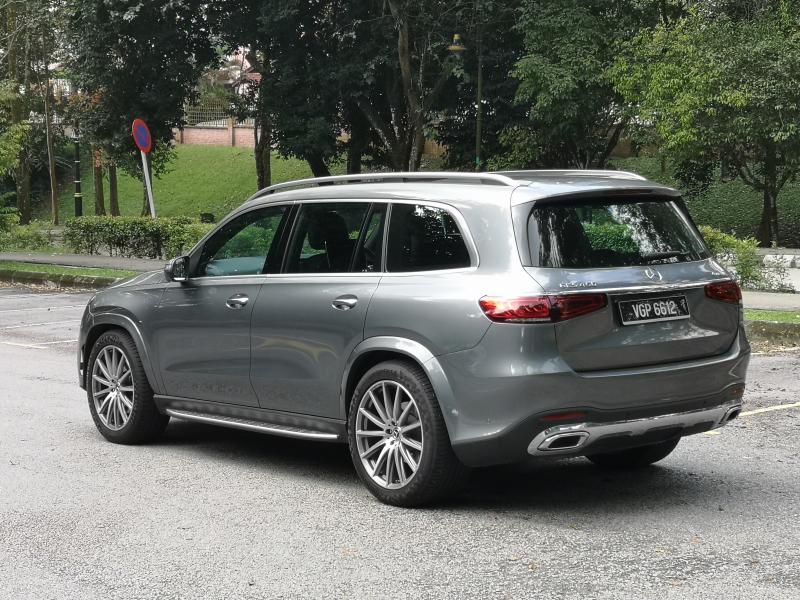 If you had thought that the GLE 450 was already a large vehicle, the GLS 450 trumps it by being 283mm longer for an overall length of 5,207mm in comparison.

Its wheelbase is also stretched by 140mm in comparison and this helps in creating additional interior space for rear passengers and luggage. 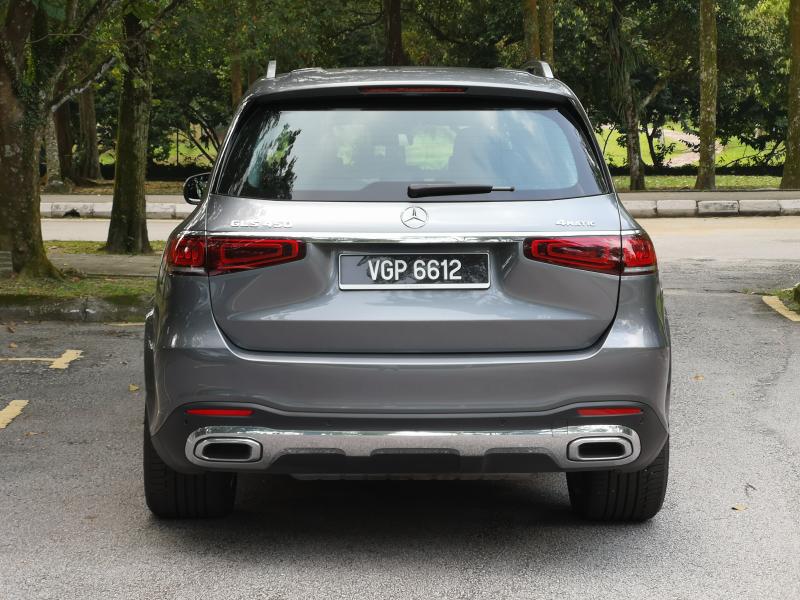 Featuring the traditional rugged two-box SUV styling, the GLS 450 looks sturdy with a strong shoulder line and yet elegant with softened corners.

Its presence is accentuated by a beefy bonnet with two powerdomes, a dual-louvre radiator grille flanked by Multibeam LED headlights and a chrome-plated underguard in the front apron. Generously-sized 22-inch AMG multi-spoke alloy wheels and side running boards with rubber studs add another take to the vehicle’s dimension.

At the rear, aside from the two-piece LED-type lights that come with internal elements to create a 3D effect, there are also generous chrome trimmings. 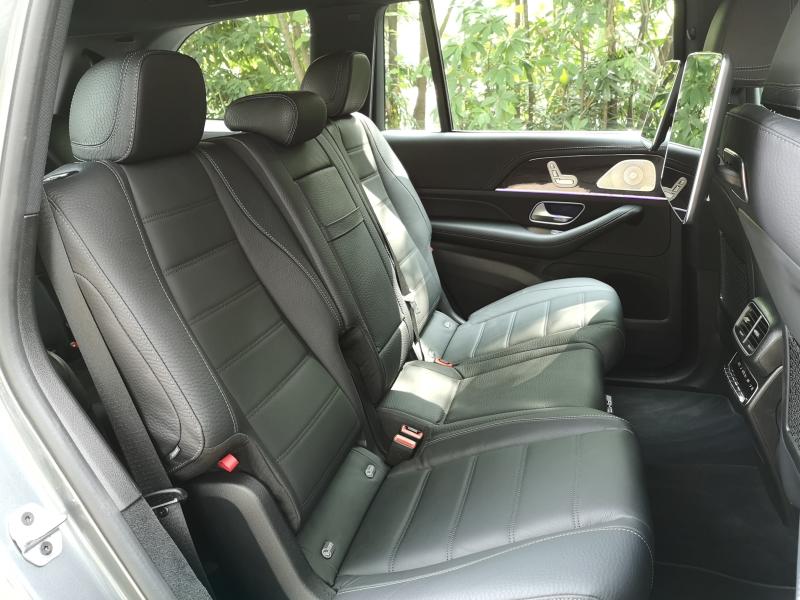 Inside, seating position is high and commanding with ample head, shoulder and leg room.

The premium and solid build quality feel are elevated by a large panoramic sliding sunroof along with Artico leather, high-gloss anthracite lime wood and chrome trimmings. 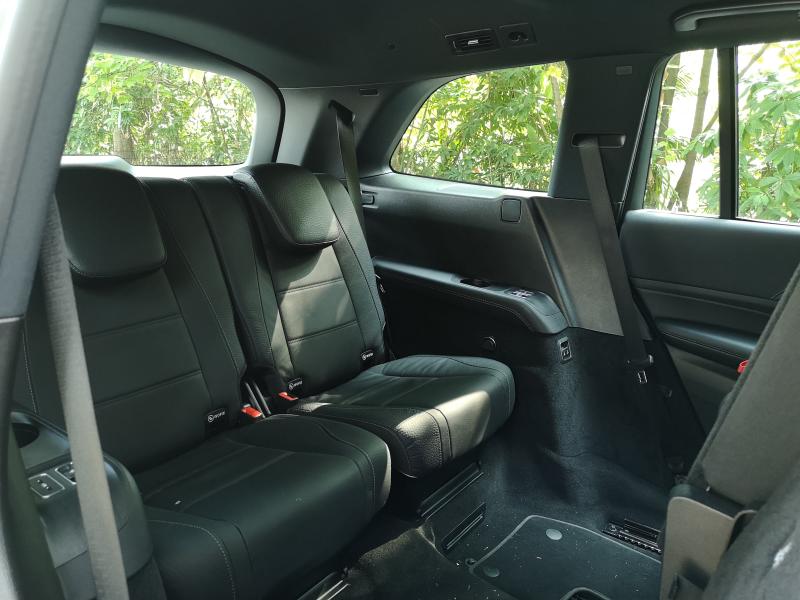 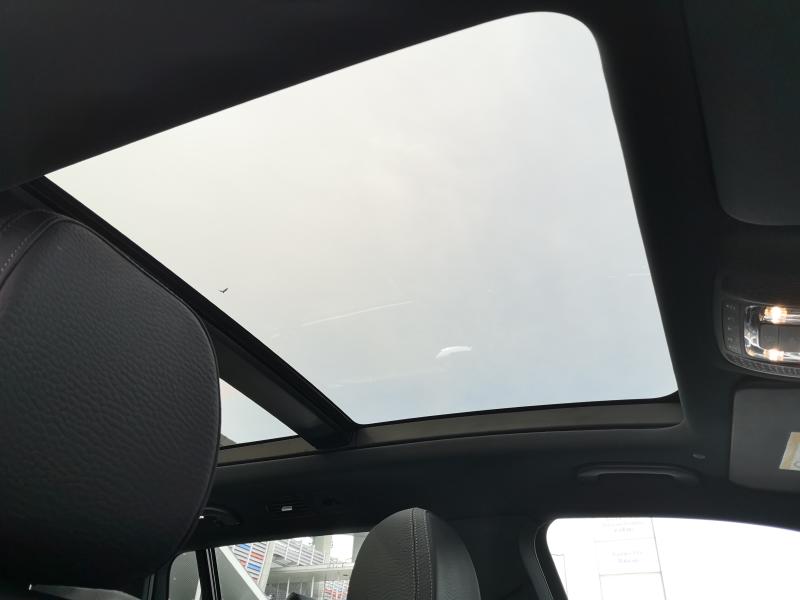 The second row passengers get the MBUX Rear Seat Entertainment system through two 11.6-inch touchscreen displays and wireless headphones to access movies and music or use the integrated web browser.

Just like in the S-Class sedan, the GLS 450 is equipped with a power close feature that gently pulls in and secures doors that were not fully closed. 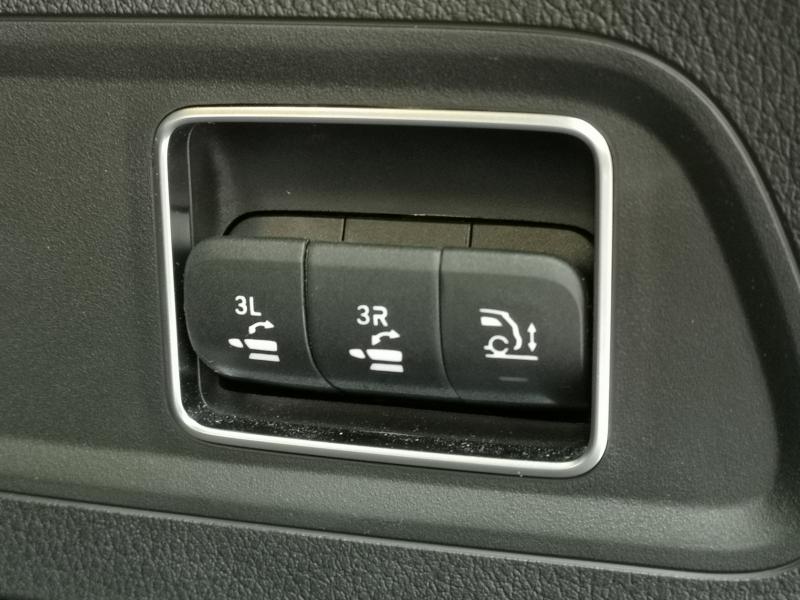 To get into the third row seats, the motorised Easy-Entry package will fold the second row seats and slide them forward to increase access space.

Adults at the third row seats will have an enjoyable ride with ample head and leg room along with their own air conditioner vents, cup holders and USB C-type charging points. Although many vehicles with three rows of seats tend to run out of cargo space once all seats are fully occupied, the GLS 450 still has room for some 470 litres of luggage.

The space can be increased to 2,400 litres once the second and third row seats are folded flat with a switch. Heavy items can be easily loaded onboard by using the GLS 450’s Airmatic suspension to lower the vehicle’s rear section by some 50mm.

For a mountain of a SUV weighing some 2.4-tonnes, the GLS 450 is surprisingly quick and not as ponderous as one might think. 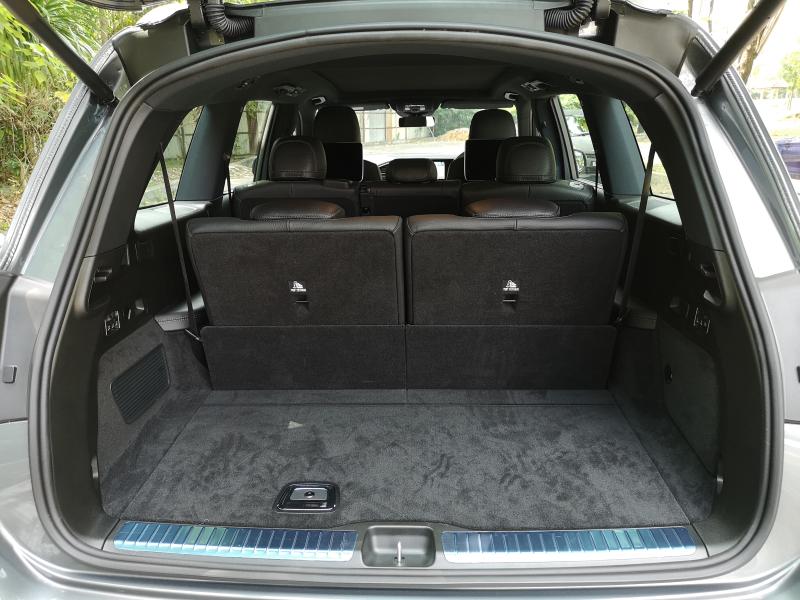 Its 3.0-litre inline six-cylinder turbocharged engine with 367hp and 500Nm of torque comes with a 48-volt electrical system to allow the EQ Boost motor an additional brief push of 22hp and 250Nm of torque.

The result is a dignified engine response and its 0-100kph sprint of 6.2 seconds can easily put many sporty vehicles to shame.

Transmission is the nine-speed 9G-Tronic supplemented by the 4Matic all-wheel drive system.

Even when we were cruising above the legal speed limit on the North South Expressway, the interior remained serene while road and wind noises were kept out. 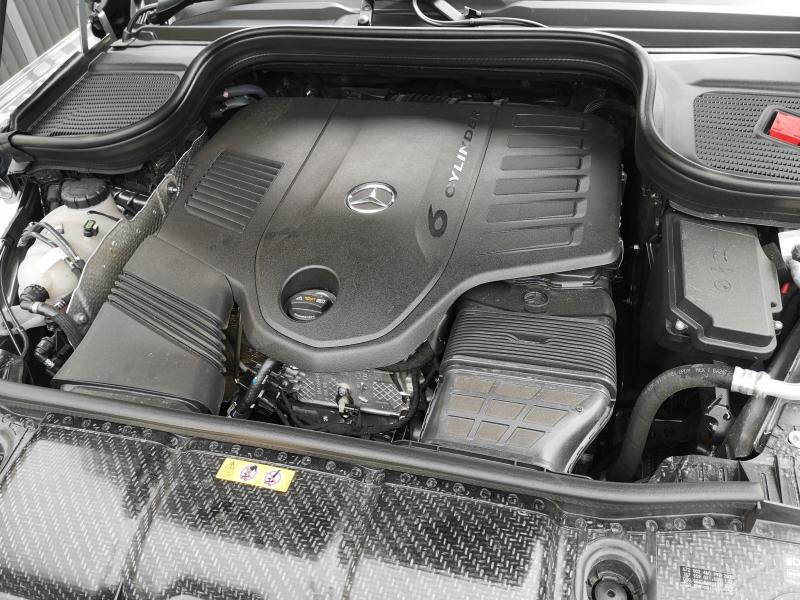 The Airmatic suspension, in addition to providing a premium ride capable of smoothening out rough stretches and potholes, also allows the ride height of the GLS 450 to be raised during off-roading or lowered for better handling and stability at fast highway cruising.

Its Dynamic Select has Individual, Eco, Comfort, Sport and Offroad modes that alters the settings of the throttle, suspension, steering and stability control response to suit the driver’s preferences. 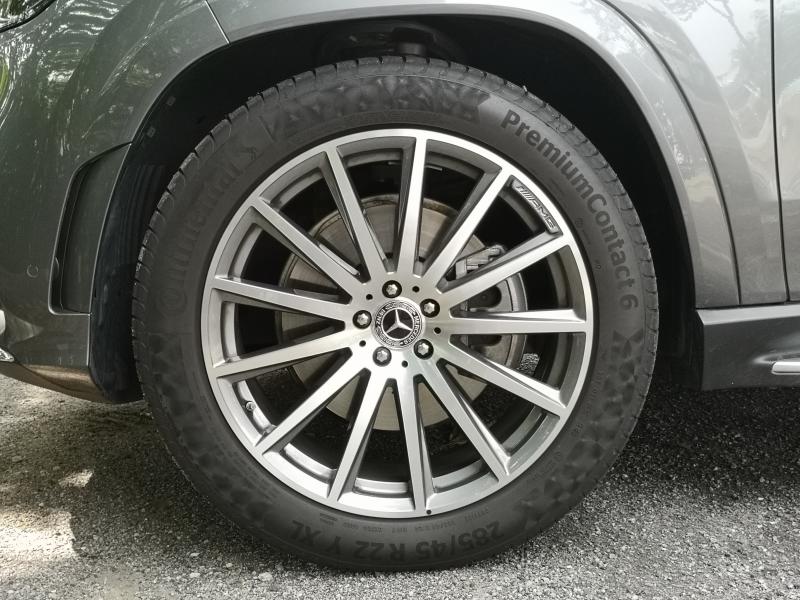 Nevertheless, intended buyers are the well-heeled select few who are willing to fork out extra to get this RM899,888 fully imported luxury SUV where every seat on-board is adult-friendly. 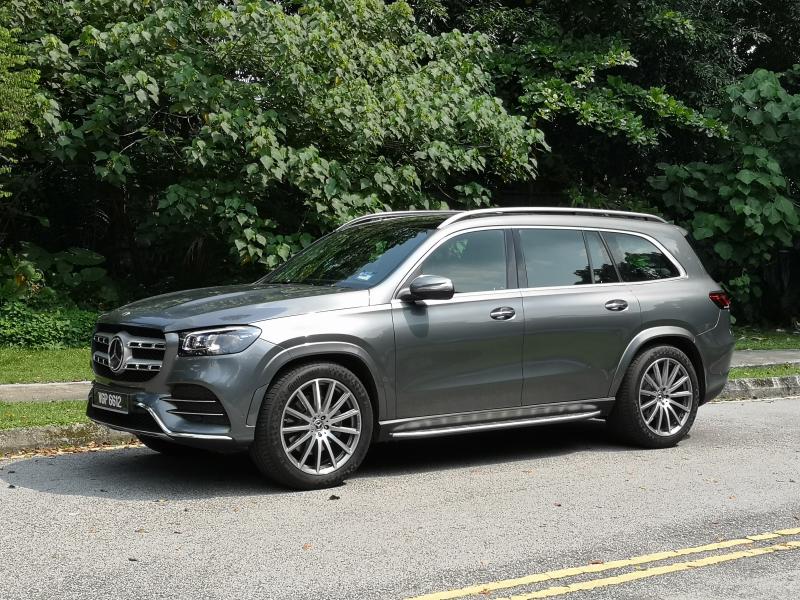