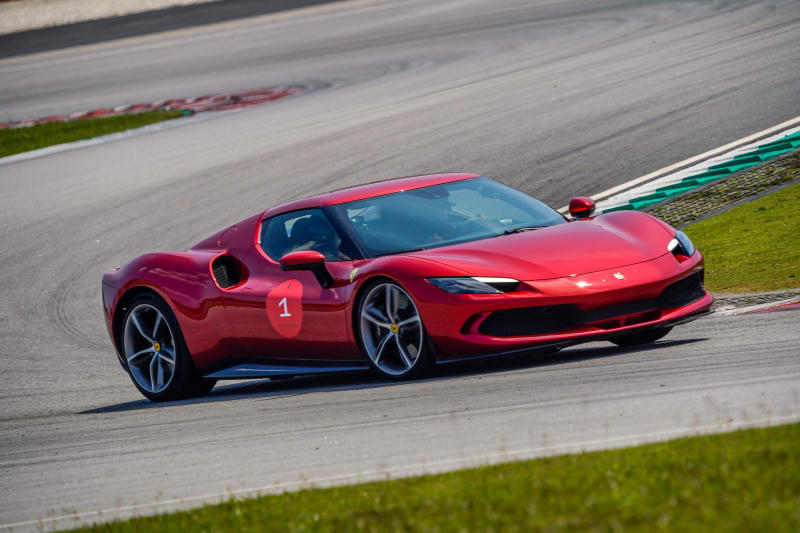 Six laps of an eye-opener. That's how we shall start with when referring to the Ferrari 296 GTB as it shows its moves on the Sepang race track.

The experience last month with the Lamborghini Huracan STO at the same venue was still fresh in our minds. That car itself was impressive enough with its 5.2-litre V10 naturally aspirated engine making 640hp/565Nm.

Along comes this little Ferrari to deliver its interpretation of performance with a seemingly modest powertrain that puts out 818hp/740Nm.

At first glance, it looks like more for less from a smaller albeit turbocharged engine. How is that possible? Electrification is the not-so-secret sauce.

In recent years, electrified cars have proven they not only can cut down on fuel consumption but can pump up performance. Massively.
The 296 launched in Malaysia in late March and three months later, it was time to show its mettle as the third plug-in hybrid (PHEV) model for Ferrari after the even more potent SF90 Stradale and SF90 Spider. 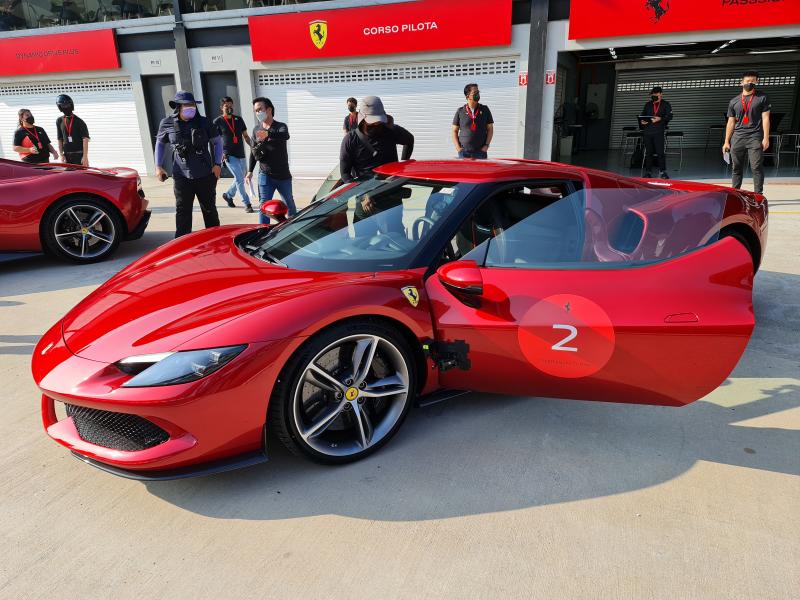 The regional track drive of the 296 saw selected media organisations from Thailand, Singapore, Vietnam and Indonesia flocking to Sepang.
Naza Italia also used the occasion to introduce the 296 GTS, the convertible variant.

Looking back, the 1957 Dino engine that Ferrari built was its first V6 and the forerunner to the modern V6 that you see on this page.
The arrival of this electrified model comes as Ferrari gears up to introduce its first all-electric sports car in 2025.

Described by Ferrari as the most "fun to drive" model, the 296 has a 2,600mm wheelbase and is the shortest wheel-based model in the Ferrari line-up, with a 40.5 %/59.5% front/rear weight distribution. 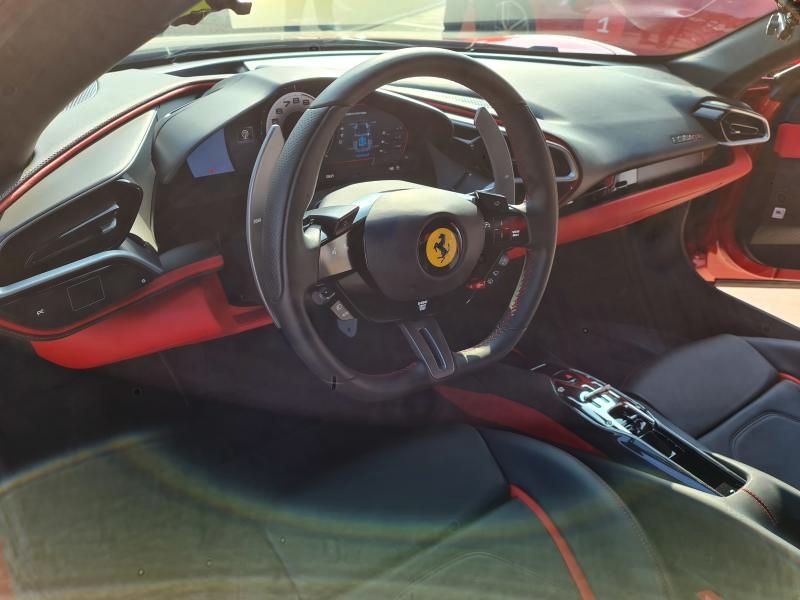 As any Ferrarista will tell you, the 296 refers to the 2.9l engine displacement and the V6 layout, while "GTB" stands for Gran Turismo Berlinetta or a mid-engine coupe.

Ferrari says the RM1.2mil 296 is targeted at car enthusiasts and is also aimed at attracting new customers. For even keener performance on track, the 296 can be ordered with an Assetto Fiorano package that comprises lightweight carbon fibre parts, suspension upgrades and aero mods. 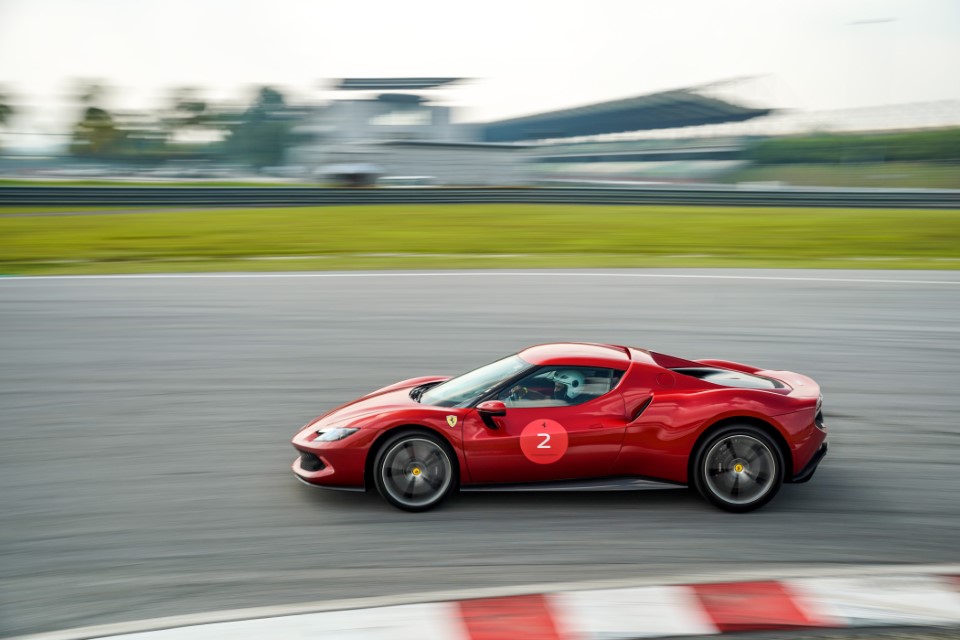 The side view shows off the 296 elegance to great effect. It is characterised by the sinuous muscle of the wings. A clear, strong crease line runs along the doors and melds with the large air intakes positioned at the most aerodynamically efficient point.

The front is clean and extremely compact. The headlights take their inspiration from the “teardrop-shaped" headlights of the past, with the daytime running lights akin to the signature for the front of this car. The central single-grille styling results in a bar-bell shape which hints at the presence of the two powerful radiators. In the central section is a compact suspended wing, reminiscent of solutions adopted in F1. 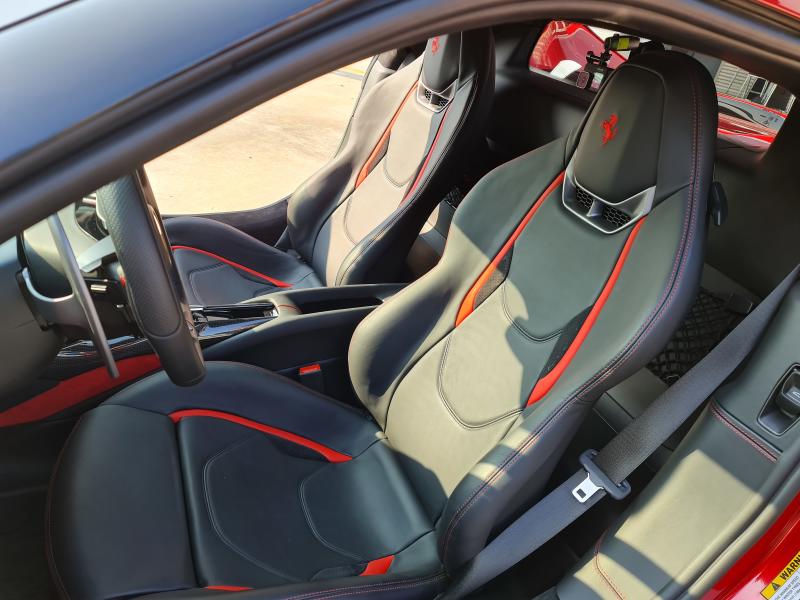 The rear is a mix of modern and classical elements. The upper surface of the tail is dominated by an imposing flying buttress. At its base, it incorporates the engine bay cover which has a unique, three-dimensional glass surface.

On the 296, for the first time, an active device is being used not to manage drag but to generate extra downforce. The LaFerrari-inspired active spoiler integrated into the rear bumper allows the 296 to generate high rear downforce when required: the equivalent of a maximum of 360kg at 250kph in high-downforce configuration with the Assetto Fiorano package.

The traditional twin round taillights have morphed into two semi-circular indents in the rear surface below the side lights. Adding a modern touch is a single central exhaust tailpipe.

The exterior is rounded off by new 20-inch alloys. The wheels can be specified in carbon-fibre which is 8kg lighter than their forged counterpart.

The cabin has a distinctive design, comprising a visor-style windscreen that wraps around onto the side windows.

The sinuous minimalistic look of the exterior is echoed inside, complemented by an entirely digital interface which Ferrari first debuted on the SF90 Stradale. 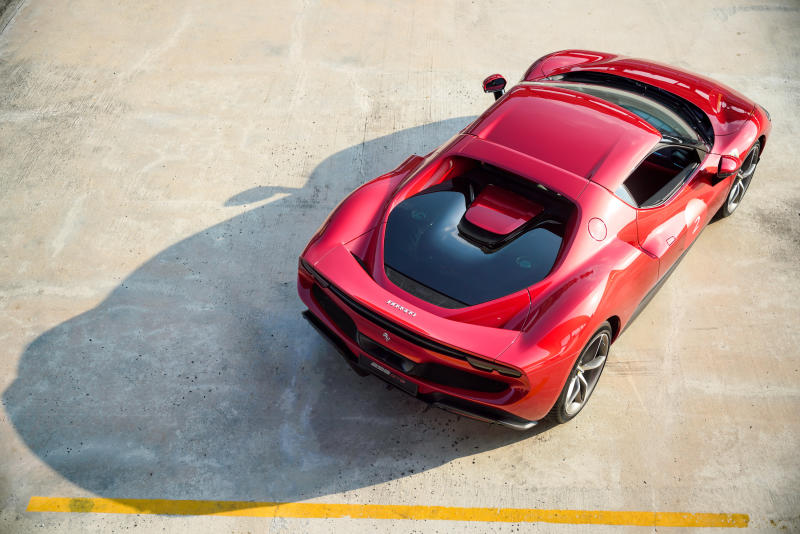 Completing the picture are two side satellites, each with its own capacitive touch area, and an air vent. The passenger side is very minimalistic with the standard passenger-side display, allowing them to live the driving experience as a participant, almost a co-driver.
Bucket seats come with exclusive Italian leather trim. 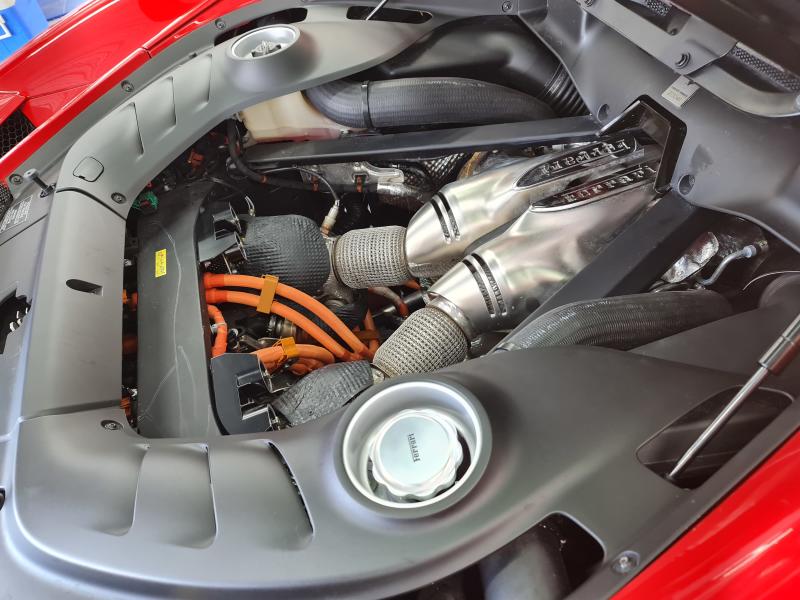 A PHEV at heart

The 296 is the first-ever Ferrari with a rear-wheel drive-only PHEV architecture in which the all-new engine is integrated with a rear-mounted electric motor derived from the Formula 1 application from which it also inherits the MGU-K (Motor Generator Unit, Kinetic) moniker. The electric motor and engine communicate via the Transition Manager Actuator, which allows them to be used both together or decouples them to allow the electric motor to run solo.

Combined output from engine and motor is an astounding 818hp, with 164hp from the motor and 654hp from the engine, making it the most powerful car in its segment. The V6 engine is arranged at an 120-degree angle to lower the powertrain and hence lower the centre of gravity. 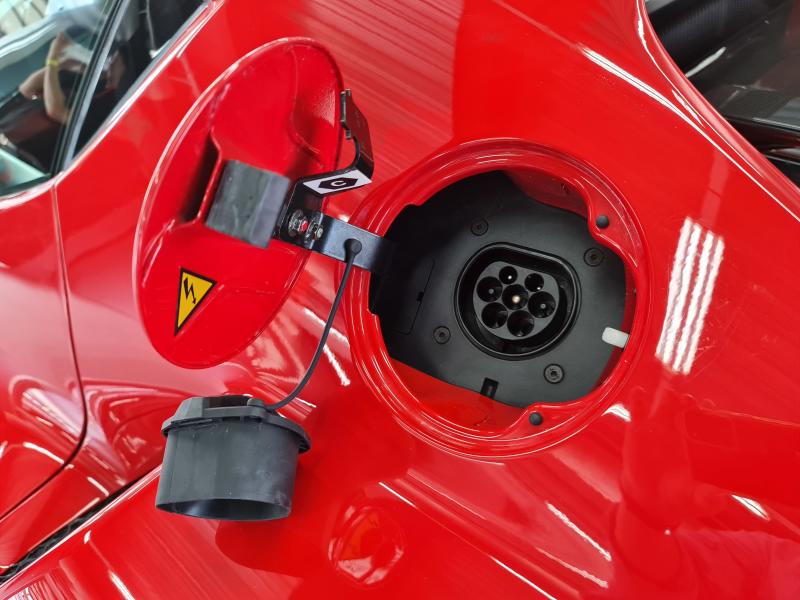 This is the first Ferrari to feature the twin turbos installed inside the vee to result in compact packaging. Transmission is an 8-speed dual clutch, which is touted as having the fastest gear changes in the market.

One sits really low to the ground; even when adjusted to the lowest seat setting, this tallish driver had to crouch a little forward because the helmet was rubbing against the roof.

Being a PHEV, the 296 comes with a new power management selector (eManettino) touch panel located alongside the traditional Manettino switch on the steering wheel.

The eManettino has four settings: eDrive, Hybrid, Performance and Qualify 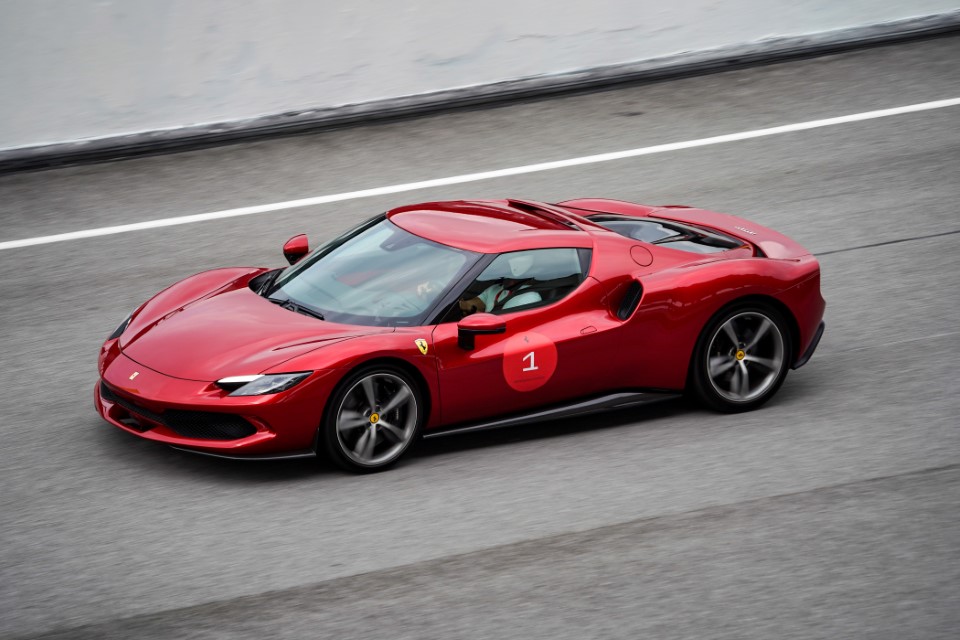 With an instructor riding shotgun, we cycled through the settings as we picked up speed. We set off in eDrive for pure electric driving, which offered 25km on a full charge at a top speed of 135kph. It was disconcerting to feel the Ferrari move off briskly and silently with only the tyre sounds audible.

As we flipped on the default Hybrid mode, there's a dynamic interplay between engine and motor to create power flows for maximum efficiency.

The action really heats up in Performance and Qualify. 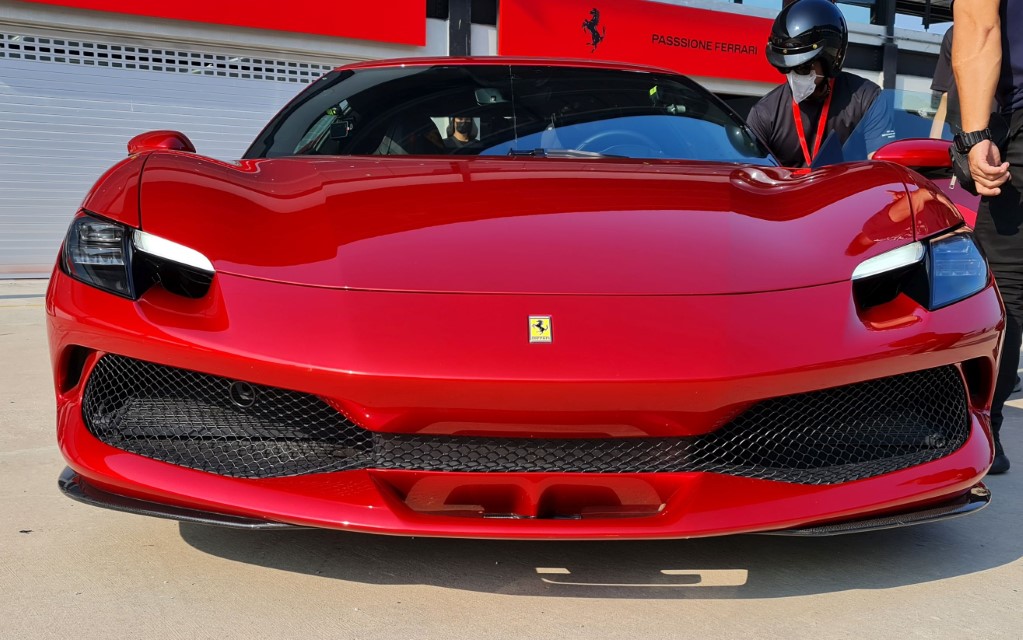 In Performance, the engine is always on and helps maintain the 7.45 Kwh battery efficiency to ensure full power at all times and is the ideal setting for press-on driving. Qualify mode is where both engine and motor pull out all the stops to deliver maximum performance but at the cost of lower battery recharging.

Most track drives are limited to three laps but we got six on the 5.5km Sepang track, known for its technicality and twin straights for all-out speed.

And so round and round we went through hairpins, sweeping corners and off-camber curve on the 15-turn circuit.

The 296 was fast, agile and drove like a dream. 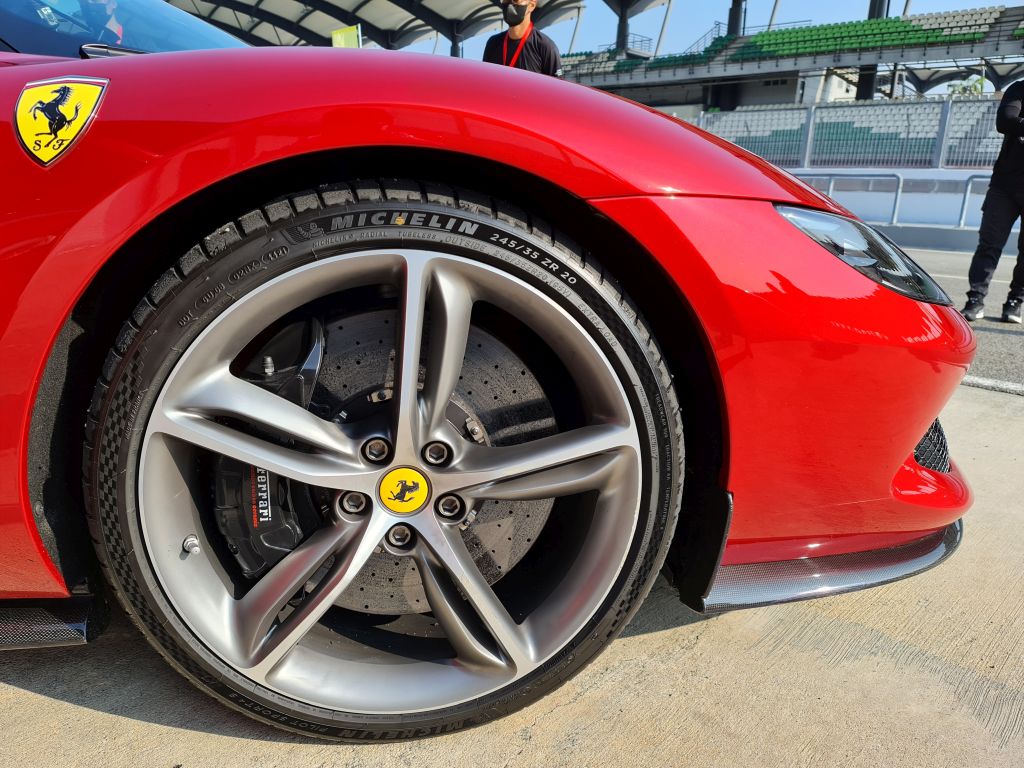 We managed to hit 280kph in the grandstand straights and the brakes worked well to slow down the car quickly. Steering feel was excellent. With such a low centre of gravity, the 296 did travel like a go-kart on steroids.

Twice, we could feel the back start to give way on exiting a corner a little too exuberantly but the car was forgiving and didn't try to run us off the track. A quick hand/foot co-ordination to modulate the throttle and brakes, and steer into the turn, was enough to straighten it out.

Maranello didn't call the V6 the "little V12" for nothing. It's the little engine that could and is one serious screamer. Ferrari engineers have tuned the engine in such a way that it almost sounds like its bigger brethren. 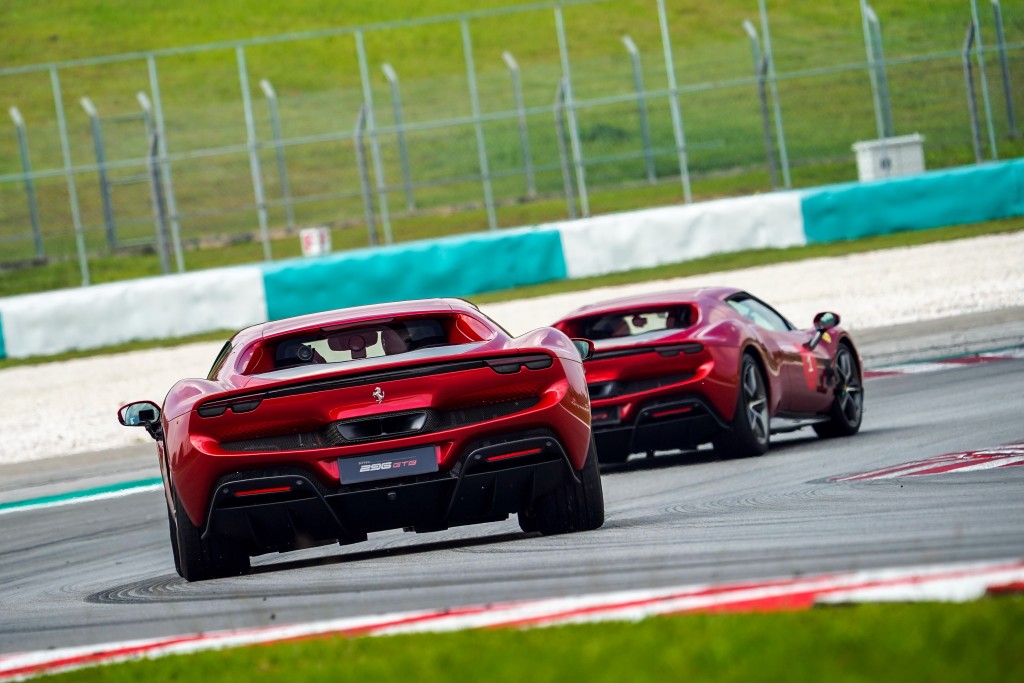 Ultimately, can this V6 Ferrari tug at your heartstrings? 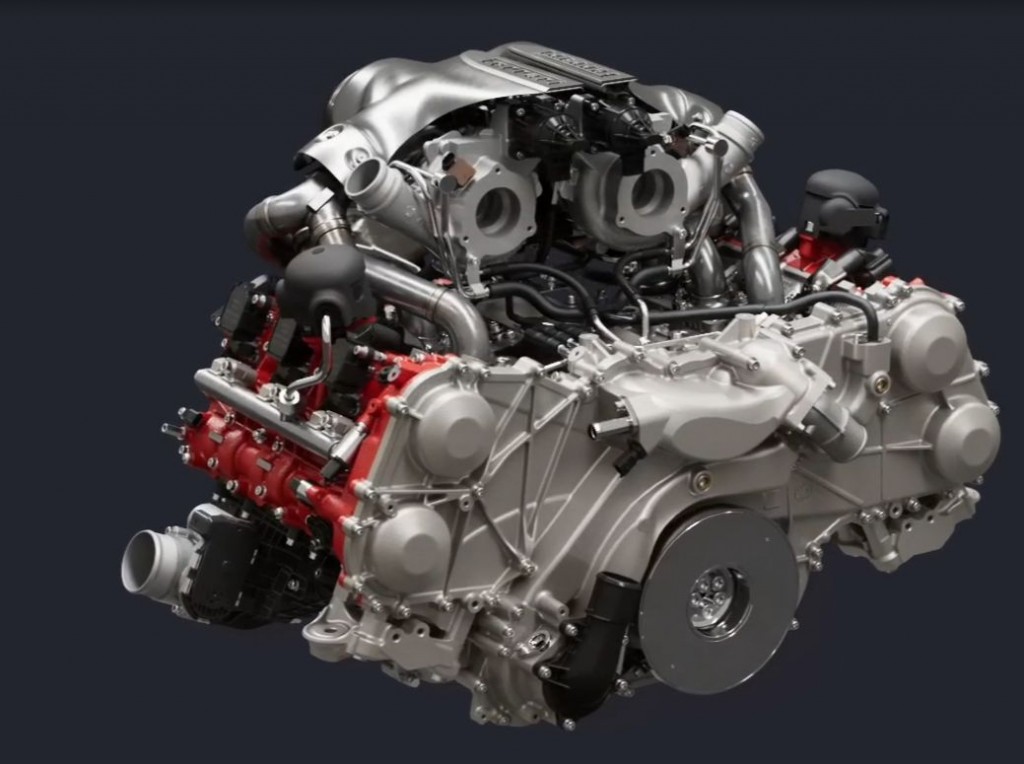 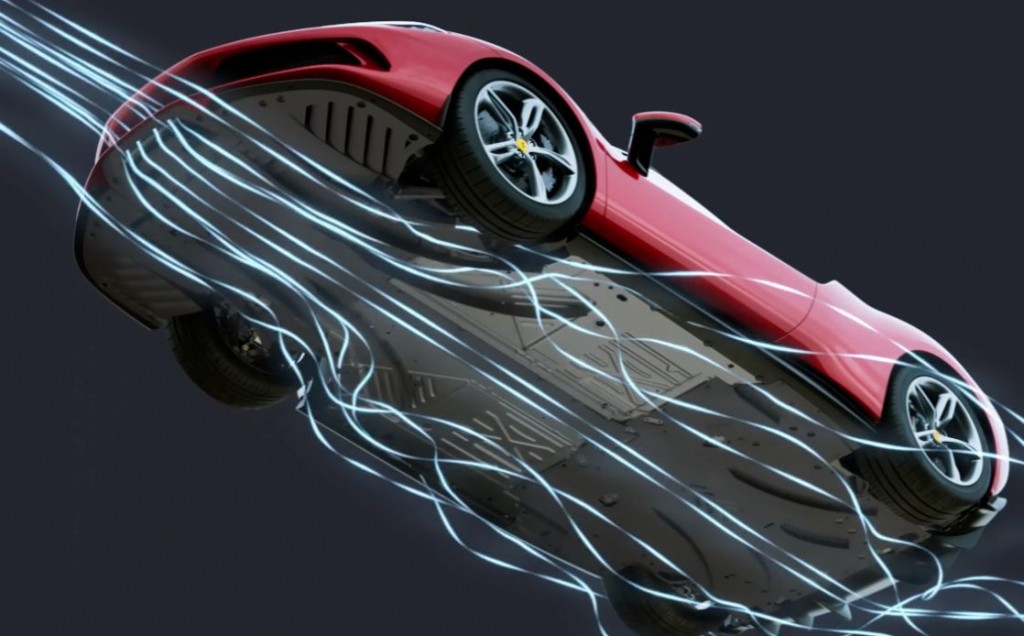 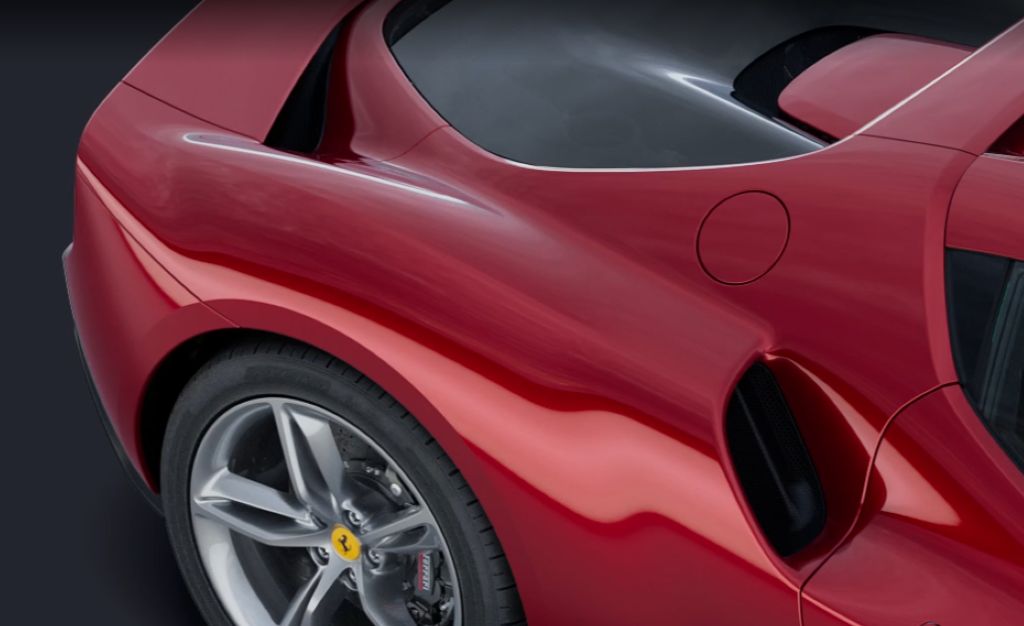 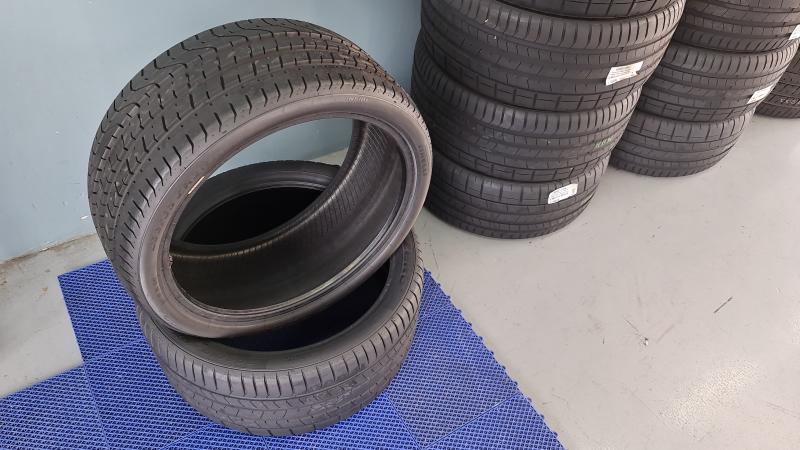 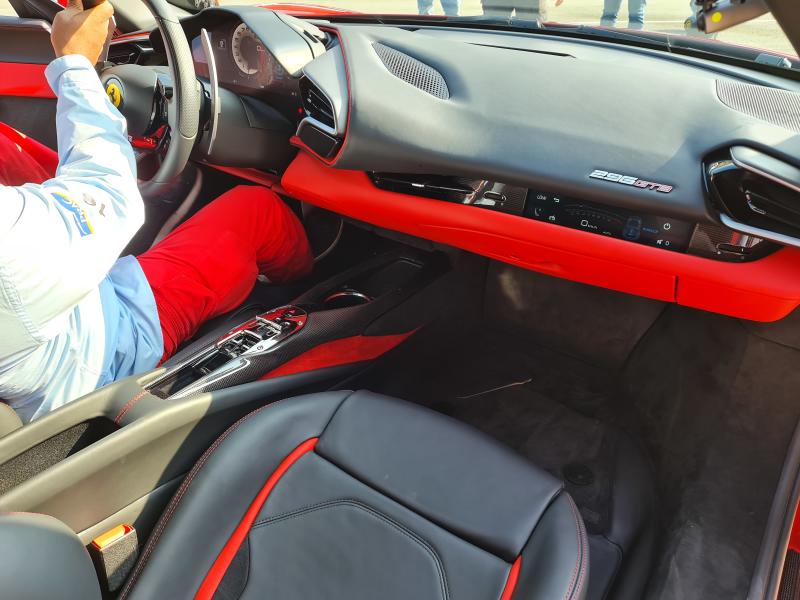 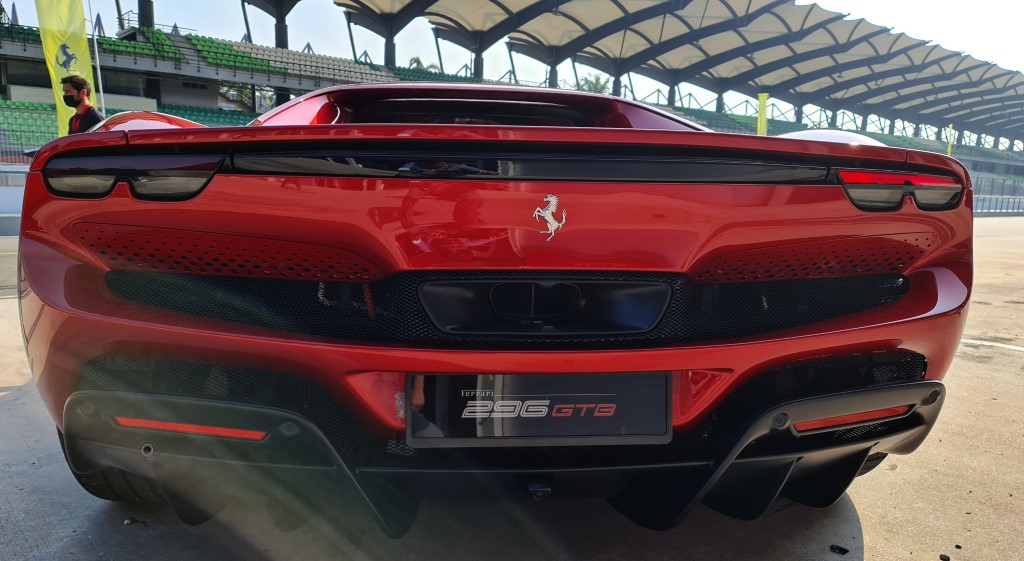 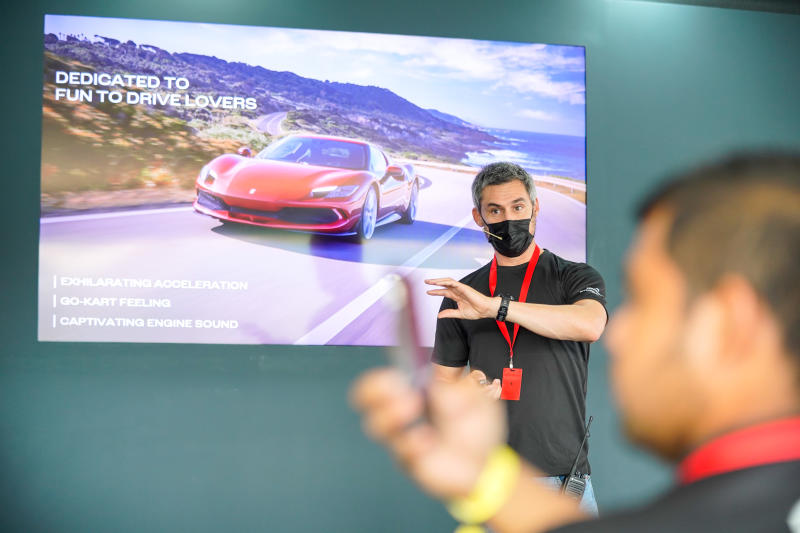 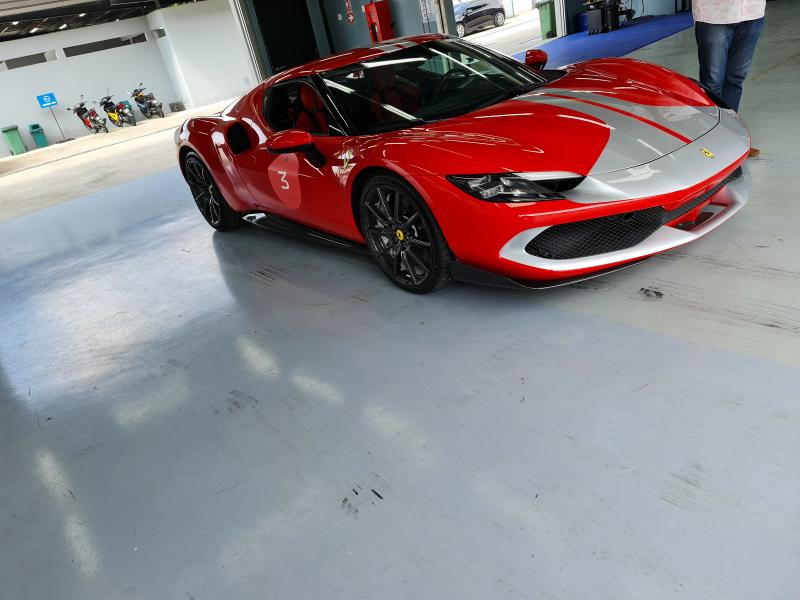