PETALING JAYA: As we leave a tumultuous year behind, we enter 2021 with fresh hope and cautious optimism.

No doubt car manufacturers feel the same way as they see 2021 as a chance to stage a recovery that will certainly take more than a calendar year to reach the pre-pandemic hustle and bustle.

But there's reason to cheer after the Government decided to extend the sales tax exemption until the end of June 2021 after initially saying no.

New model launches will carry on under the new normal of business practices. 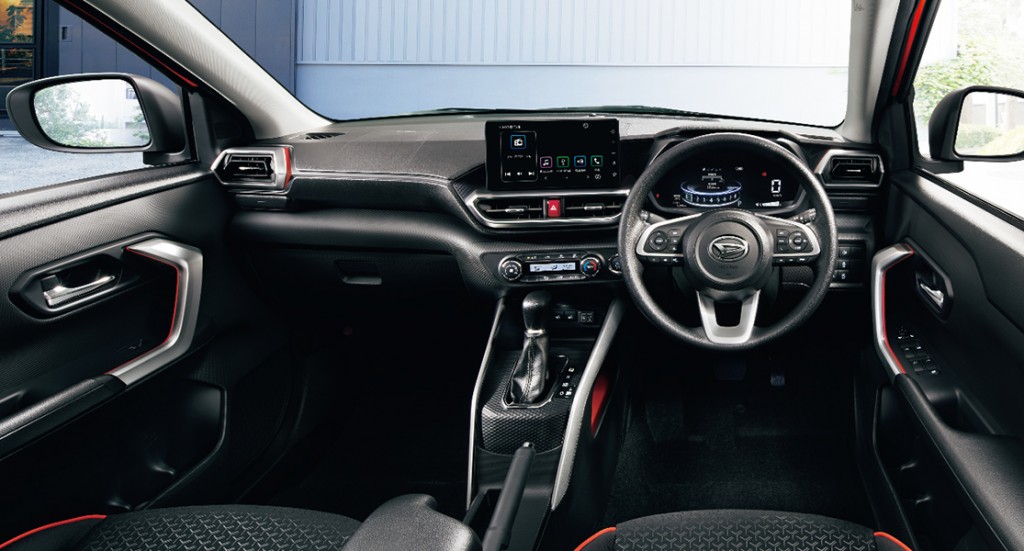 How the Rocky looks from inside.
1. Perodua D55L SUV

The budget compact car juggernaut is expected to delay the release of its B-segment SUV to March after many thought it would be launched this year.

But Covid-19 caused a disruption (it may still do so if infections keep rising or vaccinations are slow to deploy).

To recap, the small SUV codenamed D55L is based on the Daihatsu Rocky/Toyota Raize. It is slightly bigger than the Myvi and will sit above the hatchback.

Comparisons with the popular Proton X50 are inevitable though the D55L is expected to be less sophisticated and will be priced lower.

In Japan, the Rocky's power comes from a 1.0-litre three-cylinder turbocharged engine mated to a CVT which produces 98hp and 140Nm of torque. It's not cast in stone yet. Perodua may instead use the familiar 1.5-litre powertrain seen in the Myvi. The S50 could well be the successor to the Preve that has already ceased production.

The S50 is based on the Geely Binrui that debuted in China more than two years ago and has recently been updated cosmetically for a sportier look.

The Binrui is built on the Geely BMA platform that was co-developed with Volvo.

Despite the waning appeal of C-segment sedans as the public gravitate to SUVs, Proton still need to offer up this class of vehicle to cater to government fleets.

The BMA platform is also known to be versatile enough to accommodate other engine options such as the 1.5 litre turbo three-cylinder and seven-speed DCT seen in the X50. 
Online pre-bookings for the more powerful versions of the M3 sedan and its sibling M4 coupe have started since the start of this month.

Both models are scheduled to launch and enter showrooms in Q3 2021.

Pricing for the new models (on-the-road without insurance) starts with the M3 Competition at RM664,800.

The M4 Competition is priced at RM684,800. Both models are offered with extra kit via the optional Innovation Package.

The engines are managed by an eight-speed M Steptronic automatic transmission with Drivelogic for the rear wheels.

An M xDrive all-wheel-drive option will only find its way here sometime in the middle of 2021. With Volvo and its Malaysian ops gung-ho about electrification, it's only a matter of time before it delivers the XC40 in plug-in hybrid form. Right now, only the T5 R Design is sold in Malaysia featuring a 2.0 litre turbocharged four-cylinder engine, making 252hp/350Nm.

Word is that Thailand's XC40 Recharge T5 is imported from the Volvo plant in Malaysia, so we expect Volvo Malaysia to allocate some for domestic consumption. The XC40 Recharge T5 uses a 1.5 litre turbocharged three-cylinder petrol engine that, coupled with the electric motor, dishes up a system output of 258hp/425Nm. All that torque is routed to the front axle through a seven-speed wet dual-clutch transmission.

With the eventual release of the PHEV, we expect the T5 R Design to drop out.

Note that the XC40 Recharge is also available as a full electric vehicle with a 400km range.

Going by the fact compact SUVs are growing from strength to strength , it would be remiss for Volvo not to capitalise on the groundswell to profit by rolling out a compact PHEV in the local market that would also be kinder to the environment. The XC40 Recharge T5 fits the bill for those looking for a premium eco SUV with high levels of safety. Stuttgart debuted the new S-Class in September and the flagship should waft in to Malaysia in 2021.

Mercedes-Benz said it has created a feel-good ambience with lounge character marked by elegance, high quality and lightness in the new S-Class. The dashboard with its new architecture, modern surface design and ergonomic display arrangement is a particular highlight.
The new model has become more intelligent in many areas, and the driving experience is at the next level. Digital innovations such as in MBUX (Mercedes-Benz User Experience) are joined by innovations that increase driving enjoyment while making driving even safer: among them are rear-axle steering with a large steering angle and safety innovations such as the rear airbag.

Six-cylinder in-line petrol and diesel engines in various output classes are the first engine variants for the new S-Class. A V8 engine with an integrated starter-generator (ISG) and 48-volt onboard electrical system will be available soon after. A plug-in hybrid with an all-electric range of around 100km will follow in 2021.

The Malaysian market may get 2 variants of the S-Class like the present arrangement with a 6-cylinder petrol entry followed by the plug-in. An all-electric S-Class for Malaysia is still up in the air.

With the City Hatchback having its world debut in Thailand last month, its arrival in Malaysia won't be far behind. Like in 2021.

The City Hatchback is based on the fifth-generation City sedan and is shorter by 208mm but taller by 21mm, and comes in three variants over there. Except for the rear, the rest of the car is visually the same as the sedan version inside and out.

While Honda Malaysia is still selling the ageing Jazz now, it's expected to be discontinued to make way for the City Hatchback, which will go up against the Toyota Yaris.

Compared to the City sedan, the hatchback promises more legroom than the sedan and features Ultra Seats, enabling four rear seat configuration for practicality. It is also longer and wider than the Jazz.

The City Hatchback in Thailand uses the 1.0-litre three-cylinder turbocharged multi-point injection engine which produces 122hp and 173Nm of torque mated to a continuous variable transmission (CVT) similar to that in the City sedan offered there.

In Malaysia's case, the engine to be equipped could likely be the 1.5-litre four-cylinder i-VTEC DOHC delivering 119hp and 145Nm of torque similar to what the local City sedan uses now. Transmission will also likely be CVT as well.

The eighth-generation Volkswagen Golf GTi is coming, and that's exciting news in itself. What's even more is that it will be locally assembled for the first time, making it more affordable to the masses.

The GTi is available as a manual but the Malaysian market will get the 7-speed DSG dual clutch gearbox.

The chassis has been substantially modified , while all electronic functions are networked by a central computer. This driving dynamics manager is intended to bridge the gap between an emphatically sporty set-up and high long-distance comfort.

An LED strip extends across the entire hood, making the GTI unmistakable even at night.

Inside, the classic checked pattern has been given a new, fresh look, and now covers the new sports seats. The off-roading maestro is expected to make landfall in the first quarter of 2021.

The styling of the permanent four-wheel-drive Defender has been evolved from the car's utilitarian roots with the goal of generating more sophisticated but still rugged appeal.

Following its world premiere at the Frankfurt Motor Show in 2019, the Defender has won 28 international awards.

Land Rover has also introduced its range of in-line six-cylinder Ingenium diesel and petrol engines, featuring mild hybrid technology, and its advanced P400e plug-in hybrid powertrain, which provides an all-electric range of up to 43km.

The Defender is available in 90, 110 and practical Hard Top commercial derivatives.

The five-door Defender 110 variant is half a metre longer than the Defender 90 which has three doors. Land Rover said the smaller model can still accommodate six people. Hello, it's another SUV again. The arrival of the Nissan Kicks has been talked about since 2018 but its launch has been "kicked" around from 2018 through to 2020 and now it's said to be showing up in 2021.

In between, the Kicks had undergone a facelift to keep it going and was unveiled in Thailand earlier this year.

For consumers, the Kicks will add variety to the competitive field that now includes Proton X50, Renault Captur and Honda HR-V.

The facelifted Kicks features a larger V-motion grille, as well as revised headlights and boomerang-shaped light graphics for the rear lights.

The D-shaped steering wheel and 17-inch aluminum alloy wheels give the SUV a sporty look.

The Kicks uses Nissan's e-Power hybrid system that has an electric motor driving the car while the 1.2-litre, three-cylinder petrol engine is only used as a generator to charge the 1.57 kWh lithium-ion battery pack hidden under the front seats.

The electric motor makes 127hp and 260Nm of torque. Some car makers still believe in MPVs. Lexus, for one, will be introducing the all-new LM350 luxury multi-purpose vehicle in May.

The LM350 is basically a glorified Toyota Alphard with more space and amenities to pamper its passengers. Instead of the Alphard's 7-seat capacity, the Lexus MPV has only 4 seats to make it more exclusive.

The second row gets two VIP lounge seats with generous legroom even when the Adaptipedic seats are fully reclined.

Other premium features include seats with air-cooled and heated functions with Ottoman massage, a mini refrigerator, a 19-speaker Mark Levinson reference sound system and a 26-inch full HD display panel for rear passengers. For rear passenger privacy, a glass partition that can be raised or lowered at a touch of a button has been included to close off the front seats.

The MPV is propelled by a 3.5-litre quad cam V6 delivering 296hp and 361Nm of torque mated to a direct-shift eight-speed automatic transmission

Lexus Malaysia is accepting bookings from this month. The MPV is priced from RM1.148mil.