MARANELLO: It panned out as StarCarSifu had expected last week. Ferrari's latest model is an entry level mid-engine sports car that has a turbocharged V6 engine — and it's a plug-in electric vehicle (PHEV).

Ferrari unveiled today the 296 GTB in an online world premiere from Maranello, the third series plug-in hybrid after the more powerful SF90 Stradale and the SF90 Spider.

The arrival of this electrified model comes as Ferrari gears up for 2025 when it will introduce its first all-electric sports car.

Described by Ferrari as the most "fun to drive" model, the 296 GTB has a 2,600mm wheelbase and is the shortest wheel-based model in the Ferrari line-up.

The 296 GTB (the number refers to the 2.9l engine displacement and the V6 engine, GTB is Gran Turismo Berlinetta) is targeted at car enthusiasts and is also aimed at attracting new Ferrari clients, according to Ferrari chief marketing and commercial officer Enrico Galliera.

This is the first-ever Ferrari with a rear-wheel drive-only PHEV architecture in which the all-new engine is integrated with a rear-mounted electric motor derived from the Formula 1 application from which it also inherits the MGU-K (Motor Generator Unit, Kinetic) moniker. The electric motor and engine communicate via the Transition Manager Actuator, which allows them to be used both together or decouples them to allow the electric motor to run solo.

Combined output from engine and motor is an impressive 830hp, with 167hp from the motor and 663hp from the engine,  making it the most powerful car in its segment.  The new Ferrari built V6 sets a record of 221 hp/l for specific torque output for a production car. The V6 engine is arranged at an 120-degree angle to lower the powertrain and therefore lower the centre of gravity. This is the first Ferrari to feature the twin turbos installed inside the vee to result in compact packaging. Transmission is an 8-speed dual clutch, which is touted as having the fastest gear changes in the market.

A power management selector (eManettino) has been adopted alongside the traditional Manettino on the steering wheel, The eManettino has four positions:

> eDrive: the internal combustion engine is off and there is pure electric drive to the rear wheels; with a fully-charged battery the car can cover 25 km at a maximum speed of 135kph

> Hybrid (H): this is the default mode on ignition. The power flows are managed for maximum efficiency and the control logic defines the intervention of the internal combustion engine. With the engine on, the car develops its maximum power and performance

> Performance: the engine is always on and helps maintain the 7.45 Kwh battery efficiency to ensure full power at all times. This is the ideal setting for press-on driving

> Qualify: provides maximum performance but at the cost of lower battery recharging Ferrari said the 296 GTB rewrites the rulebook sound-wise by harmoniously combining two characteristics that are normally diametrically opposed: the force of the turbos and the harmony of the high-frequency notes of a naturally-aspirated V12.

Even at low revs, inside the cabin, the soundtrack features the pure V12 orders of harmonics which then, at higher revs, guarantee that typical high-frequency treble.

Even to those outside the car, the shrill sound of the engine is instantly recognisable. The first in the F163 engine family, this V6 earned itself the nickname “piccolo V12” (little V12) during the development phase.

The 120° V architecture guarantees a symmetrical firing order while the equal-length, tuned exhaust manifolds combined with the single exhaust line outside the hot-V amplify the pressure waves.

These characteristics are what lend purity to the orders of harmonics, which are further helped by a limiter that hits an impressive 8500 rpm.

The patented “hot tube” has been completely redesigned for the 296 GTB and is positioned prior to the exhaust gas treatment systems so that it channels the pure sound into the cabin, further enhancing driver involvement and excitement. Its sporty, sinuous design and extremely compact dimensions also visually underscore its modernity, referencing the likes of the 1963 250 LM, described as a marriage of simplicity and functionality.

The 296 GTB’s front volumes are clean and extremely compact. The headlights take their inspiration from the “teardrop-shaped" headlights of the past. On the 296 GTB, this styling theme is interpreted through two “faired-in teardrops” which are set into the front of the car like jewels.

The effect is completed by the formal composition of the DRL, which acts as the signature of the front of this car, and the brake air intake. The central single-grille styling theme has been given a new twist by reducing the height of the grille in the centre. The result is a bar-bell shape which hints at the presence of the two powerful radiators. In the central section is a compact suspended wing, reminiscent of solutions adopted in F1.

The 296 GTB reveals all of its elegance in the side view, which is characterised by the sinuous muscle of the wings. A clear, strong crease line runs along the doors and melds with the large air intakes positioned at the most aerodynamically efficient point.

The upper surface of the tail is dominated by an imposing flying buttress. At its base, it incorporates the engine bay cover which has a unique, three-dimensional glass surface. The central section features a striking body-coloured element that references a styling theme dear to Maranello that can be traced all the way back to the iconic likes of the Testarossa and F355 GTB.

The 296 GTB’s other rear-end styling feature is its Kamm tail, a surface carved out of a solid volume, that underscores the car’s compact volumes. The upper section of the tail also incorporates a horizontal element that incorporates the taillights and integrated retracting spoiler.

On the 296 GTB, for the first time, an active device is being used not to manage drag but to generate extra downforce. The LaFerrari-inspired active spoiler integrated into the rear bumper allows the 296 GTB to generate a high level of rear downforce when required: the equivalent of a maximum of 360 kg at 250kph in high-downforce configuration with the Assetto Fiorano package. 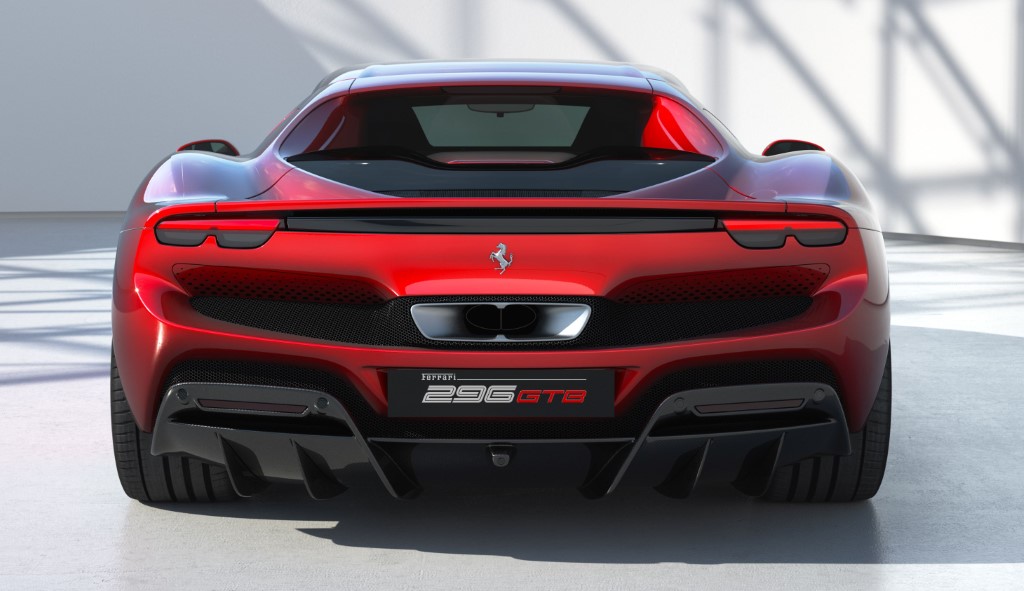 With the lights off, a thin “black screen” line runs horizontally the entire width of the rear. When the taillights are on, two strips of light appear on either end of the rear. The designers chose to reinterpret the traditional twin round taillights by incorporating the other light functions in two semi-circular indents in the rear surface below the side lights.

The 296 GTB features a single central exhaust tailpipe - a modern touch. The exhaust design completes the lower part of the profile of the centre of the bumper, which extends upwards to the taillights at either end, thereby emphasising the horizontal feel of the rear of the car. The central wing is stowed in the bodywork between the taillights and completes the design. This integrated solution is the perfect marriage of functionality, technology and design, guaranteeing that the aerodynamic performance required is delivered without sullying the purity of the design.

The 296 GTB sports a new alloy 20-inch wheel with a twin-spoke design that accentuates the sculptural effect of the starburst shape. A carbon-fibre wheel option is also available and is 8kg lighter than their forged counterpart. The 296 GTB’s cockpit was developed around the new concept of an entirely digital interface which Ferrari first debuted on the SF90 Stradale. This interior layout draws on the latter’s stylistic coherence for its forms.

While with the SF90 Stradale the designers wanted to highlight the presence of the advanced technology and underscore a clear break with the past; in the case of the 296 GTB, the idea was to clothe that technology in a sophisticated way. The result is a pure, minimalistic connotation characterised by a powerful elegance that, on an aesthetic level, mirrors the design of the exterior.

Completing the picture are two side satellites, each with its own capacitive touch area, and an air vent. The passenger side is very minimalistic with the standard passenger-side display, allowing them to live the driving experience as a participant, almost a co-driver.

Seats come with exclusive Italian leather trim and the HUD (Head Up Display) is integrated into the leather trim. The design of the speakers follows the same principle. Rather than metal, the designers have opted for a thermoplastic cover in the same colour as the dash. Ferrari chief design officer Flavio Manzoni described the rear as the most interesting part of the car combining modern and classical elements. With its peculiar shape complemented by an active rear spoiler and unique exhaust positioning, he said it makes for a look that is "clean, clear and original."

As was the case with the SF90 Stradale, an Assetto Fiorano package for track use comprising lightweight carbon fibre parts, suspension upgrades and aero mods will be available at launch.

Now for a bit of history. As stated earlier, the Dino was the first Ferrari with a V6 engine. The 1957 1500cc Dino 156 F2 single-seater featured a 65° architecture. It was followed in 1958 by bigger displacement versions on the front-engined sport prototypes - the 196 S and 296 S - and F1 cars, such as the 246 F1 which powered Mike Hawthorn to the F1 Drivers’ Championship title the same year.

The very first Ferrari to sport a mid-rear-mounted V6 was the 246 SP in 1961, which won the Targa Florio both that same year and in 1962, amongst many others. The 296 GTB with Asseto Fiorano package.