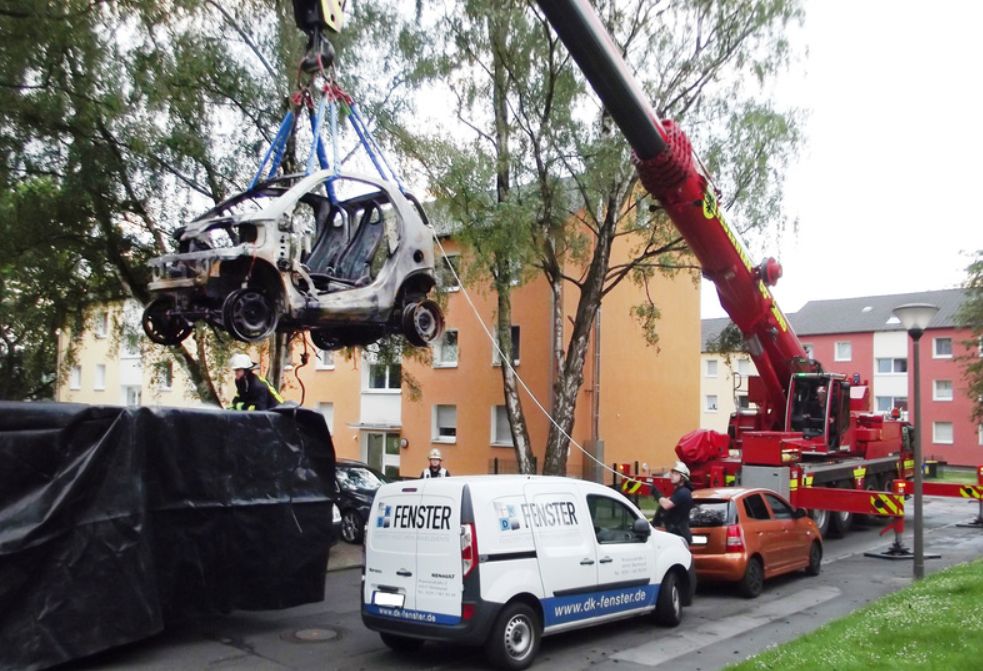 Firefighters in the German city of Dortmund needed to use a giant water bath to bring this EV blaze under control. — dpa

BERLIN: Electric cars may be less of a burden on the environment than diesels, but a serious downside to these zero-emission vehicles is the fire risk they pose in underground car parks.

The issue has prompted officials in Germany to ban electric cars from underground car parks in two towns after a blaze broke out in a subterranean lot.

The car that burned out two months ago in Kulmbach in Bavaria was an ageing petrol-engined VW Golf hatchback and not a pure electric.

However, the damage caused was extensive and the facility had to be shut down for five months.

Officials said the consequences would have been much worse if a battery car had caught fire. Now Teslas, all other electrics and even petrol and diesel hybrids are no longer allowed to use two underground car parks in Kulmbach and Leonberg in the German state of Baden-Wuerttemberg.

In other countries, a wider debate on whether electrics should be banned from underground car parks and tunnels was sparked after a Swiss researchers published footage of the loud bang, metre-long flames and copious amounts of thick, black smoke caused by an electric car on fire.

To see what the impact of burning electric car batteries would be on rescue services and other nearby drivers in tunnels or car parks, the Swiss Materials Testing and Research Institute (Empa) deliberately set a number of electric cars on fire in enclosed spaces.

The resulting video footage and findings, published in September 2020, are somewhat alarming.

"The visibility in the previously brightly lit tunnel section quickly approaches zero," the testers said, backing up their analysis with various videos of exploding electric cars. "After a few minutes, the battery module is completely burnt out."

Their conclusion from tests: Fire departments familiar with fires in conventional cars should be prepared to deal with this kind of fire, and the tunnel or underground car park walls and pipes should not be put at additional risk.

Experts in Germany said their fire brigades cannot extinguish electric car fires easily since the lithium-ion batteries on board continue to smoulder even when doused with water. In some cases the fire can break out again.

The only way to deal with an underground car park car fire is to let the vehicle burn out since the roof of the car park is usually too low to allow heavy equipment to drag out a blazing vehicle.

Another complex method of extinguishing electrics which catch fire is to submerge them completely in a container of water. This prevents re-ignition and the emission of toxic gases.

Although electric cars do not burst into flames more often than those with combustion engines, the blazes are usually serious.

In some cases rescuers are unable to free passengers from a burning vehicle because of the extremely high temperatures generated by burning batteries. A further hazard are short circuits of up to 1,000 volts in the car's high-voltage circuits.

After dozens of initially unexplained fires, South Korean maker Hyundai recently recalled thousands of its all-electric models on sale in the domestic market and replaced their batteries. The maker acted after a report highlighted the batteries as the cause of the fires.