KUALA LUMPUR: Malaysian drivers are ranked 23rd in the world on the Waze 2016 Global Driver Satisfaction Index. But it is also considered the best place to drive in Asean.

The Netherlands comes out on top with an average satisfaction score of 7.54 with France and America coming second and third respectively. Propping up the table is El Salvador who rank as the worst place to drive in the world based on this index with a satisfaction score of 2.85, they are followed closely by Guatemala and the Philippines.

Malaysia’s ranking has slipped from last year to 23rd which puts it in the lower end of the satisfaction index. However out of all global countries, Malaysia scored highly on road quality with the country posting a road quality satisfaction of 9.03, the 6th best score in the world and way and above the global average of 6.71.

Malaysia’s slip down the rankings was due to further countries being added that ranked higher. Additionally, the Wazeyness, Road Safety and Traffic Indices indicated drops from the previous year. 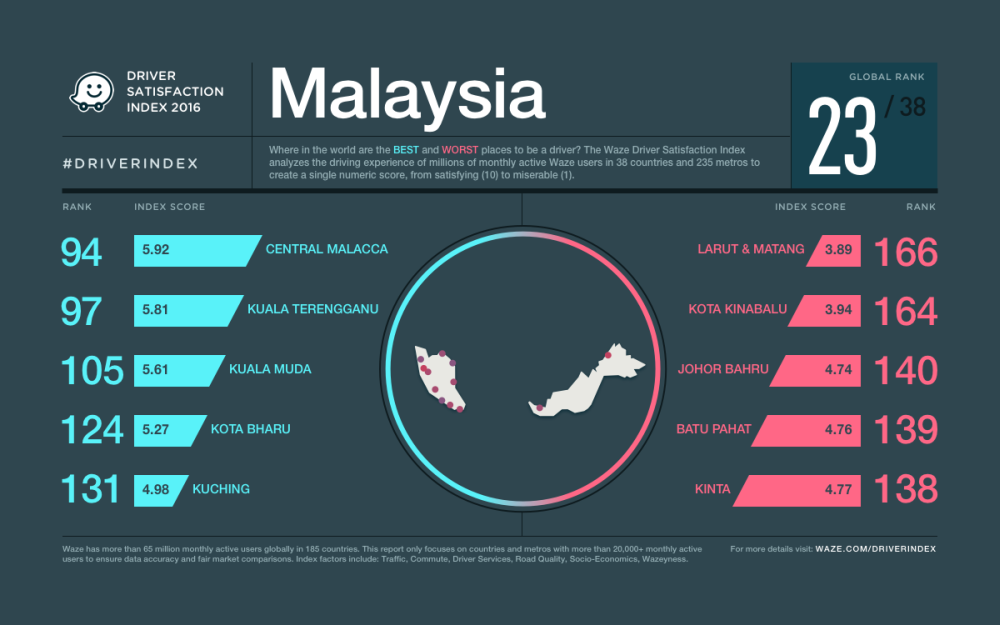 Among the 235 cities and towns in Malaysia, Central Malacca was the highest ranked  city, coming in at 94 for the driving satisfaction index.

Malaysia is one of four Asean countries featured in the index. Singapore, Indonesia and The Philippines were ranked 32, 34 and 37 respectively.

Meanwhile, Cebu in The Philippines was listed as the worst place to drive in the world.