Offered in five-door Sportback and four-door sedan, the vehicles come with a base price of 60,000 euros and 62,000 euros respectively and will be available in Europe this month. Top speed is is limited to 250kph, but 280kph is also available as an optional upgrade.

With the RS Dynamic package and ceramic brakes, the vehicles can even reach a top speed of 290kph, making the RS 3 the best-in-class in terms of acceleration and top speed.

Transmission is the seven-speed dual-clutch type with short shifting times and a sportier gear ratio spread. It can be adjusted via the driving dynamics system Audi drive select.

In the Dynamic and RS Performance modes, the flaps open much earlier – the emotional elements of the sound are even more pronounced. The design of the new Audi RS 3 is even more dynamic and powerful than that of its predecessor.

In the front, the wide RS bumper, the redesigned Singleframe with its distinctive honeycomb grille, and the large air intakes give the compact sports car an expressive appearance.

Matrix LED headlights are available as an option, with darkened bezels that feature digital daytime running lights around their outer downturned angles. 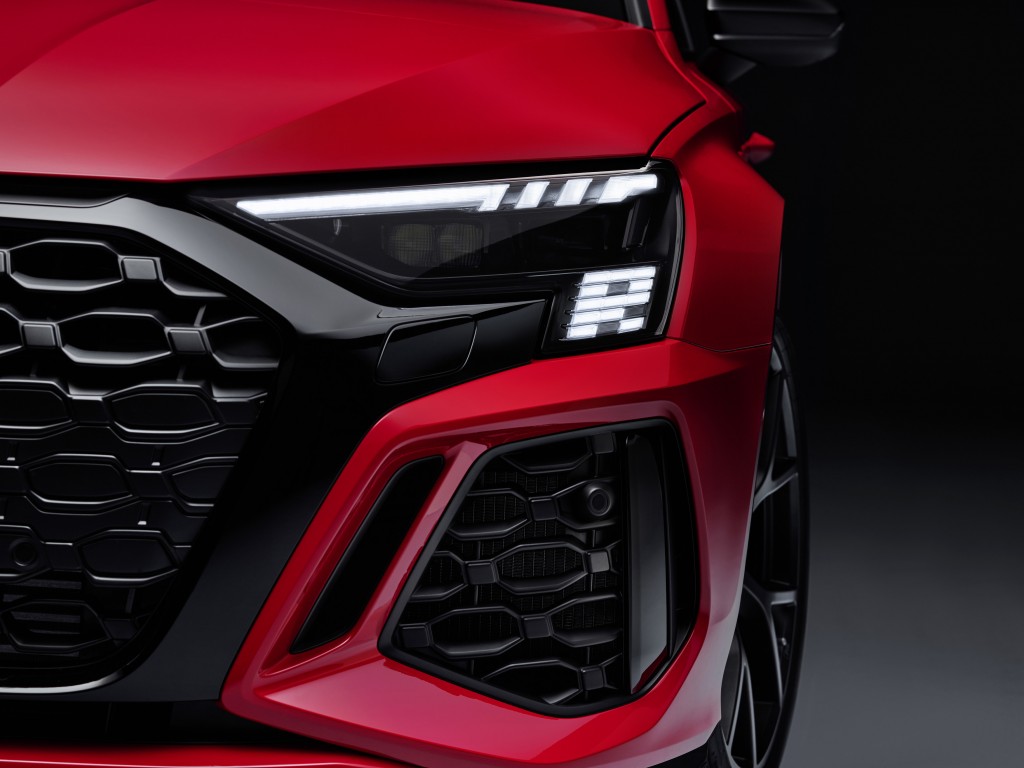 In addition, the unmistakable sound of the five-cylinder engine is further enhanced by the optional RS sports exhaust system.

The new RS 3 is the first Audi model that comes standard-equipped with a torque splitter that replaces the rear axle differential and the previous multiple disc clutch package on the rear axle.

Instead, an electronically controlled multiple disc clutch is used on each of the drive shafts. This ensures that the right amount of torque is optimally distributed along the rear axle.

During more dynamic driving, the torque splitter increases the drive torque to the outer rear wheel with the higher wheel load, which significantly reduces the tendency to understeer.

The new technology also makes controlled drifts on closed-off tracks possible – in this case, the torque splitter directs all of the power to only one of the rear wheels, with up to 1,750Nm per wheel possible. Audi even developed a driving mode specifically for the RS 3 for this purpose – “RS Torque Rear” – as a drift mode with its own characteristic curve for the torque splitter.

The standard RS sports suspension features newly developed shock absorbers and a valve system both specific to the RS 3.

The valves ensure that the shock absorbers exhibit a particularly sensitive response as part of the rebound and compression characteristics.

This allows the suspension to respond to the respective driving situation even faster and more effectively.

The RS sport suspension plus with adaptive damper control is available as an option.

It continuously and individually adjusts each shock absorber to the road conditions, the driving situation, and the mode selected in Audi drive select. It also assists based on speed and can be varied via Audi drive select.

Another new addition to the RS 3 is the modular vehicle dynamics controller (mVDC) that captures data from all the components relevant to lateral dynamics, thus ensuring that they interact more precisely and more quickly.

The RS 3's standard-equipped with larger and newly developed six-piston steel brakes can be upgraded to a ceramic brake system measuring 380mm by 38mm is optionally available on the front axle. The high-performance brake system weighs another 10kg less than the steel brake.

This makes them larger and more stable than in the previous model.

In addition, it also reduces brake pad wear, which are 15% larger and copper-free.

Those who opt for the ceramic brakes can choose between gray, red, or blue brake calipers. Those who prefer the steel version can order red calipers instead of the black ones.

The RS 3 is standard-equipped with 19-inch cast wheels in a 10-Y spoke design.

The motorsports-inspired finishing touches include the redesigned RS-specific rear bumper with integrated diffuser and the RS exhaust system with two large oval tailpipes.

The roof of the Sedan can also be ordered in the contrasting color Brilliant black for the first time.

Individual exterior features, such as the honeycomb grille in the Singleframe, come standard in black – either in a matte or high-gloss finish.

The Alu-Optic Trim package is available as an option and accentuates the front bumper, diffuser insert, and window trim.

For an even sportier look, the rocker panel inlays are also available in carbon-fibre-reinforced polymer.

In the interior, too, many elements specific to the RS accentuate its sportiness.

The displays appear in the 12.3-inch Audi virtual cockpit plus, which comes standard.

It displays the rpms in the form of a bar graph and shows power and torque as percentages.

Optionally, the rpm display is available in the new “RS Runway” design. In this case, the values are displayed in the opposite direction in a manner that visually resembles an airplane runway – the highest speed in the foreground and the lowest speed in the background.

In addition, the Audi virtual cockpit plus includes displays for g‑forces, lap times and acceleration from 0‑100kph, 0-200kph, quarter mile, and eighth of a mile.

The 10.1-inch touch display includes what is referred to as the “RS Monitor,” which displays the coolant, engine, and transmission oil temperatures as well as tyre pressures.

Also available for the first time for the Audi RS 3 is a head-up display that projects relevant information onto the windshield in the driver's direct line of sight in addition to the shift light indicator.

The genuine racing feeling is further enhanced by the carbon-fibre instrument panel and RS sport seats with RS embossing and anthracite contrast stitching.

The seat upholstery is optionally available in fine Nappa leather with RS honeycomb stitching and glossy black, red, or, for the first time, green contrast stitching.