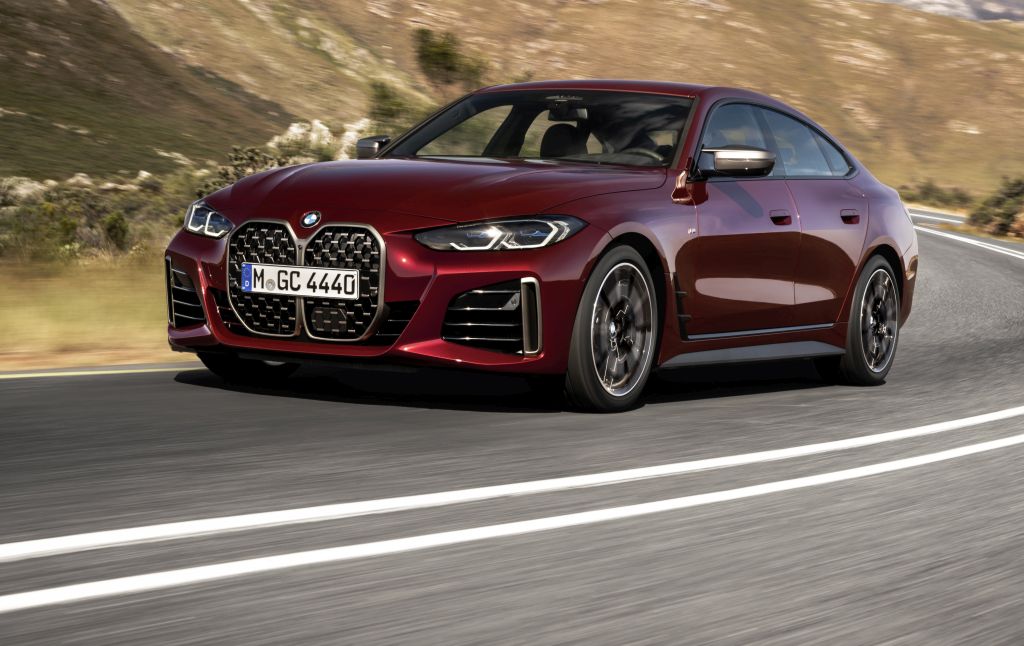 This time around, the M version of the 4 Series Gran Coupé
would be available from the car’s market launch in November alongside four other model variants.

Like its recently updated BMW 4 Series siblings, the third body variant in the range adopts the brand’s new design language, along with a refined premium ambience in the cabin and a wide array of innovations in the areas of control/operation and connectivity. 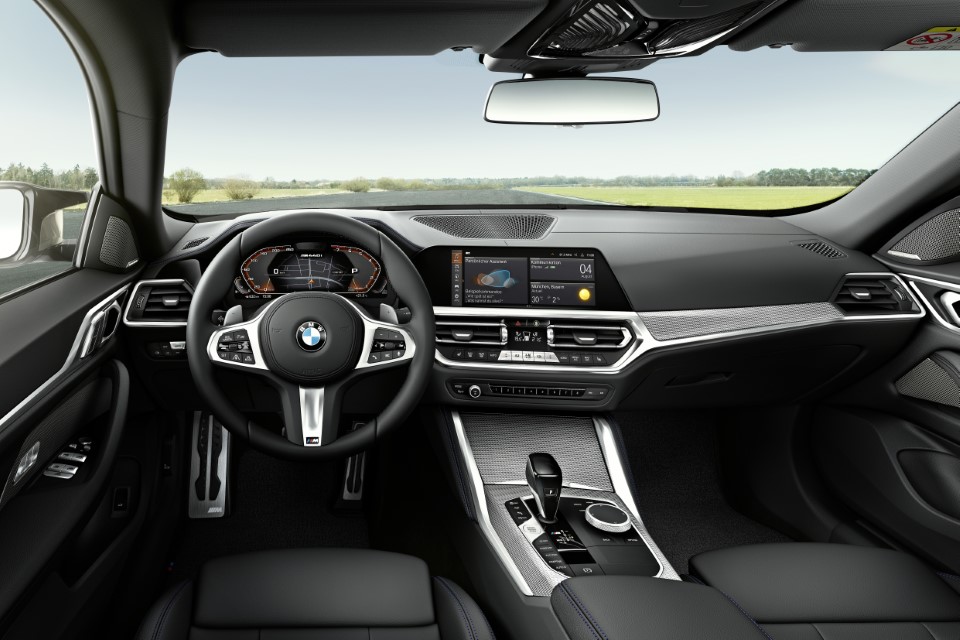 The new edition of the GC would be built at BMW Group Plant Munich together with the all-electric BMW i4. Assembly of both at the company’s home plant will be almost entirely integrated into the manufacturing process developed for the BMW 3 Series Saloon and BMW 3 Series Touring models.

The second generation of the GC is based on the technical underpinnings of the new 4 Series Coupé, which means a far broader set of design and dynamic performance characteristics now distinguishes it from the 3 Series range, compared with the outgoing model. 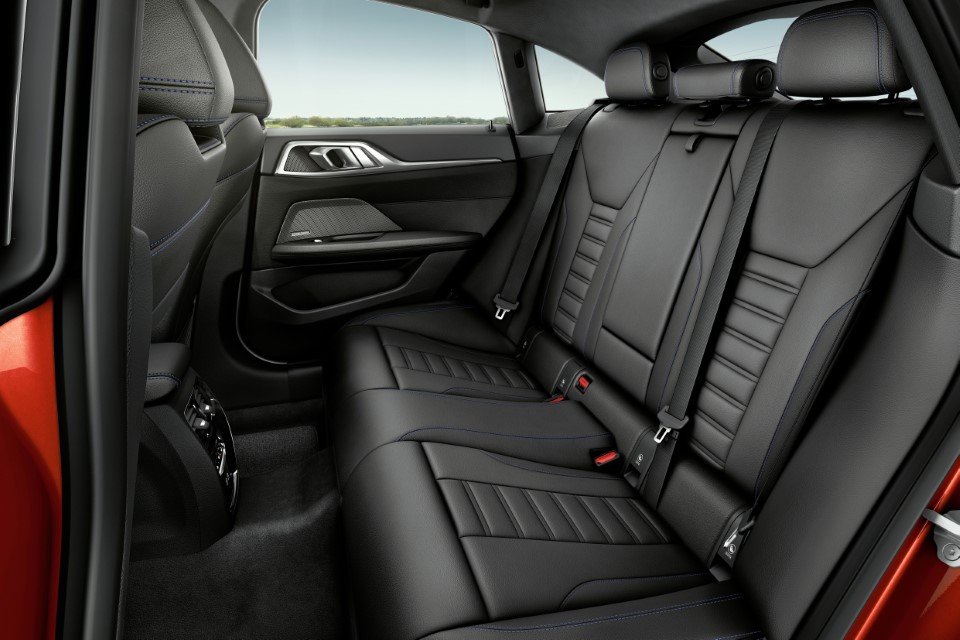 The car’s aerodynamics and the rigidity of the body and chassis mountings have undergone rigorous optimisation, while bespoke tuning of the chassis technology promises a sporty and stimulating driving experience. Bold lines and surfaces with a three-dimensional structure are the defining elements of the new GC's expressive front end. Dropping deep down at its centre is the large and vertically prominent BMW kidney grille, which features mesh air intakes. The vertical intakes for the air curtains at the outer edges of the front apron work to accentuate the car’s width.

Like the bonnet’s character lines, the contours of the extremely slim headlights zero in on the kidney grille. The new GC comes as standard with Adaptive LED headlights, which include two slender, U-shaped fibre-optic light guides that serve as the daytime driving lights. There is also the option of BMW Laser Light including BMW Selective Beam non-dazzling high-beam assistant. 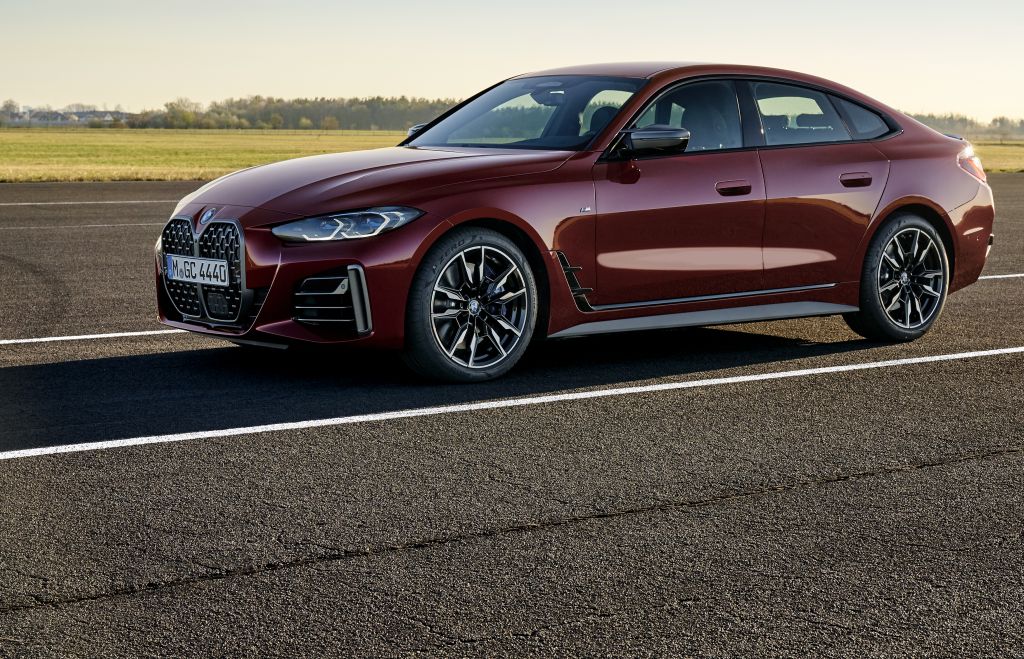 Smoothly sculpted surfaces structured by crisp lines combine to produce a graceful, sporty look when the new GC is viewed from the side. The flush-fitting door handles have a streamlined design, while the roofline ends in a pronounced spoiler lip on the boot lid.

Horizontal lines accentuating the car’s width are the dominant influence at the rear end. It is an effect reinforced by both the slim and stylishly darkened full-LED rear lights, which extend well into the flanks, and the vertical aero lips at the rear apron’s outer edges. The Black finish for the lower areas of the side skirts and rear apron has the effect of giving the GC a very low-slung stance on the road.

As for the top M440i GC, eye-catching looks reference its sporting character. The front apron has the signature U-shaped graphic of M models. The BMW kidney grille surround and the vertical trim around the air curtains come in Cerium Grey, as do the exterior mirror caps, tailpipe finishers and model badges, while the air breathers, the side sill trim strips and lower rear bumper trim including the side trim elements are painted in High-gloss Black.

An M-specific spoiler on the boot lid rounds off the appearance of the M440i GC. 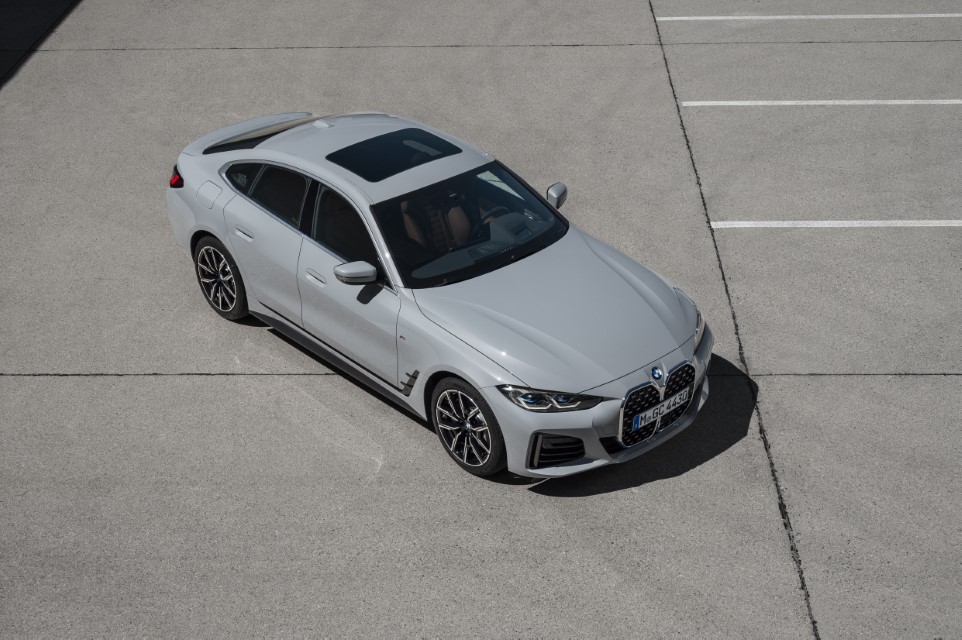 The new BMW 4 Series Gran Coupé body includes numerous measures that optimise its aerodynamic properties and have a beneficial effect on both driving dynamics and efficiency. An active air flap control system comprising flaps at the top and bottom, air curtains, streamlined light-alloy wheels and an almost completely sealed underbody serve to channel the airflow effectively. The drag coefficient (Cd) of 0.26 measured for the 420d Gran Coupé, for example, represents a reduction of 0.02 over its predecessor.

Inside the car, there is a driver-centric cockpit design and plenty of space for front and rear-seat passengers. Soft, raised knee pads on the centre console further accentuate the car’s engaging driving character. 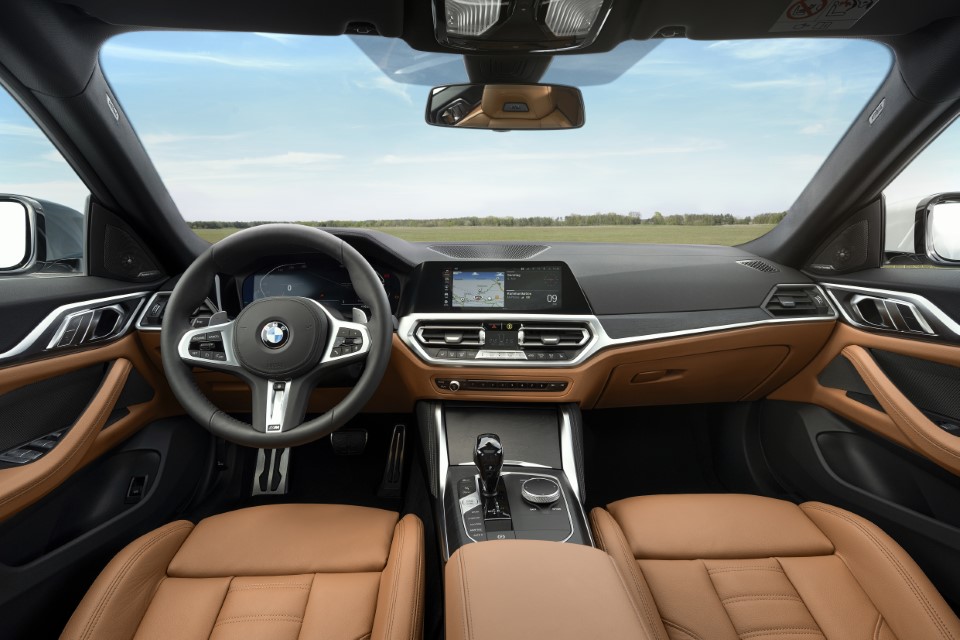 The five seats with standard folding head restraints are part and parcel of a versatile interior, which offers generous amounts of space in the rear with three full-size seats and more legroom and headroom than in both the outgoing model and the new 4 Series Coupé.

The high centre console and flowing surface structure running from the instrument panel into the door panels generate a cocooning feel in the front seats.

The new GC offers 470 litres of boot space – an increase of 39 litres. Load space can be expanded to a maximum of 1,290 litres by folding down the sections of the rear backrest, with its standard 40:20:40 split. 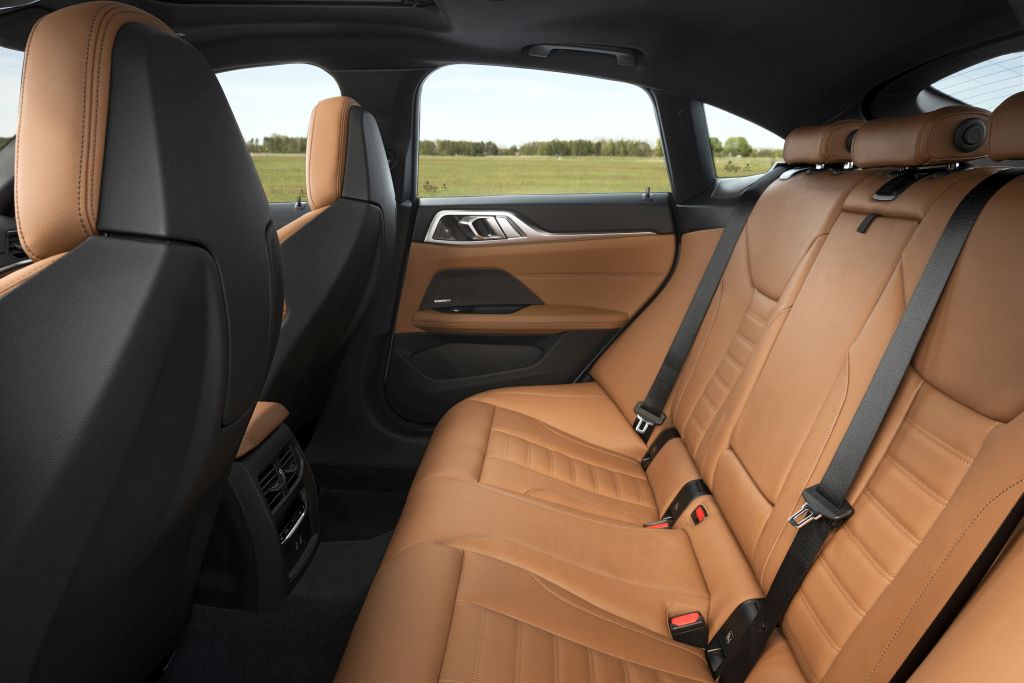 The Start/Stop button for the engine is positioned in a control panel in the centre console, which also houses the BMW Controller and the buttons for the Driving Experience Control unit and electromechanical parking brake alongside the model-specific gearshift lever. The exclusive trim on the front door panels features in the rear, too, with the interior trim strips finished in High-gloss Black as standard.

The trio of petrol engines available feature a twin-scroll turbocharger, a High Precision Injection system whose maximum pressure has been upped from 200 to 350 bar, VALVETRONIC fully variable valve timing and Double-VANOS variable camshaft timing, along with cooling and oil supply systems that are now more efficient. Petrol particulate filters have been added to improve their system of emission control. 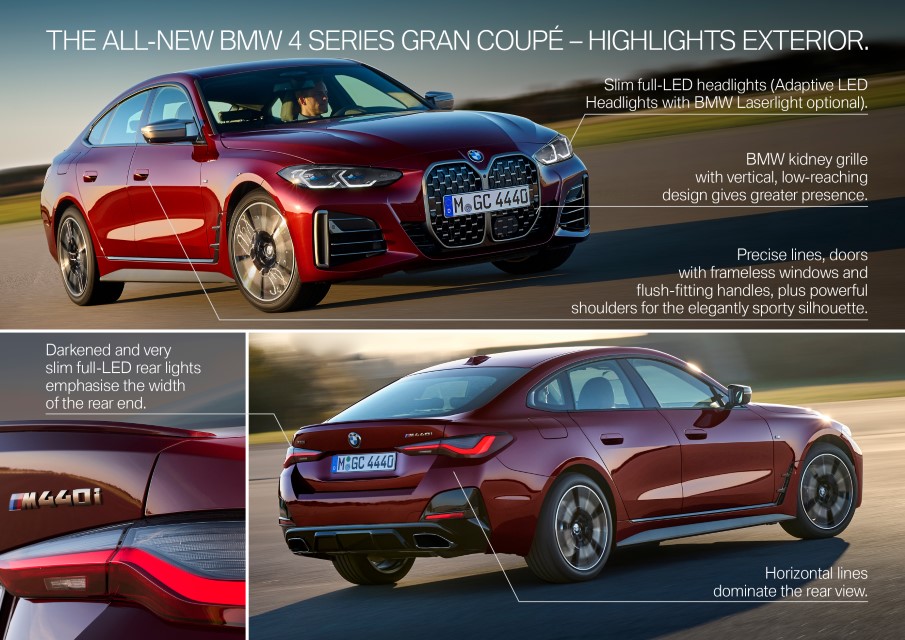 The six-cylinder in-line unit powering the M440iGC was developed with the racetrack expertise of BMW M GmbH and comes with weight-optimised pistons and con rods as well as a twin-scroll turbocharger with indirect charge air-cooling. It generates maximum output of 374hp from its 3.0-litre displacement with torque peaking at 500Nm. It can sprint from 0 to 100kph in 4.7 seconds. Its power is complemented by the distinctive-sounding standard M Sport exhaust system.

Upgraded BMW TwinPower Turbo technology has also enhanced the performance of the 2.0-litre four-cylinder petrol engines. The more powerful of the duo has an exhaust manifold integrated into the cylinder head for the first time, resulting in extremely effective exhaust cooling for even cleaner emissions. It generates 245hp and peak torque of 400Nm, enabling the new GC to accelerate to 100kph from rest in 6.2 seconds. 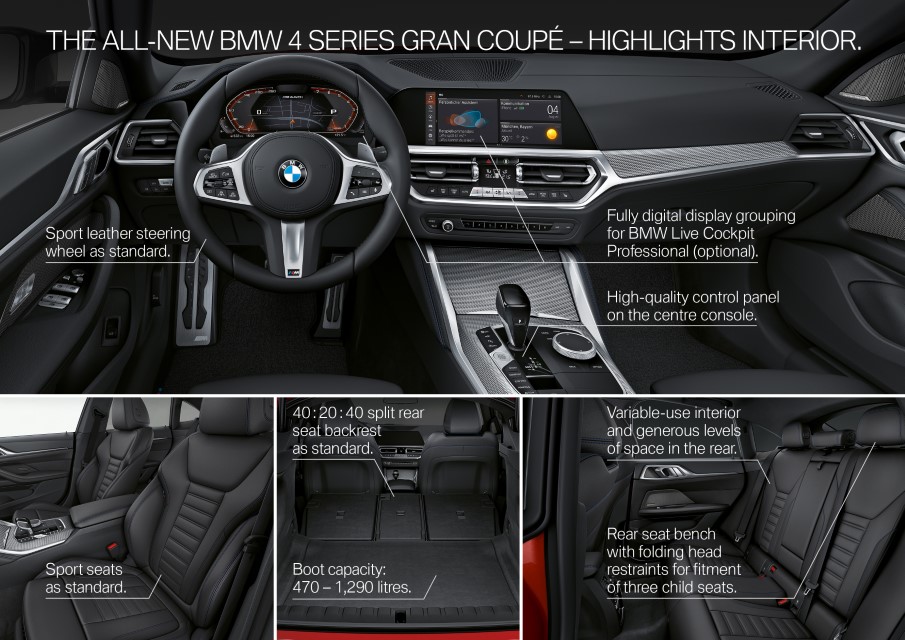 Eight-speed Steptronic Sport transmission as standard on all models.

Mild hybrid technology has been included with the straight-six petrol engine as well as the diesel unit. Here, a 48V starter-generator acts likes an electric drive unit that assists the engine, allowing it to operate within an efficiency-optimised load range as frequently as possible. It also offers an electric boost effect that adds an extra 11hp to give the power unit an even sharper response.

The power used for the electric boost drive is harvested almost entirely through Brake Energy Regeneration and stored in a separate battery that also supplies the electric energy for the 12V on-board power supply. 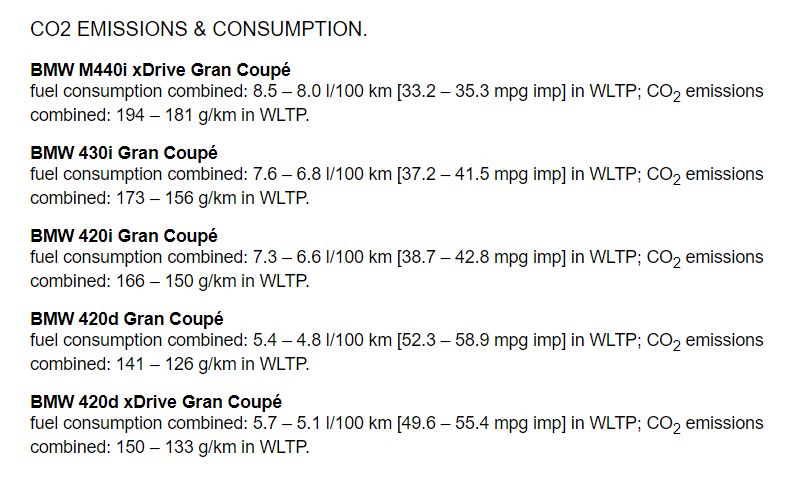 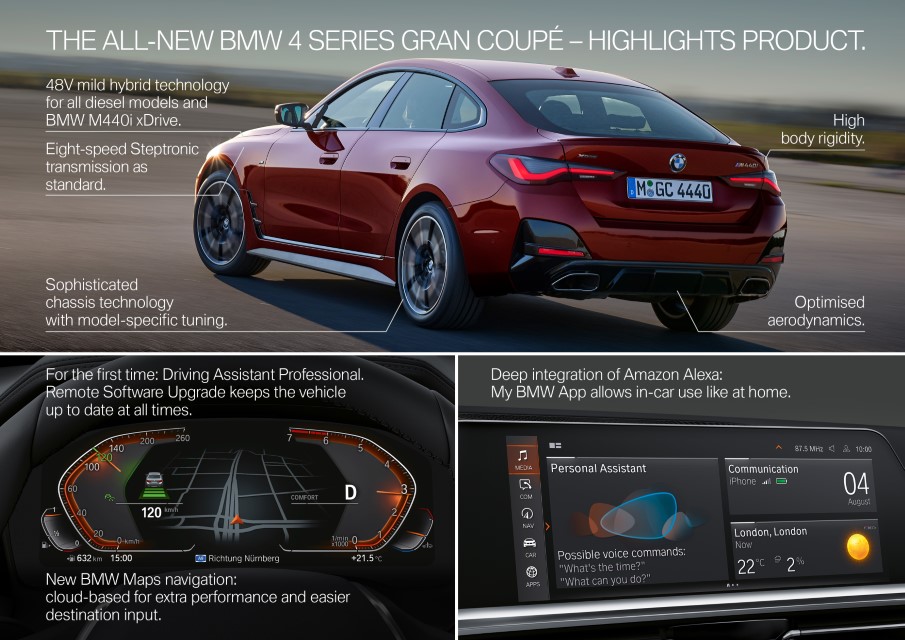