Home / News / Tesla to move its headquarters to Austin, Texas

Tesla to move its headquarters to Austin, Texas A scenic view of Austin. — Photo by Pierce Ingram/VisitAustinTX

SAN FRANCISCO: Tesla Inc. is moving its corporate headquarters to Austin, Texas, where a new factory for the Model Y and forthcoming Cybertruck is nearing completion, relocating from California after making the Golden State its home for 18 years.

Tesla has been based in Palo Alto, California, the leafy Silicon Valley suburb that’s home to Stanford University and several venture capital firms, since its founding in 2003.

But the company has grown from scrappy startup to the world’s most valuable automaker and Texas - centrally located between the two coasts - has become its centre of gravity in the US.

Musk’s decision to move the headquarters to Texas comes despite growing discomfort among some companies with the state’s policies, such as a recent abortion law - that’s been temporarily blocked - and efforts to restrict voter rights.

But Tesla is just the latest California company to move to Texas, which has lower taxes, a lower cost of living and fewer business regulations.

Hewlett Packard Enterprise Co. has shifted its base to Houston and Charles Schwab Corp. moved its headquarters to the Dallas area from San Francisco. 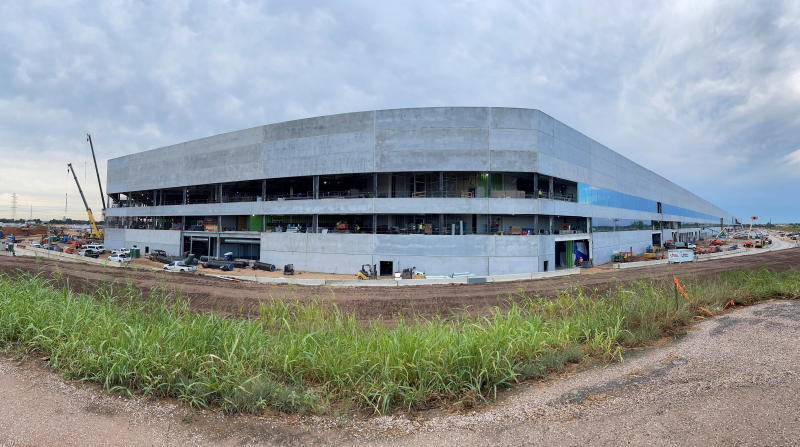 A Tesla factory is seen under construction in Austin last month. — Reuters

The carmaker joins a number of other tech companies with operations in Austin.

Dell Technologies was founded in the city, and Apple Inc. and Facebook Inc. have a large presence. Oracle Corp. said last year it was moving its headquarters to Austin from Silicon Valley, one of several transplants to the Texas state capital during the pandemic.

"This is the newest economic development trophy on Governor Abbott’s wall,” John Boyd, a corporate relocation consultant based in Princeton, New Jersey, said by phone on Thursday.

The move is important to the state’s efforts to attract tech talent and also to Tesla’s efforts to appeal to a wider swath of US consumers with the launch of its new pickup, he said.

"Tesla is trying to expand its brand and appeal to Middle America,” Boyd said.

Musk said Tesla isn’t abandoning California, noting the electric-car maker will continue to expand manufacturing in the state and aims to boost production at its vehicle factory in Fremont - and at its Nevada battery plant - by 50%.

"We will continue to expand our activities in California. This is not a matter of Tesla leaving California,” he said.

There have been several clues such a move was in the offing.

Musk, the world’s richest person according to the Bloomberg Billionaires Index, moved his private foundation to Texas in December.

Zachary Kirkhorn, Tesla’s chief financial officer, bought a house in a tony district of Austin and Tesla has datelined each of its last two press releases from Austin.

Musk moved to Texas himself last year to focus on two big priorities for his companies: SpaceX’s new Starship vehicle, under development on the Gulf Coast near Brownsville, and Tesla’s Gigafactory in Austin. Texas is the company’s third-biggest market in the US after California and Florida, though years of opposition from auto dealers mean it can’t sell its electric cars directly there.

In 2010, Tesla bought a shuttered auto plant across the San Francisco Bay in Fremont.

Roughly 10,000 people work at the plant, a former joint venture between General Motors Co. and Toyota Motor Corp., and scores of other Tesla employees work at showrooms, service centres and offices throughout the region.

Musk’s long-term relationship with California soured in the spring of 2020 during the first wave of the coronavirus.

He briefly sued the county, but Tesla has continued to expand its footprint in the Golden State.

A new "Megafactory” that will make Mega packs - the energy-storage product Tesla sells to utilities - is under construction in the Central Valley city of Lathrop.