The premium mid-size Jaguar XE is clearly slated to take on the German brands – BMW 3 Series, Mercedes-Benz C-Class and Audi A4 – and Jaguar Land Rover (JLR) didn’t hold back on coming out with a worthy rival.

Developed from a new platform, the XE is a rear wheel-drive car making it a complete change from the front wheel-drive X-Type (which was based on the Ford Mondeo platform as Jaguar was under the Ford Motor group at the time) that it replaces.

Now that JLR is under the Tata Group, Jaguar’s new direction is to develop all its models on a clean slate and it appears there is no holding back on the research and development costs, although some ideas and concepts were taken from existing bases in the Land Rover range.

It comes as no surprise then that the XE is built on a new dedicated line at the Solihull factory, which was once solely the production base for Land Rovers and Range Rovers, tapping no less on existing synergies.

Another similar direction is the greater use of aluminium in body construction and the XE boasts of an aluminium intensive monocoque body, mirroring that of the Range Rover models.

With 75% of the body being made of aluminium, Jaguar says this makes its XE the only car in the class to have such lightweight construction of the body.

Unlike the XJ, XK and F-Type that were developed using “exceptionally stiff bonded and riveted aluminium” structures, the XE is the latest model to use this aerospace-inspired technology. In addition, Jaguar says the XE’s body is the first car in the world to use a new grade of high-strength aluminium (RC 5754) that is developed specifically for this model.

In body styling, the XE maintains a similar profile to the XJ with the large mesh grille that carries the distinctive snarling Jaguar head logo.

With computer-aided design (CAD) that is widely used by carmakers in shaping their respective cars along aerodynamic guidelines, the XE has lost a fair bit of Jaguar’s iconic styling individuality and that is a price to pay for modern technology. Nevertheless, good positioning of the Jaguar logos in front and rear (where a leaping Jaguar is located on the bootlid) gives the XE the connection to its rich lineage and heritage.

With the drag co-efficient value of 0.26, the XE is also hailed as the most aerodynamic Jaguar ever, matching some of its German rivals.

The XE body has a fastback four-door profile, this being the long nose, short rear platform to give it a sense of speed and sportiness from a stationary standpoint to justify its sports saloon image.

Moving to the interior, the boot offers the expected volume to accommodate luggage for four people, aided by the 40:20:40 split rear seatrest in extending storage space, but the rear passenger legroom did seem a little wanting; it reminded us of the earlier BMW 3 Series model. The transmission options remain constant across the model range, being the six-speed manual or eight-speed automatic; steering wheel paddle shifters are standard and drive selection is made via a rotary knob on the central console a la Range Rover Evoque.

During the global media drive in the north of Spain, which included a full-bore track session at the Navarra race circuit, we got to drive four different variants.

In suspension design, the XE retains the double wishbone base of the X-Type honed further for a sporty feel and the rear has an integral link set-up that is said to deliver sharp handling and a luxury ride.

Components of the suspension system are made from either cast or forged aluminium to achieve a lightweight construction.

For all the four XE variants we drove, there was a choice of choosing the suspension performance, beginning with the ECO damping to standard and dynamic.

Like many cars today, the steering is electrically assisted, again making the XE the first Jaguar to use this feature, with the claim that the immediate response and connected feel are retained.

With the cars provided being pre-production types, we had expected some variations in feel from variant to variant as different settings could be used for the evaluation process, and we were not wrong. The first and fourth XE variants had the pliant suspension we liked while the second and third had a hard setting that was less comfortable; it made no difference choosing from ECO to dynamic for the latter.

As our first two XEs were diesel variants with different power outputs that surprised us with their overall performance.

Again, before we started our drive from the Vittoria airport, we were warned about keeping to speed limits, in particular when driving through the many villages and towns along the route.

We complied with that, taking some liberties only when clear country stretches or highways allowed us to explore the upper end of the their engine performance.

Although the track drive gave us the extreme view, it was the normal road driving experience that provided a better perspective of the XE.

In most cases, the two turbodiesels, the higher output 2.0-litre turbo petrol and supercharged 3.0-litre V6, gave a good account of the respective car’s driving manners and dynamic character through the winding areas.

Our favourite variant was the punchy XE S 3.0 V6. We revelled in the guttural roar of the exhaust each time we floored the accelerator when opportunity allowed and the V6 flexed its muscle readily during passing manoeuvres.

The electric power assisted steering gave us reasonably good directional feel to be confident pushing the respective XE variants through the corners; the minimal body movement helped as well.

On the highway, the XE clearly exuded its premium standing with a quiet ride and wind noise around the usual areas was largely ignored.

We also liked the laser head-up display (HUD) that projects high-contrast colour images onto the windscreen; its use is said to be an industry first and the system is smaller and a third lighter than existing systems.

If there is a chink in the XE’s armour, it has to be the rather low grade graphics of the GPS information on the eight-inch touchscreen display at the centre of the dashboard.

The track drive was an interesting one: this was conducted using the XE S supercharged 3.0-litre V6 around the 3.9km Navarra race circuit.

Our driving instructor, Adriano Medeiros, is a Brazilian who had been in this profession for 12 years in Europe and did some racing, including Formula 2.

Medeiros took us two laps to show the ropes in getting the most out of the XE, following which we took over for three laps to apply those “instructions” at a fast trot.

Following a break, we had a full bore run in a timed and recorded distance of five laps.

Firstly, we were asked to hold the steering firmly and turn into the corner without letting go of it, similar to what you see during close-up shots of the Formula 1 driver’s cockpit. The trouble was that we were so comfortable with the shuffle method we were taught in the early 1980s that it was hard to break 30 years of this steering habit.

Rather than messing up our drive, we stuck to our habit and could still take each lap at good speeds, overtaking one other car in a controlled manner.

The XE is almost as good as the BMW M3 sedan we drove last year; the slight lack of directional feel and greater body lean through the corners are the main drawbacks.

We had the XE’s rear out in an oversteer once for powering up too soon when exiting from a tight corner.

But with Medeiros’ advice on when to feather or slam on the brakes, and when to lift-off or floor the accelerator in subsequent laps, this Jaguar track experience was an enjoyable one, despite an off track excursion on the last lap.

You can expect this dynamic and sporty XE to arrive here by the end of the year, or early next year at the latest. 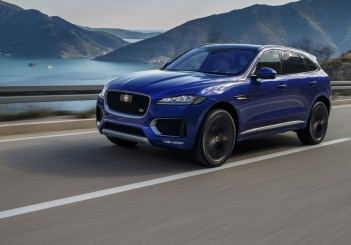 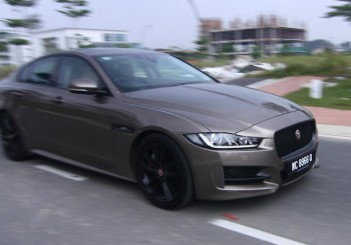