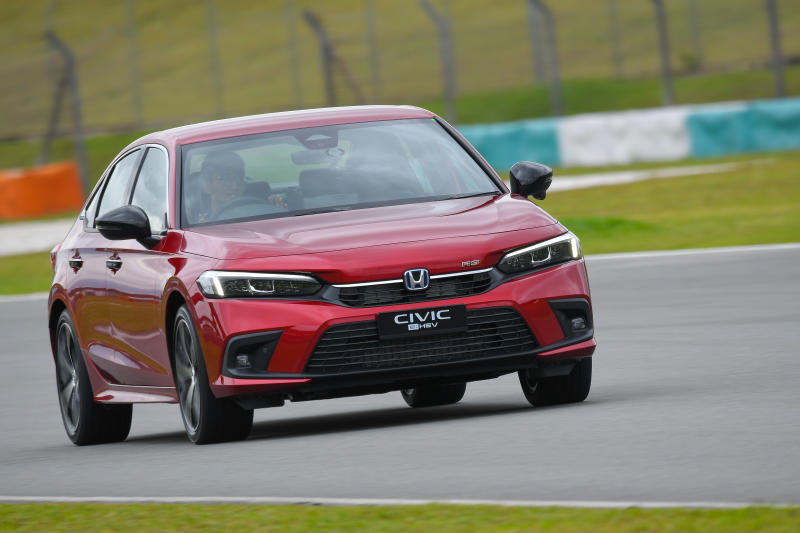 Hybrid cars with the immediate application of strong electric torque are the reason why they take off quicker in a standing start, such as 0-100kph sprints, against non-hybrid vehicles.

It is following the strong initial take-off that the non-hybrid cars pick up the speed better to overtake the hybrid vehicles before hitting 100kph. 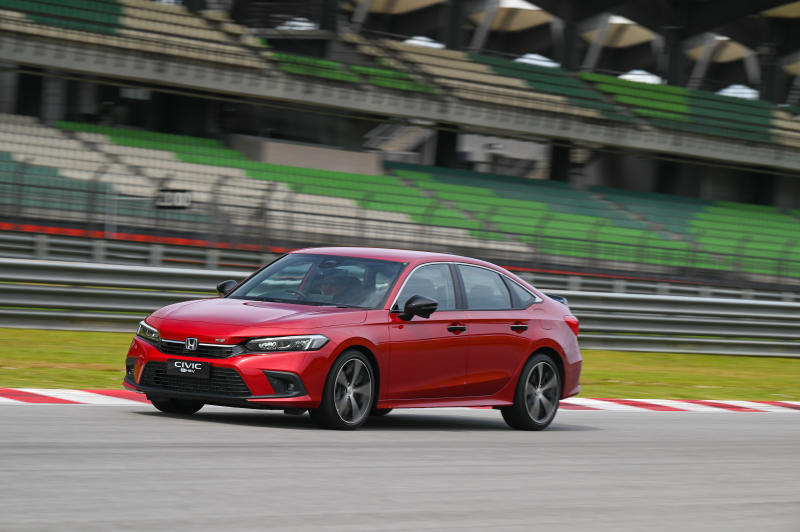 Honda has again come to the fore on car hybrid development that would ensure its hybrid cars would stay ahead at 100kph and beyond.

This came in the form of the Civic e:HEV RS that we had a media preview of at the Sepang International Circuit recently.

Honda Malaysia didn’t include this hybrid variant when the latest generation Civic model was launched in January this year as end-stage development and road trials were on-going then. 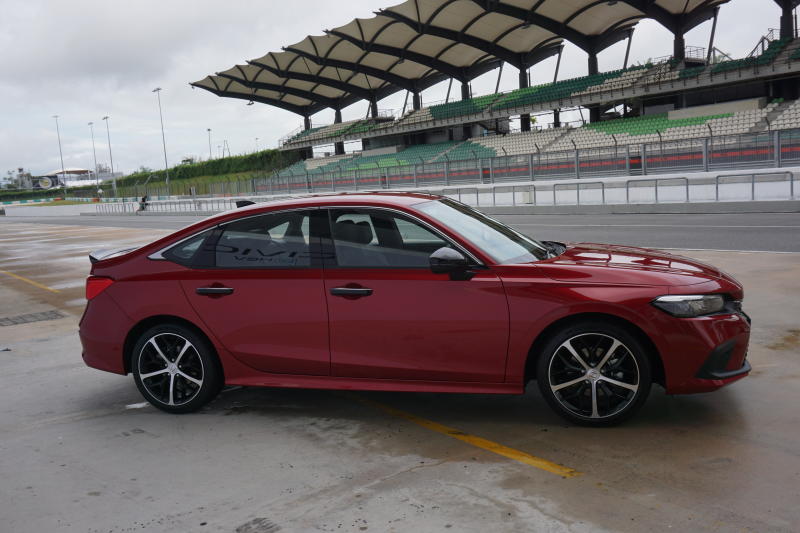 The stronger performance of the Civic e:HEV RS hybrid might initially be expected to come from the bigger displacement engine; it’s a 2.0-litre Atkinson Cycle unit against the turbocharged variants that have a 1.5-litre capacity.

This is where that expectation is flawed based on how the latest Honda hybrid engines that feature the i-MMD (intelligent multi-mode drive) operate. 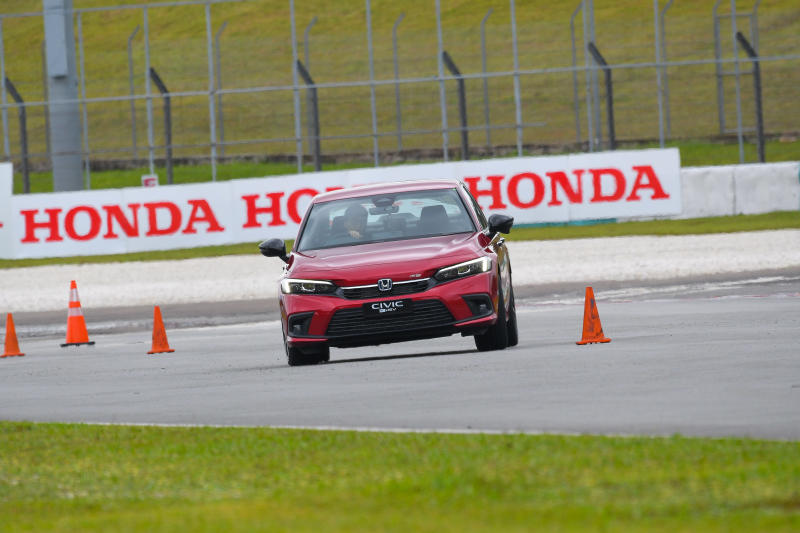 Honda has developed its latest hybrid power system to function more like an electric vehicle than was the case previously.

Given that scenario, the choice of a bigger displacement engine leans more to its capability to charge the lithium-ion battery that provides the electric power for the Civic’s acceleration. 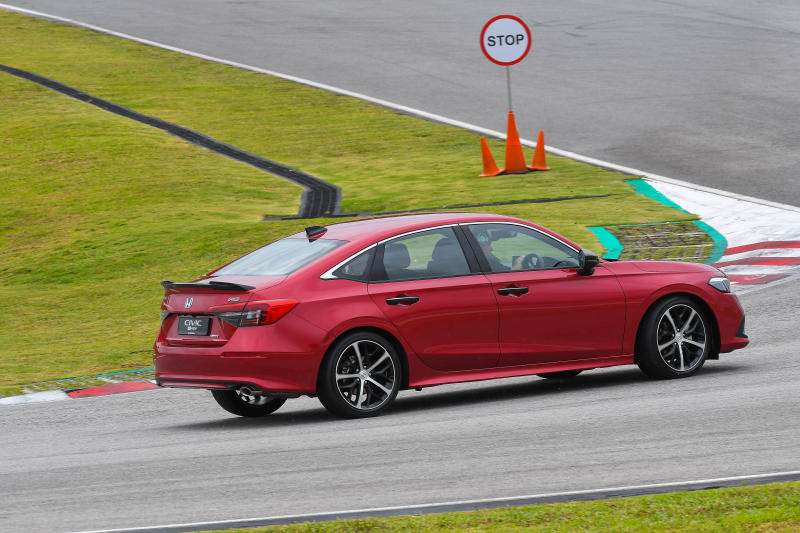 Helping to charge the battery is the bigger regeneration system so that there is a constant flow of electricity to drive the vehicle and operate all the electric equipment on board.

The electric motor that drives the front wheels directly also has more ‘muscle’ being rated at 184PS and comparatively humongous torque at 315Nm.

By comparison, the 2.0-litre Atkinson Cycle engine delivers a tamer 143PS at 6,000rpm and 189Nm at 4,000rpm being a more efficient running unit than a powerful one. 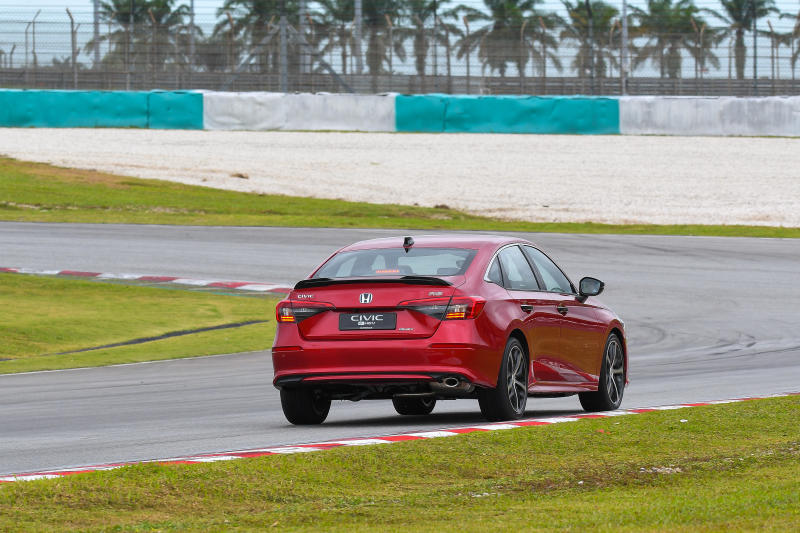 During the Sepang media preview, Honda Malaysia gave us an idea of the Civic hybrid’s quicker acceleration prowess against the Civic RS turbo as well as its better handling dynamics along part of the race circuit.

We took turns driving the respective car and we chose to start with the Civic turbo that cranked out 182PS and 240Nm of torque; we clocked the 0-100kph run in 9.0 seconds and on all three runs, we were outgunned off the line by the other media person in the Civic hybrid.


Changing over to the Civic hybrid, we could feel why it was faster off the line the moment we hit the accelerator pedal. 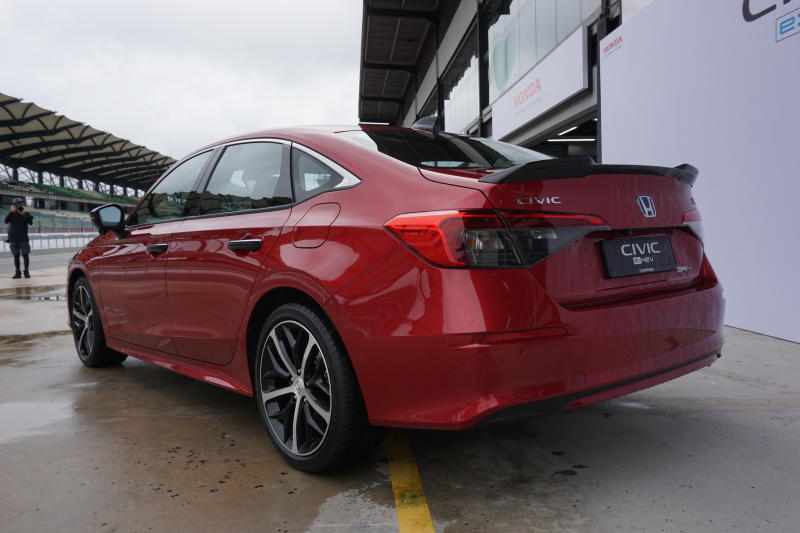 That 315Nm of torque that immediately came into play gave us that strong forward momentum like the Civic turbo that had a slight lag.


We weren’t that much faster at 100kph, having clocked 8.7 seconds, but we were ahead of the Civic turbo nonetheless.

This has definitely given Honda hybrid driving a new perspective; along with good fuel economy (Honda says the Civic hybrid would return 25km/l), it would give the Civic turbo a good run for the money in strong acceleration too. 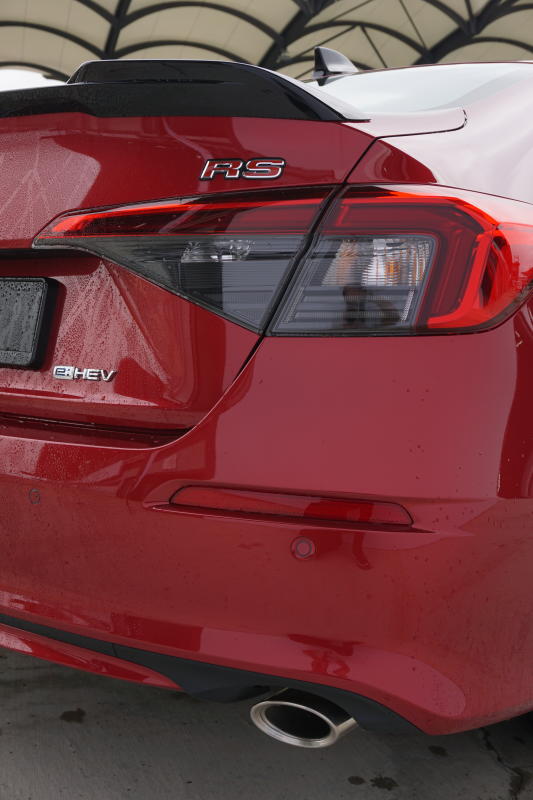 At the same time, Honda has given the Civic hybrid better handling dynamics too so that it would be as much fun to drive as the Civic turbo, if not better.

The hybrid variant weighs more than the Civic turbo due to the heavy high voltage battery, ancillary cabling and regenerating components. 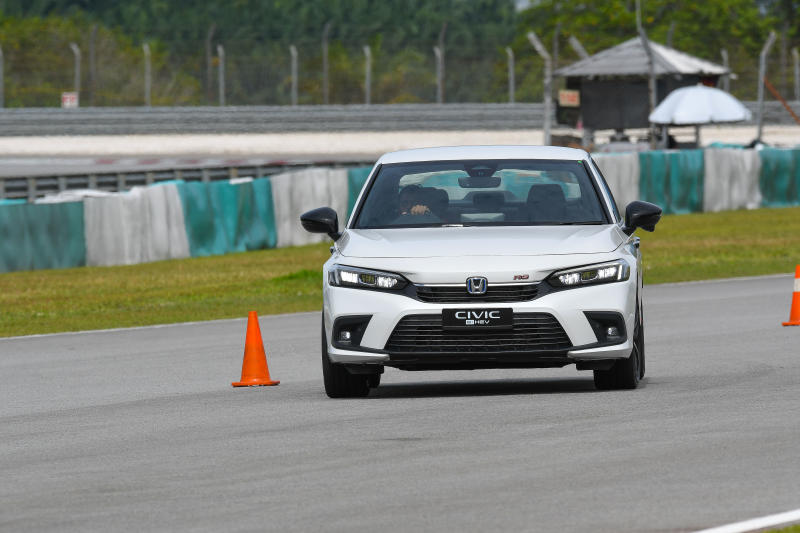 However, Honda has tuned the suspension system – MacPherson strut front and multi-link rear – to accommodate the additional weight.


Apparently, the Civic hybrid’s centre of gravity is lower than that of the Civic turbo and this has also contributed to its more positive handling qualities. 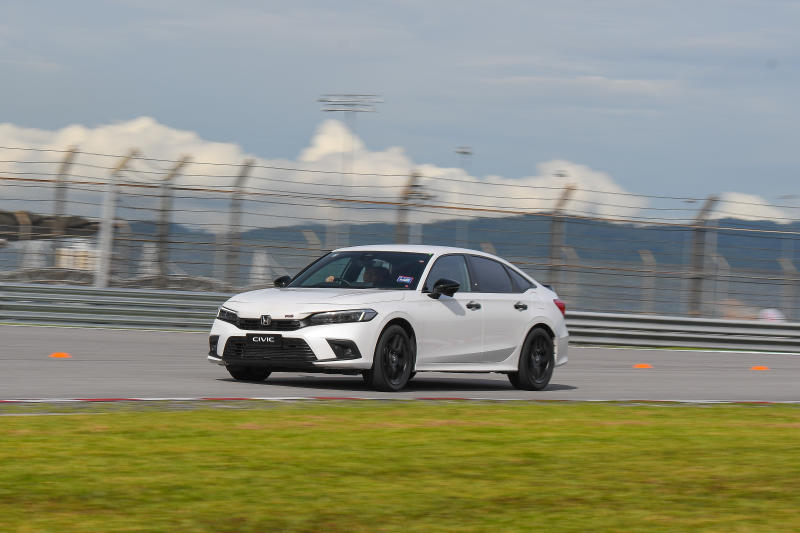 To experience this for ourselves, we had a go in both Civic variants in succession over the designated route that has a slalom, acceleration point and a couple of corners – a tight one followed by a demanding sweeper.

The immediate strong initial acceleration in the Civic hybrid was again enjoyed as the car picked up the pace quickly. 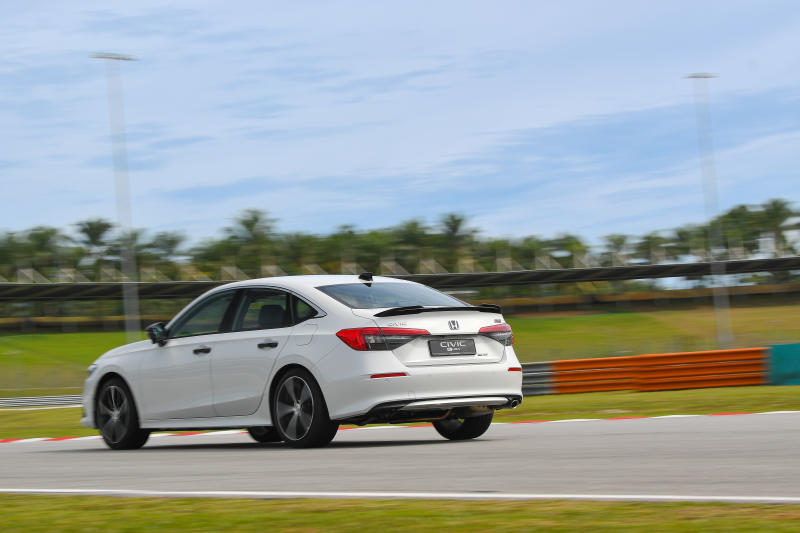 We could take to the slalom at a speed that we found more difficult to manage with the Civic turbo.

At the acceleration point, as the race track was wet, the immediate strong torque led to front wheel spin although this was not experienced in the Civic turbo. 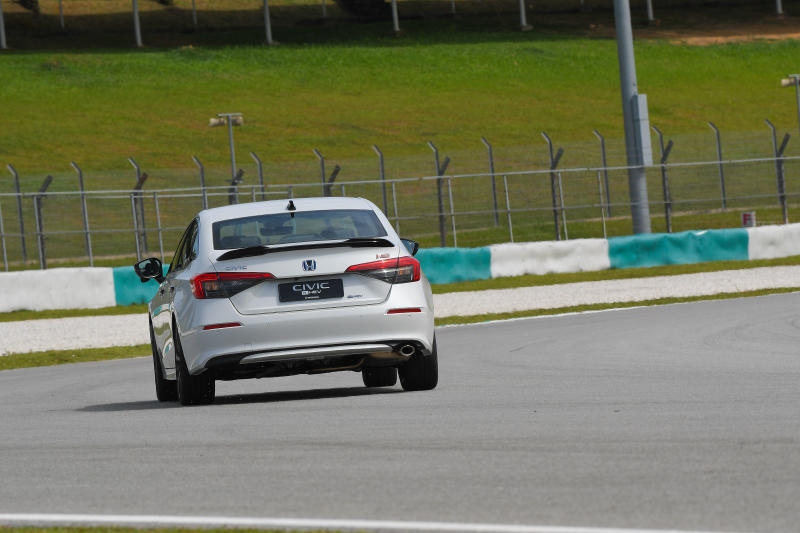 We found that we could take the Civic hybrid through the two successive corners at a higher speed than the Civic turbo too.

Yes, Honda has indeed transformed its hybrid models from being merely fuel misers to sporty and fun-to-drive cars.